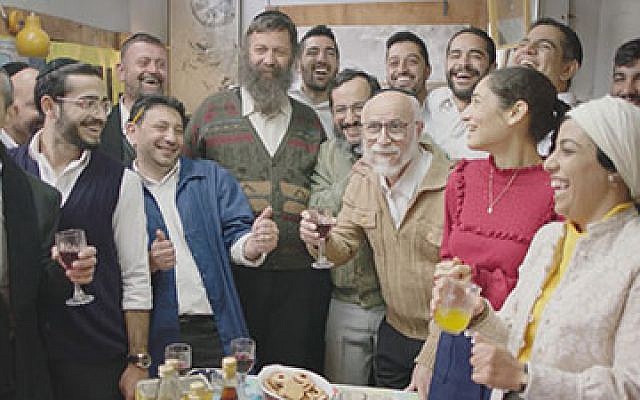 On Tuesday, June 4, JOFA co-sponsored a screening of the film The Unorthodox as part of the 2019 Israeli Film Festival at the Marlene Meyerson JCC of Manhattan. The film is based on the true story of the early days of the Shas political party in Israel. After the showing, audience members had the opportunity to participate in a Questions and Answers session with one of the film’s actors, Yoav Levi (Yigal).

Throughout the film, I found myself pondering why JOFA chose this particular film to co-sponsor. The film features only a handful of women and, quite frankly, fails the Bechdel test of female representation. Furthermore, while the movie shows the significant effort that Shas has made in attempting to remedy the discrimination against Sephardic Jews in Israel, noticeably absent is any discussion of the treatment of women within the Israeli Orthodox political scene.

But feminism, and especially intersectional feminism, is about the acknowledgement that marginalization and discrimination do not exist in unique and clear vacuums.

The term “intersectional feminism” was famously coined by law professor Kimberlé Crenshaw discussing a 1976 court case against General Motors, in which the company refused to hire black women but was found not guilty of both sex-based and race-based discrimination, because the company did hire women (white women) and black people (black men). What we now recognize is that discrimination comes from a variety of factors, and we cannot ignore the stories and experiences of other marginalized groups.

The Unorthodox tells the story of the founding of the Shas party in Israel. The protagonist, Yaakov Cohen (Shuli Rand), is moved to create a religious Sephardic political party after his daughter, Heli (Or Lumbrozo), is expelled from school because of her Sephardic heritage. In one particularly poignant scene, the school administrator accidentally refers to Heli by the name of a different Sephardic student in a different class, indicating how the school views Sephardic students as basically interchangeable. In another scene, an Ashkenazic client and politician refuses to pay Cohen for a significant amount of work he’s already completed. The client challenges Cohen to sue him in the rabbinic courts, knowing that the courts would favor the well-respected Ashkenazic leader over the struggling Sephardic businessman. Turned off by the corruption within the mainstream rabbinic institutions, Cohen is moved to put together a grass roots movement to advance the needs of the Sephardic Orthodox community, eventually becoming the Shas party, now a major player in the Israeli political scene.

After watching the film, viewers are left with a hopeful spirit, that the growth and survival of the Shas party all these years later has greatly improved the lives of Sephardic communities throughout Israel.

After the showing, actor Yoav Levi discussed the film with the audience. In response to an audience member’s question about the current state of Sephardic discrimination in Israel, Levi told the audience that institutional racism against Sephardic Jews is no longer a problem in Israel, thanks in part to the efforts of the Shas party. He noted that there may still be pockets and small areas where this type of racism is still prevalent, but that as a whole the country no longer experiences this.

However, as recently as 2010, Slonimer Hasidim in the Israeli town of Immanuel made headlines for refusing to comply with a court order requiring the town to integrate the Ashkenzic and Sephardic religious girls’ schools.

Still, the simple fact of the popularity of the Shas party is a testament to how the country is acknowledging and attempting to address anti-Sephardic discrimination.

One can only hope that the party—and the country—will take the lessons that it learned during the party’s formation and rise to power to address the still present discrimination against women.

The films early scenes of Sephardic children being banned from schools, theft of Sephardic businesses, and violent intimidation against those that dared to oppose the mainstream rabbinic leadership are eerily reminiscent of the statements just a few years ago of leading haredi rabbis in Israel regarding women in politics. In response to a group of haredi women seeking representation within the political parties, Rabbi Mordechai Blau, a leader of the haredi Agudat Yisrael party, was quoted in 2015 by Israeli newspaper Haaretz as saying that any woman who “comes close to a party without the leadership of the great sages of Israel will find herself without a ketubah, forbidden to study in the educational institutions, and her business boycotted.”

There has never been a female MK from the Shas party. Adina Bar-Shalom, the daughter of the late Shas leader Rabbi Ovadia Yosef, had to face the difficult choice of running for office under a different political party or remaining with Shas behind the scenes, as Shas still does not allow women to run for office. Ultimately, she chose to stay behind the scenes of the her father’s party. It is unfortunate that she had to make this choice at all.

Shas has done significant work in fighting discrimination, but there is still much more work to be done. We should take to heart the messages of revolution, upheaval, and equality portrayed so elegantly within The Unorthodox to continue to fight injustice, be it race-based, sex-based, or any other combination of factors.

Beverly Gertler is an attorney and a feminist. She currently lives in New Jersey with her spouse, David, and her daughter, Sarina.