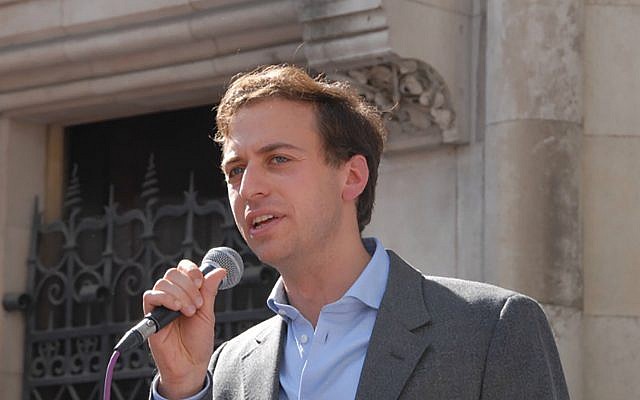 JTA  On a recent speaking tour in North America, I was asked repeatedly about anti-Semitism in the Labour Party and Jeremy Corbyn.

Corbyn’s Labour has become an existential threat to British Jews, and audiences smartly inquired what could be done to stop growing anti-Semitism in U.K. politics from endangering Britain’s Jews.

We hear from members of our community constantly that they are preparing to leave the country should Corbyn become prime minister.

At Campaign Against Anti-Semitism, the volunteer-run charity that I am proud to lead, we have been at the forefront of calling out Labour in the media. This media campaign has borne fruit: According to a May 17 YouGov survey, 80 percent of British voters are now aware of Labour’s anti-Semitism crisis, and just 19 percent are still convinced by Labour and Corbyn’s arguments that they are not anti-Semitic.

But media campaigning alone is insufficient, and we needed to hold Labour to account — not just in the media, but in a way that Corbyn and his acolytes could not deflect or avoid.

That’s why we appealed to the Equality and Human Rights Commission, the U.K.’s equality watchdog, which last week announced a full statutory investigation into anti-Semitism in Labour.

Campaign Against Anti-Semitism first contacted the EHRC during Labour’s annual conference in 2017, when fringe activists demanded the right to debate “Holocaust: yes or no” and senior figures claimed that anti-Semitism allegations were mere “mood music.” We followed up by formally referring the party to the EHRC in 2018, submitting legal arguments and extensive dossiers of evidence.

With last week’s unprecedented announcement of a full statutory inquiry, Labour will finally be held accountable for the way it has emboldened Jew-haters in its party and institutionalized anti-Semitism.

Labour’s leader, Jeremy Corbyn, has played an outsized role in enabling the torrent of anti-Semitic incidents flowing from the once anti-racist Labour Party.

He has his own history of anti-Semitism: He has blamed Islamist terrorist attacks on Israel, defended an appalling anti-Semitic mural, called for Holocaust Memorial Day, to be renamed Genocide Memorial Day, participated in a ceremony honoring the Black September terrorists, described British Zionists as having “no sense of English irony” and much more.

So far, nine members of Labour have quit the party in protest as it slides into what one New York Times opinion writer described as Corbyn’s “rule by diktat.” How did we British Jews arrive at such a dire situation?

For years, British Jews watched and failed to do enough as the far-left allied with Islamists, and as their warped hatred took hold on university campuses and in sections of the media.

Then, in 2015, hundreds of thousands of new activists joined Labour, many of them from the far-left, following a change in membership rules which reduced membership fees to only three pounds per year. They wasted no time in electing the little-known Jeremy Corbyn to lead them.

Soon after Corbyn’s improbable ascent to the Labour leadership, we saw two changes: Anti-Semites in the party, who saw Corbyn as a kindred spirit, became bolder, and those anti-Semites ceased to be firmly punished, thereby emboldening others. One of the first, Sir Gerald Kaufman, claimed at an event in Parliament that British Jews donated to the Conservative Party so that Israeli Jews could kill what he referred to as “Arab-looking people.” Corbyn took no action.

Over the following months and years, more and more cases began to pile up, but in most cases, Labour dithered over how to treat Holocaust deniers and anti-Jewish conspiracy theorists, often excusing them and welcoming them back into the fold.

As this cycle developed, the sound of anti-Semitism grew, and it now roars from Labour’s grassroots with the support or acquiescence of its leadership.

Under Corbyn, the machinery of the party has been corrupted to excuse anti-Semitism while punishing those who stand up against it. Meanwhile, prominent Party figures deny anti-Semitism by claiming that it is just a “smear” campaign by Jews.

As revelations about Corbyn’s own past emerged, many of us felt that we were dealing with an anti-Semite steadily allowing the institutionalization of anti-Semitism within his party. Matters have degenerated to the point where two weeks ago, Hamas issued a statement to “salute” Corbyn.

By launching a statutory investigation, the EHRC has activated its full range of legal powers.

In Britain, like much of the rest of the world, the worst kinds of verbal abuse and incitement are criminal offenses, and discrimination on the basis of race or religion is unlawful.

The EHRC can demand witness testimony from Labour leaders and compel the production of internal party communications, even WhatsApp messages and emails. The EHRC can also seek court injunctions against Labour to prevent further anti-Semitic acts.

The EHRC has agreed with our recommendations to conduct a root-and-branch examination not only of anti-Semitism in Labour, but also of how the party’s processes and decisions have contributed to its rise. The EHRC will even refer to the International Definition of Anti-Semitism that Corbyn struggled so hard to avoid adopting because he claimed that it would be anti-Palestinian to use it.

The investigation will take about a year, during which time, as complainant, Campaign Against Anti-Semitism will engage continually with the EHRC.

We did not seek this investigation lightly: Our volunteers and staff have devoted many hundreds of hours to securing this intervention, and now that the investigation has begun, we have much more expensive legal work ahead.

There are lessons to be learned in North America from our experiences in Britain, particularly with a similar dynamic starting to play out on the far left.

Communities elsewhere should learn from the mistakes made in Britain. Do not dismiss anti-Semites as fringe lunatics: They breed on the extremes of society and eventually seep into the mainstream. Use the media and litigation to take the fight to the anti-Semites. Ensure that anti-Semites face ruinous consequences for their actions, and learn from our experiences: When asked by communities around the world for assistance, we stand ready to help.

Gideon Falter is chief executive of Campaign Against Antisemitism in the UK.