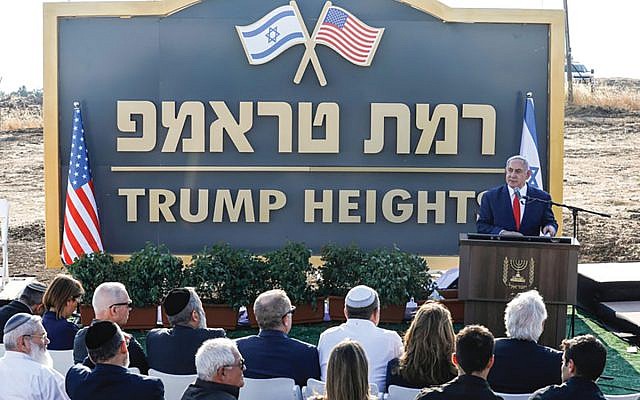 What’s in a settlement name? Israeli Prime Minister Benjamin at Sunday’s unveiling of the proposed “Trump Heights” settlement in the Golan. Getty Images

On the one hand, Israel’s establishment of the new Golan village, “Ramat Trump” (“Trump Heights”), was “a gift” to the president for recently recognizing Israeli sovereignty over the Golan Heights, the only world leader to do so since Israel captured it in the Six-Day War. Trump is only the second sitting president to have an Israeli place named for him, after Kfar Truman, a moshav honoring President Truman in 1949.

At the ceremony last week, Prime Minister Netanyahu said American recognition “is a milestone in the history of Golan.” Trump is a “friend who did things for the country,” along with moving the U.S. embassy to Jerusalem, that “were not done in the past and should have been done in the name of justice and truth.” President Trump tweeted from the White House, “Thank you Mr. Prime Minister, a great honor!”

On the other hand, the naming of Ramat Trump, some joked, was reminiscent of the famous scene in “Sallah Shabati,” the 1964 Israeli comedy, in which, next to a sapling, a makeshift sign names a forest for a character named Simon Birnbaum, an American donor. When Birnbaum leaves, the “Birnbaum” sign is yanked up and a new sign is stuck in the ground, naming the forest for the next American donor, arriving in the next taxi.

Knesset member Zvi Hauser, the opposition founder of the Knesset caucus for the Golan, observed: “Anyone who reads the fine print …  understands” Ramat Trump is not much more than its wooden sign. “There is no funding. There is no planning. There is no location.” It was reported that Hauser called it an “Israbluff,” an Israeli comedy term for avoiding a problem by a fictional solution.

In New York, some of Trump’s Orthodox base cheered the gesture, even if a gesture is all it is, and during an election season, at that.

Larry Spiewak, the Orthodox chair of both the Council of Jewish Organizations of Flatbush and Chai Lifeline, called Ramat Trump “Hakaras HaTov [proper gratitude] for what the president has done and is trying to do, for having us in mind at all times, not only with the Golan but with the embassy and standing strong regarding Iran.” Spiewak said Trump “thinks like an Israeli,” defiant of negative world opinion. “In 50 years, no one else ever backed Israel’s right to the Golan, and we’ve had presidents who were good friends of Israel, but no one did anything until Trump.”

Nachman Mostofsky, director of Chovivei Zion, a political affiliate of the National Council of Young Israel, told us that he liked the idea of Ramat Trump because “Trump has been the best president for the State of Israel, probably in history.”

Cynics could be forgiven for pointing out that the “new” village was first established under a different name in 1992 but has not been developed in 27 years. Ramat Trump awaits approval until a new government is formed, likely in the autumn. Ramat Trump is expected to house 97 families, and reportedly received around 100 inquiries, mostly from American Jews.