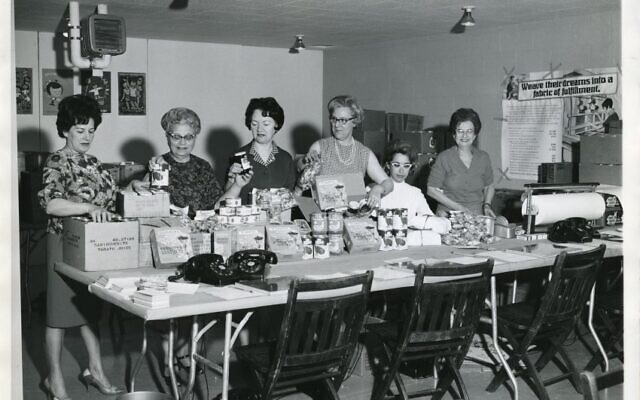 Members of the Jewish Welfare Board, in an undated photograph, pack canned goods for servicemen. (Flickr Commons/Jewish Museum of Maryland)

The history of American Jewish philanthropy is often told as a triumph of self-help over hardship and prejudice. Whether building Jewish hospitals or raising millions for Israel, the story went, Jews drew on a tradition of tzedakah to create a vast network of support for widows, orphans and refugees.

In “The American Jewish Philanthropic Complex” (Princeton University Press), historian Lila Corwin Berman tells a more complicated story. Private Jewish philanthropy was not completely homegrown, she writes, but grew with and prospered as a result of a series of deliberate policy choices by the American state. The tax code, she writes, essentially subsidized charitable giving, and regulated Jewish philanthropy in ways that aligned it with American capitalism – and not always for the better.

A large part of her focus is the astronomic rise since the 1980s of donor-advised funds and other endowment instruments that allow donors to silo away their charitable capital while allocating only a small portion to current needs. The result, she warns, turns charities into financial service entities, while capturing money that could better help society if it were put back into circulation.

What sounds like a technical argument is actually a timely examination of how the American way of giving fosters, and all too often hinders, social change.

Berman, who holds the Murray Friedman Chair of American Jewish History at Temple University, spoke to The Jewish Week from her home outside Philadelphia.

Let’s start with definitions. What is the Jewish philanthropic complex, and how much money does it raise or control?

Some studies have put it at $24-26 billion, some say almost double that. It really depends on how you define Jewish philanthropy. Is money that goes to anything in Israel counted as Jewish philanthropy? I was interested in the fact that this is a massive, multibillion dollar institutional complex, but around which there is a lot self-consciousness. On one side, people want to note that these institutions have real heft and incredible significance and value. On the flip side, some are concerned that telling how much money is held in philanthropic bodies raises concerns and canards about Jews and financial power.

How do you relate to Jewish philanthropy personally, in your job, your home life, the things you belong to?

I am the product of Jewish philanthropy. I went to Israel as teenager on a trip paid for by the federation and particular donors. In grad school I had a fellowship from the Wexner Foundation that paid for my tuition and living expenses. I had an assistant professorship paid for by a Cleveland family, and now my salary is partly paid by a Jewish philanthropy. At home we subscribed to PJ Library — I could go on.

That means I have an obligation to understand it, understand the family I came from. Like the Wexner Fellowship — all this stuff comes out about Leslie Wexner and Jeffrey Epstein [and the philanthropist’s financial ties with the late investor and convicted sex offender], and I have to not just ask if the money is tainted, but how does this shape how we approach our world and be made to feel that this is natural and inevitable? What are the policies and structures behind these relationships?

Why call it a “complex”? 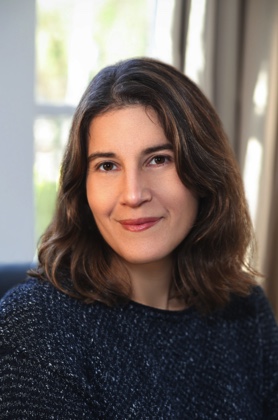 I think it offers vivid imagery for the way American Jewish philanthropy lashes together multiple different forces. Most of the literature focuses on Jewish communal goals and the missions of institutions, along with questions of Jewish identity, assimilation, etc. What tends to be missing is the way American policy ties in to create the structures we know today. It’s more than simply Jews giving to causes that help the Jewish people. Jewish philanthropy wouldn’t be what it is if not for American tax policy, or political shifts and how people in the ’60s, ’70s and ’80s thought about wealth, with ideas like trickle-down economics and how a lot of money at the top is good for many people.

Trickle-down is the Reagan-era idea, encouraged by low taxes and financial deregulation, that if wealth is concentrated in private hands it would be put to use for the public good. You suggest that tax reform, cuts to social welfare spending and financial deregulation turned charities and especially endowment-giving into instruments of Reaganomics.

Endowments allow a lot of money to accumulate in particular places without any impetus to circulate that money. It gestures toward future circulation of funds as opposed to present circulation. At the same time free market economic ideas are coming out [in the ’80s] as a counterbalance to social welfare ideas, saying that those who amass a lot of capital should be able to do that unbridled by regulations. It came with a faith that a lot of money held in the hands of a few people is a good thing for the public.

I see that in philanthropy, in the growing accumulation of philanthropic capital and massive Jewish family foundations: a faith that this is good for the public.

But isn’t it? The Jewish community captures this enormous wealth, and through donor-advised funds and other endowment assets, some money is spent today and much is held in reserve for a rainy day.

If you are living in a time of incredible prosperity, when the vast majority of people have their needs met in an economy that is booming for all people and a tax code that evens out prosperity, then the idea you just described would not necessarily be a problem.

What kind of democracy can function under these kinds of economics?

However, at a time when this kind of idyllic prosperity is not the case, a great deal of money is sewn up in these funds, which can pay out at 5 percent under the law and tend not to do more than that. What is the future that this money is waiting to serve? In the 1920s through the 1940s, Jewish federations eschewed the idea of endowments, saying that there are needs to be met today, while assuming there would be future assets as well.

That surprised me – you detail how the big community chest philanthropies like the New York and Chicago federations resisted the idea of endowments, because they wanted to focus on rapidly redistributing wealth for immediate needs.

Organizations used to have really strict rules about the money they would put into emergency funds, or what we would call endowments. Jewish leaders felt strongly that the point of raising money was to serve that community, with a democratic process that would act in a smooth annual cycle. You would get a sense of public approval for what you were funding by the money that would come in. That was a democratic check. I don’t want to romanticize the federation movement, but that mode was about giving people power.

In a chapter about alternatives to the current endowment model, you write about the San Francisco federation, which asked holders of the largest endowment funds to lend money to furloughed workers at 0% interest.

That way capital circulates. We are in a time of incredible need, when people are struggling. That money is not meant just to be squirrelled away.

Another current model for change is participatory grantmaking, where philanthropists, instead of feeling like they are the deciders, they understand that their money is in part public money. They need to engage with the public they are ostensibly trying to help.

What would that look like – giving activists and potential aid recipients a seat at the table?

In a word: board reform. Not just for public charities like federations; if private foundations were serious about reforming philanthropy, they would think about changing the structures of their boards. Not just through tokenism at one or two meetings but allowing those other folks to make those funding decisions.

Your book is about politics as well as money, and you write at length about the formation of the Republican Jewish Coalition, and especially one of its founders, the Detroit oil magnate Max Fisher. Ironically Fisher was the main proponent of a nonpartisan pro-Israel politics, but he himself was perhaps the most important figure in Republican Jewish politics. What’s the connection between politics and philanthropy?

The basic question I had was, how political is American Jewish philanthropy? Notice that a lot of different Jewish philanthropic leaders are invested in saying, “We are not political,” in part because there is a legal fence around charities being involved in propaganda and political campaigning. First of all, Jewish philanthropy was always political, in terms of lobbying for tax benefits and other things beneficial to charitable groups. But the relationship between Fisher’s stature — or a Democrat like Philip Klutznick, who I also describe – in Jewish philanthropy and in various presidential  administrations is not inconsequential. They have a set of skills and networks, but also a kind of political power based on their Jewish communal power. In Max Fisher’s papers, you see him saying to Nixon, I have this whole army of Jewish philanthropy I can access, but you have to give Jews things they want – and I’ll tell you what they want because I am your liaison.

Politics also come into play in funding decisions, like the decades-long debate over whether to give to tikkun olam – universal causes – versus giving to particularistic causes. 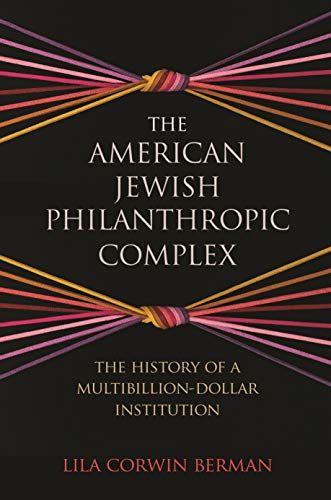 A fair number of figures that emerge in the ’90s as important Jewish philanthropists skew right of center in their politics. Why do you have Sheldon Adelson funding 40 percent of Birthright between 2007 and 2011? Where are the megadonors from the other political bent? Jews who tend to align more with liberal ideas align with a more universal ideal about how they spend their philanthropy, and therefore are not having the same kind of influence over Jewish philanthropy.

You write that the book changed in 2016, presumably after the election of Donald Trump. How so?

Two things. I started to think, oh my goodness, I’ve been doing all this research into ways that Jewish philanthropic organizations have held on to capital, and now we have a president-elect appointing people to his cabinet who openly supported white supremacist and anti-Semitic organizations. And I thought, maybe that is what this money was for! Maybe our philanthropy is the only thing we have to balance a government that aspires to authoritarianism and is deeply destructive to Jewish life, to minority life, to non-white life. I had this moment of deep particularism.

At the same time, I also felt strongly that the same rules of play that had made it seem acceptable that so much money was held by so few people, and that as a result so few people have so much power over voting districts and judicial appointments and elections – and that Jewish philanthropy was a part of that constellation that made it not only normal but for the public good — maybe those rules are what landed us here. What kind of democracy can function under these kinds of economics?