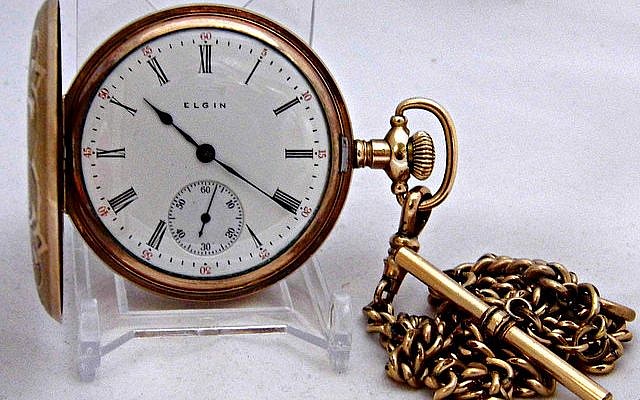 Our eldest daughter is in possession of a gold pocket watch that appears in numerous family photos of her great grandfather, my mother’s father Isadore, known to us as Pop. Our daughter never met Pop, who died more than two decades before her birth, but it seemed fitting to give her this precious gift at her bat mitzvah. She is the first child of the next generation and even at 13, she understood how special it was to have something so precious, with such a long family history.

That watch survived Pop’s 1915 journey to America, a voyage in steerage with his wife, Peshka, and their two sons, Dave and Charlie. None of us ever thought to ask how Pop had acquired such a valuable item, nor how he had managed to keep it close to him throughout his life. How he must have guarded it.  A man of a small frame, not intimidating physically, he was sharp and wily and must have figured out a way of concealing and protecting his treasure.

This was, after all, Pop, who fixed things with patents all his own. I still have pots with empty thread spools for handles, which Pop had used to replace the lost or damaged originals. The spools still work, perhaps 70 years later, and don’t even get hot. Our Newark home was filled with similar creations and concoctions.

We all have material items and trinkets that are important to us. They may not hold extrinsic value, they may be sentimental or merely old. Yet they contain stories and represent history. I often think that had Pop been able to personally hand our daughter the watch, he would have told her about its life, his wanderings. He was, after all, a storyteller. If only we had asked more questions we’d have so many more answers.

Now 79, I have accumulated several of my own souvenirs. When do I start to give them away?

I have some items that my parents never thought were valuable, not worth a nickel but parts of their story all the same. For example, there’s the silver-plated soup ladle. It was Peshka’s and she used it in High Falls, N.Y., where she ran a boarding house. One sad day the entire place burned down — there were no injuries, but all of Peshka’s supplies and personal effects were lost. All but the soup ladle. Even though it’s worthless, I treasure it and use it every Friday night to serve the chicken soup. It’s a family survivor, a part of our story. Hopefully it will go from generation to generation.

I also have a little pine curio cabinet in our den, which we use to hold books, a lamp and a landline. How my mother acquired it I don’t know, but I remember that it meant enough to her that after many years she hired a local craftsman, Mr. Rabinowitz, to refinish it. She was delighted with the project, often talking about what an artist Mr. Rabinowitz was. I look at the cabinet and I still see the skinny man hard at work, sanding, scraping, and putting a glossy (and smelly) coating of finish on top. New French provincial handles were affixed and the cabinet stayed in my parent’s home until they moved to Israel in their old age. When it didn’t make the cut, we were the beneficiaries.

One of our daughters and her husband are the proud owners of a brand-new apartment in Jerusalem. Everything is spic and span and furnished in contemporary Israeli style. But giving the room character and relevance to life as a continuum is a very old — and somewhat tattered — chair. It made its way to Jerusalem from England, where our son-in-law’s grandmother had kept it in her home since her wedding. This very chair was where the tiny, beautiful bride, known as Googi, sat for her bedeken 80 years ago before marrying a handsome Englishman.

Had Googi brought the chair with her from Vienna? Who knows. The bride died recently at age 100. What stories that chair could tell. We shall never know them all, but for our daughter’s family, that ragged chair is a treasure. Perhaps one of her daughters will sit on it for her own bedeken, just the way it is, frayed, but alive with family lore.

We throw out belongings that we can’t imagine have any emotional significance. I know Pop never thought that his soup pot handles had any value, yet when I see them, it conjures images of Pop himself. I hear him complaining, in his mixture of Yiddish and English, at how poorly the original handles had been affixed, muttering as he worked, as he built lasting clues to who he was, and, like Googi, leaving behind small items that will travel with our family through the generations.

Rosanne Skopp is a frequent blogger for The Times of Israel. She lives in West Orange, N.J., and Herzliya, Israel.