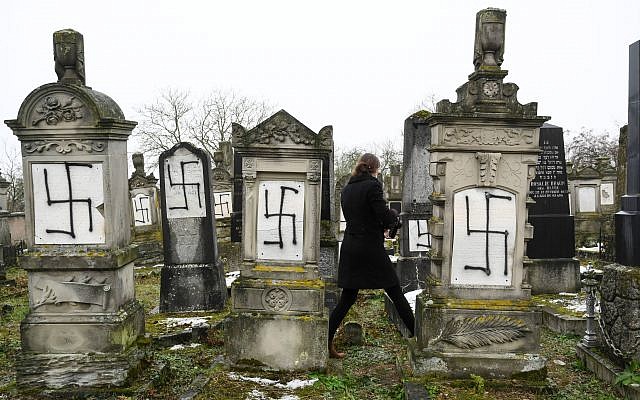 Throughout the last few years, there has been a general trend in the destruction of Jewish cemeteries. This isn’t just an American trend, it is seen all over. In places where anti-Semitic feelings are fostered, the go-to way to express these feelings seems to be the desecration of Jewish resting places. In the past year alone, we’ve seen cemeteries from Paris to Manchester to New Jersey completely dishonored. Some—like one of the Jewish cemeteries vandalized in Mysłowice, Poland—are destroyed more than once in just a few months.

In the case of the Temple Beth Shalom cemetery in New York, the vandalism was a way for a troubled teen to gain attention. The young person who committed the anti-Semitic act issued an apology and served jail time, but the attention from the media and the general public was still present. The perpetrator’s name was highlighted in articles written about the vandalism and his anti-Semitic message was conveyed, whether news sources intended this or not. Destroying and vandalizing cemeteries is a very public way to express anti-Jewish sentiments and show just how easy it can be to violate Jewish spaces. In a cemetery, vandalism is easily noticed, but it’s more than that. Perpetrators who destroy cemeteries know that cemeteries are holy places, and it is with this knowledge that someone purposefully intrudes on this holiness. In this way, the vandal is not only able to express and spread anti-Semitic feelings, but deeply affect an entire Jewish population through desecrating a sacred space. In short, this act kills two birds with one stone: it hurts the Jewish community and it’s an easy way to spread anti-Semitic rhetoric.

How to rise above it.

In Jewish tradition, those who pass live on not only in memory but also in the next generation, such as in inherited Hebrew names. While it is easier said than done, we need to try to focus on upholding traditions and passing down memories. Will it make this sort of vandalism okay? Absolutely not. And it also does not mean that Jews should hide or suppress their sorrow about cemetery vandalism. But focusing on memories can reduce the reach of an anti-Semitic vandal’s influence and renders their actions almost useless.

In addition, we must be careful when reporting on such acts of vandalism. Naming vandals in personal posts or through public media sources allow them to have their 15 minutes of fame. It spreads the message that anti-Semitic vandalism gains recognition for anti-Semitic people or organizations. This can fuel more of these kinds of attacks. That said, it is important to recognize that posting about these acts can also spread awareness and do not need to be eradicated completely, so it is a fine line. Jews and others affected are still entitled to their feelings about cemetery vandalism and do not need to entirely keep it to themselves. Media users simply need to be careful about the glory that they assign to vandals.

Though these are not perfect solutions, it is important to remember that, while anti-Semites are to be condemned and wary of, they cannot break a Jewish community through cemetery vandalism.