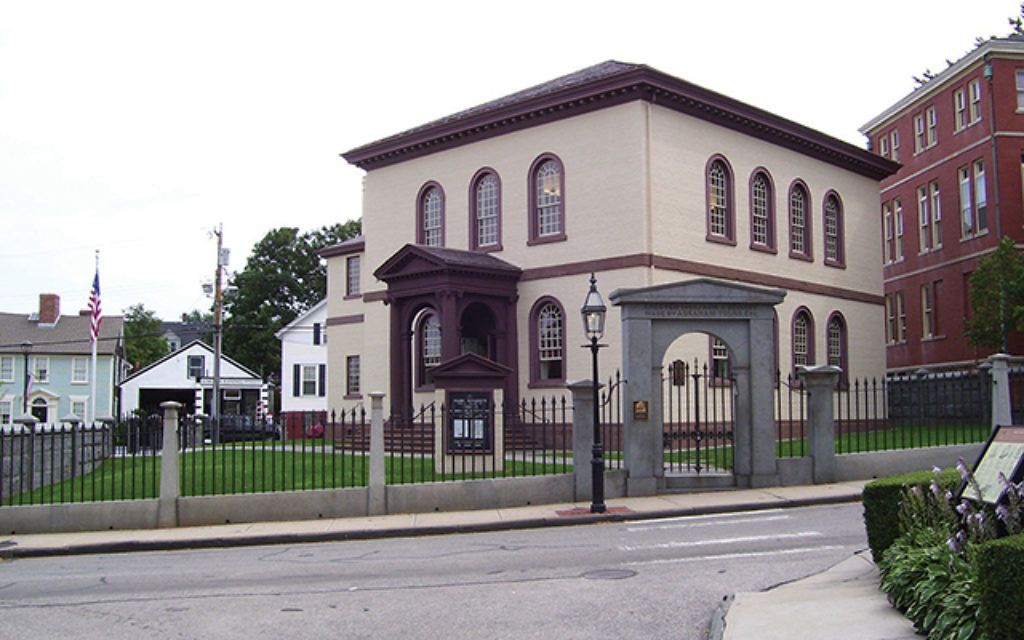 The Case For Local Control

Sitting in Newport’s Touro Synagogue has a distinctly otherworldly feeling. The nation’s oldest synagogue building, erected in 1763, is full of treasures that predate the Revolutionary War. The 12-branch candelabra and brass ner tamid are two prominent parts of that heritage, and tall candles burn on Shabbat and holidays. On Yom Kippur, the sanctuary is dark except for candles.

Surrounded by magnificent woodwork and adornments, with a cool breeze coming through open windows amidst the Orthodox davening from the synagogue’s bima in the center, it is easy to drift back in time to the 1700s. President George Washington visited this place in 1790 and on a wall elsewhere in the building is a copy of the seminal letter that he wrote to the congregation about religious and civil liberties.

This historical idyll has been disrupted in recent years by a bitter dispute between the congregation of Touro, Jeshuat Israel, and the Upper West Side synagogue, Shearith Israel (the Spanish and Portuguese Synagogue), which watched over the closed Touro building in fallow years of the 1800s. In May, a federal judge in Providence ruled in favor of Jeshuat Israel, saying Newport’s Jewish community should control the synagogue and its contents. Whatever role Shearith Israel had as trustee and overseer of the Newport building and congregation has long since expired, the judge said.

The decision was welcome news for Newport’s Jewish community and supporters of Touro. Full legal and operating control is logical for a proud and determined local group and could lead to the congregation’s revival. Still, the legal battle is not done — earlier this month, Shearith Israel, on West 70th Street, filed notice that it will appeal to the 1st U.S. Circuit Court of Appeals.

Touro is a marvel of history and architecture, and thousands tour it each year. Yet it is also a synagogue that operates like most others and has the challenges of others, primarily in getting an adequate membership to support it financially.

In recent decades, the congregation has struggled. With a stagnant local economy and also a lack of kosher food and restaurants, many Touro congregants moved or retired elsewhere. They weren’t replaced by as many younger people and a once-thriving Hebrew school closed for lack of students. Keeping up the synagogue became a strain.

But Touro has been through tough times before. In the 1800s, Jews in Newport dwindled and had to close the synagogue. They needed help to preserve it and turned to Shearith Israel; that assistance was critical in keeping the building. By the 1880s, with the flow of Eastern European Jews starting, Newport’s Jews began to increase again and the synagogue reopened.

For many years, according to most accounts, Shearith Israel’s aid has been small. Touro congregants see Shearith Israel as having no goals besides control. Provoking the current legal fight was the Touro congregation’s attempt to sell decorative Torah bells, valued at $7.4 million, to the Museum of Fine Arts in Boston, to raise money to fund an endowment for the synagogue. Shearith Israel claimed the Colonial-era rimonim belonged to it, and Jeshuat Israel couldn’t sell.

The members of the Touro congregation are the true stakeholders. They have dealt with the ups and downs of the small Jewish community. These days, it is often out-of-town visitors who make it possible to have a minyan — on a recent Shabbat, a family that had come from Oceanside by boat and a group that came from Monsey provided much of the numbers.

Yet locals, many of whose families have been connected for generations, seem intent to lift the synagogue and increase the current membership of about 125 family units. The Hebrew school has been reopened, a tot Shabbat program seems to be gaining momentum, and there are plans for more educational programs.

Touro through time has attracted many visitors from all over, including several American presidents. Emma Lazarus, best known for her poem on the Statue of Liberty, grew up in a family with a house in Newport. Her poem, “In the Jewish Synagogue at Newport,” begins:

Here, where the noises of the busy town,

The ocean’s plunge and roar can enter not,

We stand and gaze around with tearful awe,

And muse upon the consecrated spot.

While many come from far away to experience Touro, it seems right that its fate be controlled by those closest and for whom it is a beloved and essential part of life. Future success isn’t guaranteed, but with the community’s history of dedication, many great things could be ahead.

Noel Rubinton is a writer and communications consultant based in Providence, R.I.

For over 250 years, Shearith Israel, America’s first Jewish congregation, has actively ensured that Newport’s Touro Synagogue — including the precious Myer Myers Torah finials (rimonim) used there — remains vital, vibrant and intact. Congregation Jeshuat Israel (CJI), the current, temporal caretaker of the legacy of American Jewry in Newport, can’t justify its attempt to sever the sacred rimonim from their historical, ritual context in Touro Synagogue by selling them.

Since the 1650s and 1760s respectively, the Jewish communities of both New York and Newport have used rimonim to adorn their sacred Torah scrolls. Both communities understood that, according to the very religious law for which these Jews were willing to sacrifice, once these bells were placed on the Torah, they became and would remain a sacred extension of the scroll they adorned. Selling the rimonim would profane the sanctity of these ritual objects, unless the object purchased was a Torah scroll itself or unless the funds were used to ransom and thereby save a human life.

To some, such fealty to religious “technicalities” may seem antiquated — after all, why should one ritual law outweigh the demands of a budgetary bottom line? In the case of the Touro Synagogue, that hard trade-off isn’t required. CJI operates Touro Synagogue at a profit (other than for significant amounts it paid its lawyers to sue Shearith Israel). When Touro Synagogue needed repair, sufficient funds were raised by the independent, national Touro Synagogue Foundation. CJI has access to federal and state grants. The Visitor’s Center adjacent to the Synagogue provides CJI with steady annual income. “We need money” is not an excuse here, even were it a legitimate argument in theory.

Shearith Israel had been a ritual caretaker of Touro Synagogue and the rimonim for nearly 140 years before CJI came into existence. Shearith Israel financially assisted in building Touro Synagogue — the second round of financial support from Shearith Israel (in 1762) is what permitted the building to be finished. In the first part of the 18th century, when the Newport Jewish community became extinct, its remaining members turned to Shearith Israel to safeguard their legacy. As CJI’s own website admits, it was then that “[l]egal oversight of the [Touro Synagogue], its contents, and its deed was handed to Congregation Shearith Israel in New York.” Every formal agreement, lease, board resolution, organizing constitution, and contract, including with the federal government in the mid-20th century, identifies Shearith Israel as the ritual overseer of the synagogue and its ritual objects. Shearith Israel has exercised that oversight over the course of American Jewish history precisely to protect the integrity of Touro and its ritual objects, another living symbol of the history of Jews in America.

Touro Synagogue and the Myer Myers rimonim are neither “local” to Newport nor separable from each other. At Shearith Israel’s inspiration decades ago, Touro Synagogue was designated a national historic site. The Department of Interior explanatory brochure on the Synagogue as well as the National Register of Historic Places make specific reference to Myer Myers (the first Jewish member of the previously exclusionary Silversmith’s Guild) and to his “exquisite silver belltops,” noting that the rimonim “give to the synagogue a profoundly religious atmosphere.” These Torah finials are resonant symbols of American Jewish continuity, the beauty of religious tolerance, and our sacred heritage. They are a powerful legacy for every American Jew and every American.

There are already too many Jewish ritual objects in museums, the product of pogroms and persecutions. Too many of our ancestors hid or smuggled ritual objects, at great personal risk and sacrifice, to avoid abandonment, defilement, misuse. Jews, that wandering people, have precious few manifestations of continuity of use. The Myer Myers rimonim are part and parcel of Touro Synagogue and stand as palpable monuments to Jewish continuity, participation, and success in the New World. The current generation of Touro Synagogue caretakers have no right to break the chain of continuity by moving these living examples of worship to a museum.