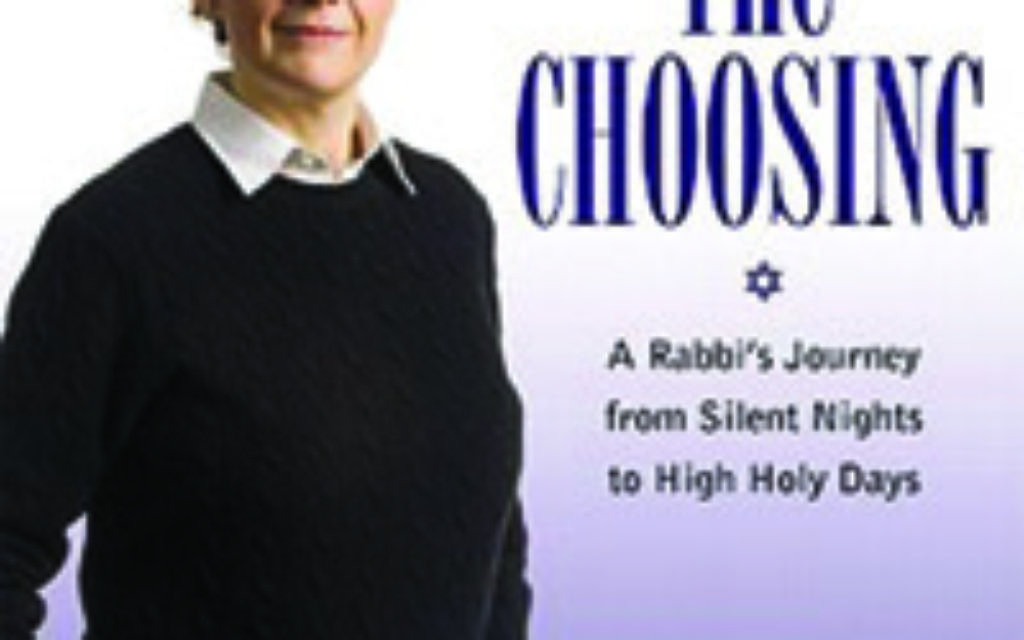 Rabbi Andrea Myers has many facets to her identity.

She is the daughter of a Sicilian Catholic mother and German Lutheran father; she came out as a lesbian while a student at Brandeis University, converted to Judaism in Israel and studied for the rabbinate in New York. Now 39 and married to a rabbi, she is rabbi and rebbetzin, a mother, teacher and writer.
“Any major life change should only make you more of who you are,” she says in an interview, noting these words have guided her own journey, and she uses them to help others.

Her new memoir, “The Choosing: A Rabbi’s Journey from Silent Nights to High Holy Days” (Rutgers University Press), is joyful, infused with a love of Judaism. Hers is a hard-won joy, she says, but it is still joy. She uses humor to underline what she cares most about.

“I am a rabbi, looking simply to do what rabbis have always done,” she writes, “to take particular, individual stories and relate them to universal themes.” In her rabbinate, she tries to draw out the stories of others’ paths — that’s where she hears “the theological ping in this world.”

Her narrative style appears casual but is well-crafted, starting with a text or anecdote, and then spinning stories that lead to other stories, and eventually circling back to where she started. She’s drawn to the cycle of the year and the ongoing possibilities of renewal: in the words of her Italian grandmother, “God closes a door and throws you out the window.”

Throughout, she refuses to shrink from life. She left her family’s Lutheran church when she had too many questions that went unanswered (and later fell in love with Judaism for its embrace of questions). As a young teen, she kept two diaries: a fake one that she filled with pictures from teen magazines and stories she overheard other girls telling, while the other diary, hidden deeper in her drawer, detailed her first crushes on female teachers and friends.

After high school, she chose to attend Brandeis, mostly to get away from Long Island, but knowing little of the school and unaware of its large Jewish presence. There, she met friends who introduced her to Jewish life, came out as a lesbian and began a long friendship with Rabbi Al Axelrad, the Hillel rabbi.

After graduating, she went to Israel to study at the co-ed Pardes yeshiva; she learned about kashrut in the kitchens of the houses she cleaned in order to cover her tuition expenses. In Jerusalem, she underwent a traditional conversion and when she returned to America after two years, she enrolled at the Academy for Jewish Religion — working her way through school as a tutor and medical technician. While attending an interfaith conference in Germany as a rabbinical student, she met the woman who is now her partner, then studying at Oxford. They had religious ceremony in New York in 2001 and a civil wedding in Canada in 2003. They now have two daughters and live in Riverdale.

In her chapter on Shavuot, “Take Two Tablets,” Rabbi Myers describes her path toward conversion. She writes of the biblical Abraham, about reading the Talmud from beginning to end in English when she first arrived in Israel before beginning her studies at Pardes, marking holidays in Jerusalem and tasting, for the first time, gefilte fish, whose “slippery coldness and fishiness” was an unpleasant surprise (she thought the fluffy white objects on the rabbi’s table were matzah balls served without soup). She also describes her visit to the mikveh for her conversion ceremony and, a week later, her bat mitzvah at Pardes, where she led services and read Torah for the first time. She touches on kashrut, denominations, theology, Jewish history, many memories, her love of Israel and her wish that “modern Israel was a place where I could live and work as a liberal lesbian rabbi and be happy and embraced, but it’s not.”

Her unforgettable parents have been remarkably supportive of her life choices, even as many of their own relatives have broken off from them because of those choices. Once Andrea converted, her mother tried her best to make her comfortable at home, including calling Chabad to help kasher the oven for Passover (her grandmother fainted when she saw the tall, bearded chasidic man in sunglasses carrying a blow torch at their door, assuming that the Angel of Death had arrived). When Rabbi Myers gave her first talk at her first student pulpit, the family showed up in their Sunday best and sat in the first row of the synagogue — her father in a shiny purple kipah left over from a bar mitzvah — and they were the only ones clapping loudly when she was done.

“They really believe in the notion that family sticks together,” she says, adding that they are right-wing Republicans. There were several points when either she or they might have walked away from their complicated relationship. “To their credit,” she says, “they wanted me in their life. That let me be who I was.”
Her Long Island accent is mixed with the cadences of her parents’ Queens and Brooklyn, and her college years near Boston — “mixing the worst of the entire East Coast,” she says.

In terms of practice and ritual, Rabbi Myers identifies with classical Reform, but when it comes to studying texts, she’s a traditionalist.

She follows her own brand of kashrut, careful that people of different backgrounds will feel comfortable in her home. Realizing the connections between politics and kashrut, “I have a real concern about supporting a system of food certification operated by those who would rather I did not exist. I have no illusions that the same people who determine whether meat is kosher would deny the legitimacy of my rabbinate and my family. But Judaism is not a democracy; at best, it’s a broken socialism. So I don’t impose my philosophy on others, much as I hope others will not impose their philosophies on me.”

The book has its roots in a High Holy Days sermon given by Rabbi Myers’ partner, Rabbi Lisa Grushcow, associate rabbi of Rodeph Sholom, in which she retold one of the author’s not-yet-written stories. A literary agent in the congregation asked Rabbi Grushcow for the source of the story — about a large rooster who escapes slaughter in Jerusalem’s Machane Yehudah market and ends up in Myers’ arms — and then encouraged Rabbi Myers to write a book.

In her first chapter on Rosh HaShanah and Yom Kippur, “Bird in Hand,” Rabbi Myers tells of the rooster, who she unexpectedly led to freedom, aboard a Jerusalem bus.

“There is no way I would be Jewish if I were not gay, if I did not understand what it means to be hated for what you are and proud at the same time, to belong to a people as old as the world and to have a community wherever you go. Coming out gave me the ability to embrace my own path and accompany others on their travels. Converting did so as well.”

She explains that there are many different ways to be a rabbi. “Rabbis are a bit like doctors. One is not for everyone, but everyone has to have someone they can go to. The people who come to me come from very different parts of the spectrum that others might not be able to reach.”

A guiding principle for her is that of Rav Kook, the first chief rabbi of Israel, who spoke of the task of modern Jews “to make the old new and the new holy,” as she says, “to breathe new life into ancient traditions, and to make sure our innovations were sacred. We are meant to keep what we have been given, and to transform it. This is what I try to do with the stories I inherit from my family, as well as those I inherit from Jewish tradition.”

Hers is a Judaism that’s embracing of all; her ideal table is crowded with people of different backgrounds; it’s loud and not always easy for all to sit down together, but worthwhile nonetheless. She would urge people to “bring all of who you are to the table” and suggests skipping the gefilte fish, although she admits that’s debatable, too.