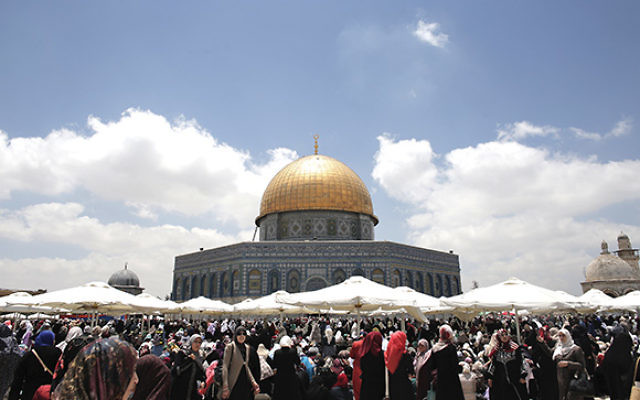 The scenes in and around Jerusalem have been tragic and chilling. A man is buried after his life is suddenly cut short by a rock attack as he drove home from a Rosh HaShanah meal. Molotov cocktails are thrown at Israeli targets. And the sacred Muslim site of the Al-Aqsa Mosque is transformed into a base for the stockpiling of weapons to attack Jews.

The international community’s comments are proving worse than useless. Much has been said about the statement by the United Nations Security Council — one that referred to the epicenter of the clashes only by its Arabic name, Haram al-Sharif, and omitting that Jews call it the Temple Mount and consider it our holiest site.

It was a statement that fanned the flames of the Palestinian accusation that Al-Aqsa, the mosque that stands on the site, is somehow in danger. It called for “upholding unchanged the historic status quo at the Haram al-Sharif” — as if Israel needs this appeal, despite the fact that this status quo is only seen as endangered because of a well-orchestrated libel.

It is difficult to grasp the power that this spurious claim — that Al-Aqsa is under some unspecified threat — has in Palestinian politics and among those who support the Palestinian cause. For Hamas, it galvanizes support and attracts money. For the Palestinian Authority, it distracts from the political troubles it faces in its heartland, the West Bank, and towards an emotive cause that unites people against Israel. For the Islamic Movement in Israel, it’s the ultimate rallying cry, as evidenced by the tens of thousands who attend its “Al-Aqsa Mosque in Danger” rally. In short, it is a myth that thrives because it offers massive political capital to anyone who utters it.

It is unfortunate that, when things escalate in Jerusalem, world leaders like UN Security Council President Vitaly I. Churkin resort to formulaic language, such as his call for “all appropriate steps to be taken to ensure that violence ceases.” Formulaic language, that is, that can be infused with a sense that it is all Israel’s fault.

The Israeli-Palestinian conflict is, in large part, a conflict of discourses — disagreement over history, over what happened in 1948, what happened in 1967, and so on. History, as taught in Israeli schools, is very different from history taught in Palestinian schools. And the international community is, understandably, reticent to embrace one discourse. But this discourse-pluralism can’t continue when it involves the spreading of panic based on some action that Israel is said to be planning for some point in the future — when Israel has actually said it isn’t planning such action.

There needs to be a point at which leaders like Churkin say: Look, we understand that it is unsettling for Palestinians that, even if Al-Aqsa is managed by an Islamic trust, it is in Israeli hands. But this doesn’t mean that Israel has plans to harm Muslim rights or worship there, and the constant claims that it does — despite its reassurances otherwise — are unhelpful and escalate tensions. Let us judge Israel based on its actions, they need to say, not accusations of planned future actions. In a similar vein, international leaders should add: Let us not feed the fantasy of some fringe Israeli activists by taking seriously their dream of a change in Israeli policy.

There is a vicious circle in play. The fixation over Israel’s imagined plans for Temple Mount is becoming more and more solid among Palestinians, and as this happens, the subject is edging its way into the international arena. And as soon as Palestinian politicians see that their myth is acquiring credibility internationally, they can’t be seen to be relaxing their efforts on this issue.

This is a particular problem when it comes to the Palestinian Authority. Supported by the West, it should feel the disapproval of its backers when it gets involved in spreading the claims about Temple Mount. Instead, it incites people to air the myth louder and louder to play to both the Palestinian public and the West. In fact, the unrest stemming from this issue seems to be the perfect backdrop for an emotive speech by Palestinian President Mahmoud Abbas when he addresses the UN later this month — leading some to speculate that he may be focusing on the issue intentionally to set the stage for his speech.

Nobody knows how to stop the Temple Mount myth among Palestinians, but it isn’t too late for the West to send out a message of zero tolerance.