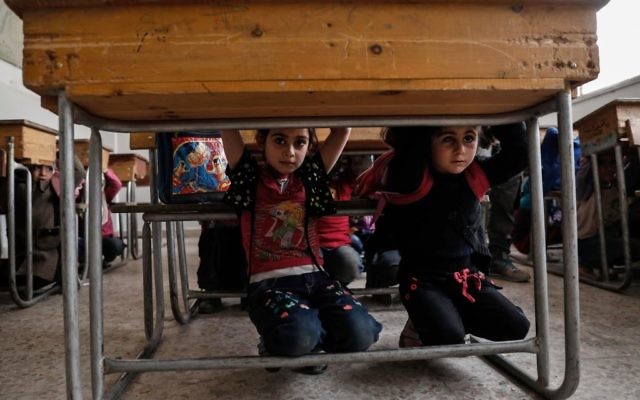 Schoolchildren learn how to protect themselves in case of a bombardment during a war safety awareness class in the rebel-held area of Harasta, on the northeastern outskirts of the capital Damascus, on May 2, 2017. Getty Images

Moti Kahana, a Jerusalem-born businessman-philanthropist who lives in Randolph, N.J., has quietly rescued members of Syria’s small Jewish community and helped preserve artifacts from the destroyed Jobar Synagogue in Damascus. But he made headlines for forming the NGO Amaliah, which rescues Syrians from the country’s ongoing civil war. The organization’s name means “God’s work” in Hebrew and Arabic.

The son of Romanian Holocaust survivors, Kahana is a self-described “start-up type of guy,” who proudly lists “college dropout” on his LinkedIn page and has founded several automotive-related businesses including an Airbnb-style platform for car rentals and sales. 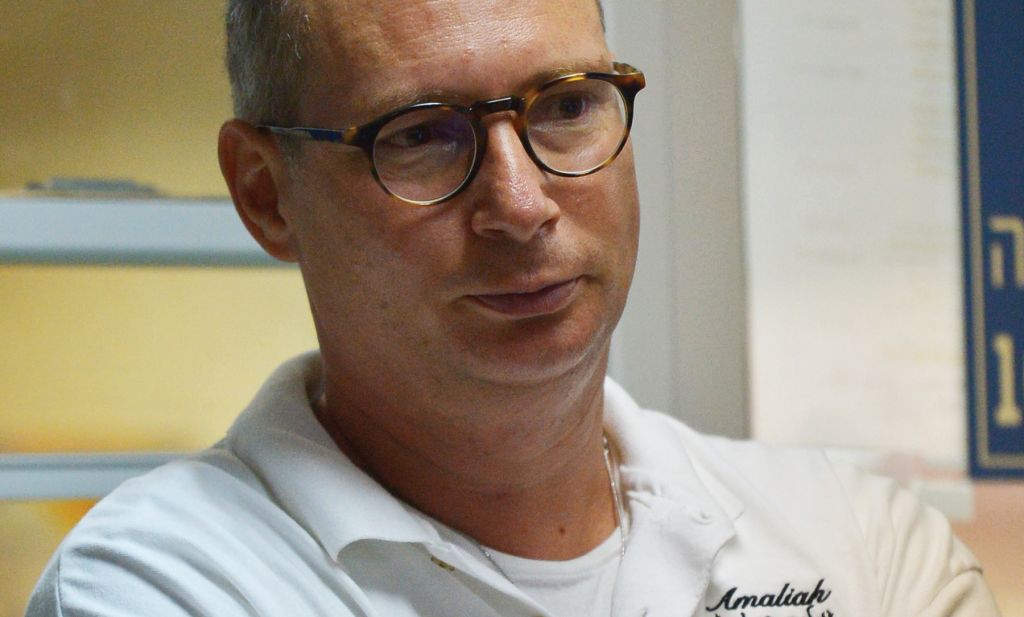 From Israel, with love: Moti Kahana offers a hand to distressed Syrians. Courtesy of Moti Kahana

He recently sold several of his businesses, including one, which is now Hertz Rent2Buy, to concentrate on his new passion: “Syria, Syria, Syria.” The 49-year-old has gone into the war-torn country more than 10 times on his Amaliah activities, which he estimates has helped save thousands of Syrians. He is also writing an autobiography, “Looking for God in Syria.” The Jewish Week spoke with Kahana by telephone last week.

You’ve spent six years and millions of your own dollars to save the lives of Arab citizens from their Syrian government. You have worked with opposition groups within Syria; lobbied the Israeli and U.S. governments for the establishment of a safe zone in southern Syria on the Israeli border; asked the Israeli government to admit Syrian refugees for treatment at Israeli hospitals; provided Syrians with SIM cards to document atrocities on their cellphones; sent a ton of kosher food for Syrians’ celebration of an Islamic holiday; collected medical equipment for a field hospital in Syria; and helped deliver nerve gas antidote to doctors in Idlib, a city in northwest Syria. Why do you do all this?

Because I’m a Jew. As a Jew, we swear “Never again” — not to Jews, and not to others as well. The Syrians are my next-door neighbors.

What are your long-term and short-term goals?

When I was trained to be an officer in the Israeli Army, my enemy was Syria. At the same time, I was trained, if you see a genocide, you stand up and help someone. Before being a soldier is being a human being.

What cooperation do you get from the Israeli government, Israeli NGOs and regular citizens?

The Israeli government, I cannot talk about. I would not recommend for Israeli NGOs to get involved in Syria, because it’s not good [politically] for the Syrian people. Many Israelis say “the people of your town should be first.” That’s a common comment — “Why are you helping the Muslims?” From the majority of Israelis, I get overwhelming support — “How can I help you?”

Has your work changed any Syrians’ opinions about Israelis and Jews?

The civilians are not my enemy. The Syrian people have been told for 60 years, “Israel is your enemy.” The Syrian people we have helped have told me, “We don’t love you yet, but we don’t hate you.” That’s a step in the right direction.

Where would the Syrians you’ve saved be without Amaliah?

In earlier years, you entered Syria for your humanitarian work. What risk do you run — especially as an Israeli, a Jew — going into Syria?

I was risking my life.

You’ve said you plan to sue Syrian President Bashar al-Assad one day for all the money you’ve spent on your rescue efforts. Do you expect to collect?

What’s next for you and Amaliah?

Next week I’m going to Israel to get a pita bread machine to take into Syria — it will feed 50,000 people during Ramadan [which begins May 26].