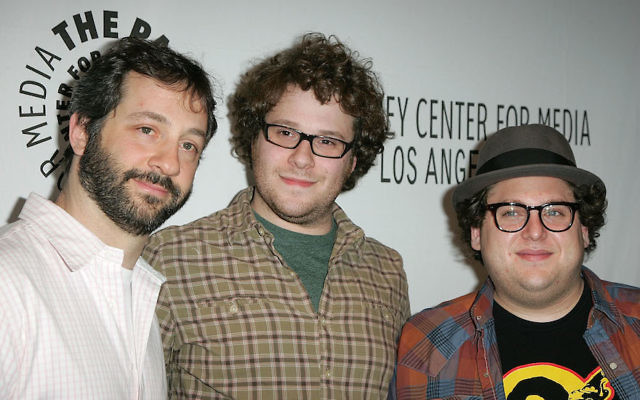 In history books, the summer of 2007 will go down as the official start of one of the worst financial crises in American history. It started in July, when Bear Stearns announced that two of its hedge funds had lost all their value — and from there, as we know, panic, chaos and lots of mortgage defaults ensued.

But to my 15-year-old self — and to thousands of other teenage boys of my generation — the summer of 2007 will be remembered for an entirely different reason: It was a season when a few funny, schlubby Jews took over the world of mainstream comedy.

First, in June, Judd Apatow’s “Knocked Up” — starring a fresh-faced 25-year-old Seth Rogen — charmed teens and critics alike with its lovable fantasy-like portrayal of romance between a laughable stoner and an ambitious TV host.

Then in August, the buddy comedy “Superbad” — written by Rogen and his friend Evan Goldberg, and co-starring Jonah Hill (née Jonah Hill Feldstein) — blew the collective teenage mind with its irreverently raunchy take on the awkwardness of high school. 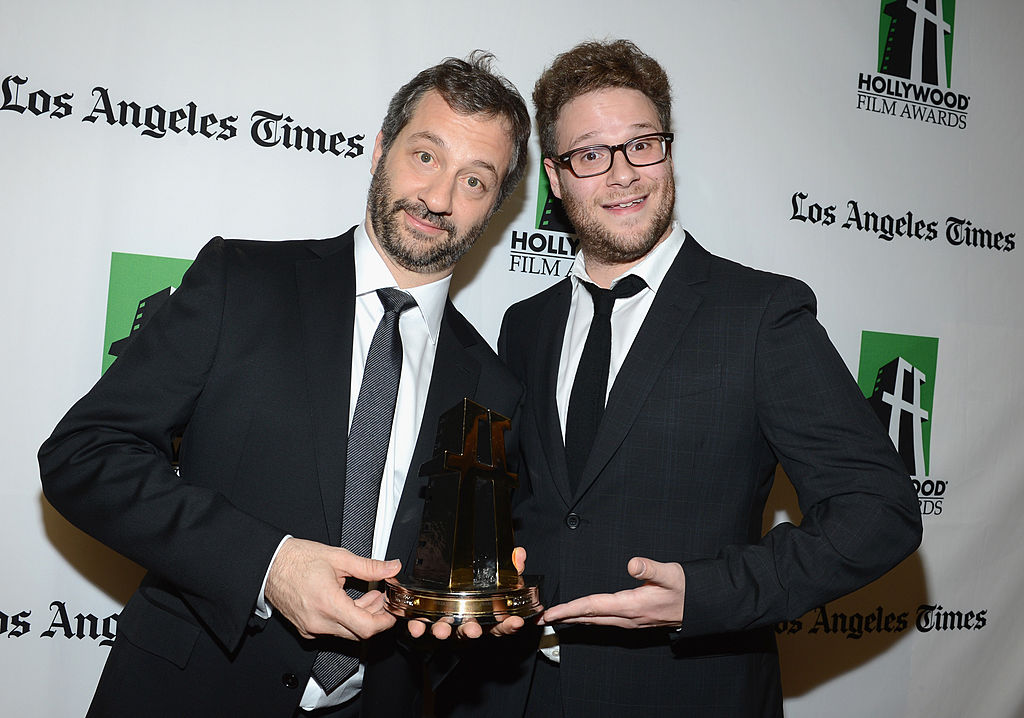 Like so many in my teenage orbit, I was an instant follower of the Apatow-Rogen-Hill religion. One of my most vivid memories from that time was seeing “Knocked Up” with a friend on its opening night. Our parents were either unavailable or uninterested in taking their offspring to a movie that promised to be full of vagina jokes, so we to had to find our way into the R-rated film on our own. (Our solution: Ask a responsible-looking man in line to act as our “chaperone.”)

The film lived up to its buzz. It was also absolutely filthy — so filthy that my friend and I left feeling as if we had truly come of age. It was like a comedic bar mitzvah of sorts.

After that, the release of “Superbad” was an event. The trailer was eagerly passed around among my friends, and we went together in one large group to see it. We were a rapt audience. In the decade since, I have never been to a movie with an audience that laughed so loudly and continuously.

That summer, it was clear that a new comic vanguard had arrived — and Apatow, Rogen and Hill were at its forefront. “Knocked Up” had a budget of about $30 million and “Superbad” around $20 million; at the box office they raked in nearly $220 million and $170 million, respectively. 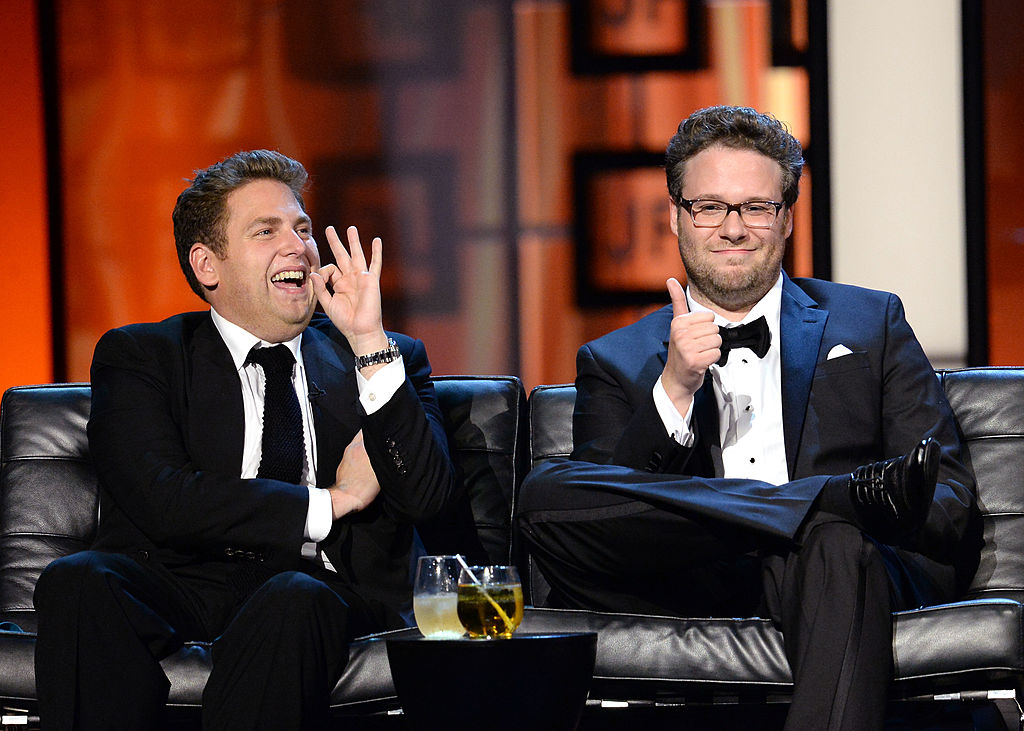 Sure, the movies were financial successes. But they also became a generation’s comedy standard that other writers, actors and comedians yearned to emulate. Just how did a standup comic from Long Island — Apatow — and two chubby guys with Jewfros manage to pull it off?

A partial answer is that by 2007, while the trio had yet to become household names, they already were industry veterans. Apatow had honed his skills as a producer and writer, having created the short-lived but beloved shows “Freaks and Geeks” and “The Ben Stiller Show.” More significantly, Apatow had already tasted mainstream success: He had directed “The 40-Year-Old Virgin” and produced “Anchorman: The Legend of Ron Burgundy.”

Hill had been introduced to the teenage world through goofy appearances in the college comedy “Accepted” and the wacky stoner charade “Grandma’s Boy.” Rogen was the least known of the three; he had appeared in Apatow’s “Freaks and Geeks” and as a supporting character in “The 40-Year-Old-Virgin.”

But the doubleheader of “Knocked Up” and “Superbad” meant that a new type of comedy had arrived — one that was brazenly crude and, laced with plenty of alcohol and marijuana, took sex jokes to realms that had never been, well, penetrated on screen. Their style was loose and comfortable, but they pushed the boundaries of what was considered acceptable dialogue and situations in an R-rated movie in wide release (see pubic salad or excrement that looks like stuffed animals). The secret ingredients in this strong cocktail? Vulnerability and fantasy. The characters in these films are flawed, relatable slackers who are honest about their faults. They nevertheless almost always get incredibly lucky with women — it’s still Hollywood, after all.

There’s a scene at the end of “Superbad” that encapsulates this perfectly. Seth (a young version of Rogen played by Hill) admits to Jules (played by Emma Stone in her debut film) that he wished that she had gotten drunk with him — since someone as good looking as she would never get with someone as schlumpy as he. Jules reassures him that this is not the case. But Seth, already inebriated, suddenly passes out and falls forward, accidentally head-butting Jules.

Even when he is given the chance he has long dreamed of, he literally falls on his face. Still, the pair end up together.

Although there was nothing incredibly Jewish about this brand — they didn’t mine deep-seated neuroses, nor did their scripts contain any intellectual content of note — Apatow, Rogen and Hill wore their Jewish identities comfortably, both on screen and off. Rogen, who attended Jewish summer camp and whose parents met on a kibbutz, donned a Hanukkah sweater in one of his recent films. Hill, who had a bar mitzvah, has commented on the Jewishness of some of his characters. (It’s also worth noting that “Knocked Up” and “Superbad” featured a few choice Jewish jokes — references to Matisyahu and Steven Spielberg’s “Munich” in the former, and a miscommunication about an “African Jew” in the latter.)

In a 2007 interview Apatow, who considers himself “nonreligious,” once called some of the actors in “Knocked Up” the “Spice Girls of Jews.”

“Seth is a Jewish guy and all his friends are Jewish, at least the ones I cast in the movie, so I thought it’d be funny that they talk about it, because it’s truthful to their experience,” he said. “I didn’t set out to make any kind of statement like ‘You can have five Jews in a movie.’ … But if they were all some other religion, I would have had them talking about that. I didn’t want to shy away from it. I thought it was fun not to shy away from it. That these young Jewish guys are proud to be Jewish and they talk about ‘Munich’ and their Jewfro-style hairstyles and that it’s all OK.”

Apatow, Rogen and Hill would go on to work together in numerous other comedies, including “Pineapple Express,” “Funny People,” “This is the End” and more, but they never quite recaptured the immature magic of “Knocked Up” or “Superbad.” To some degree, they have all taken on more “mature” projects — most notably, Hill was nominated for Academy Awards for his roles in “The Wolf of Wall Street” and “Moneyball.”

In February, “Superbad” became available to stream on Netflix — a company few had heard of back in 2007. Upon discovering this a month ago, I jumped at the chance to watch it again.

Seeing the opening credits, I was instantly transported back a decade to a sprawling suburban theater where I had laughed so hard it hurt. Sitting on my couch in Brooklyn, I almost wished that I was that hapless teen with braces and a bad haircut again.

And as I thought about how much laughter the movie brought to so many people, I realized that mixed in with the feelings of nostalgia was a tinge of Jewish pride.