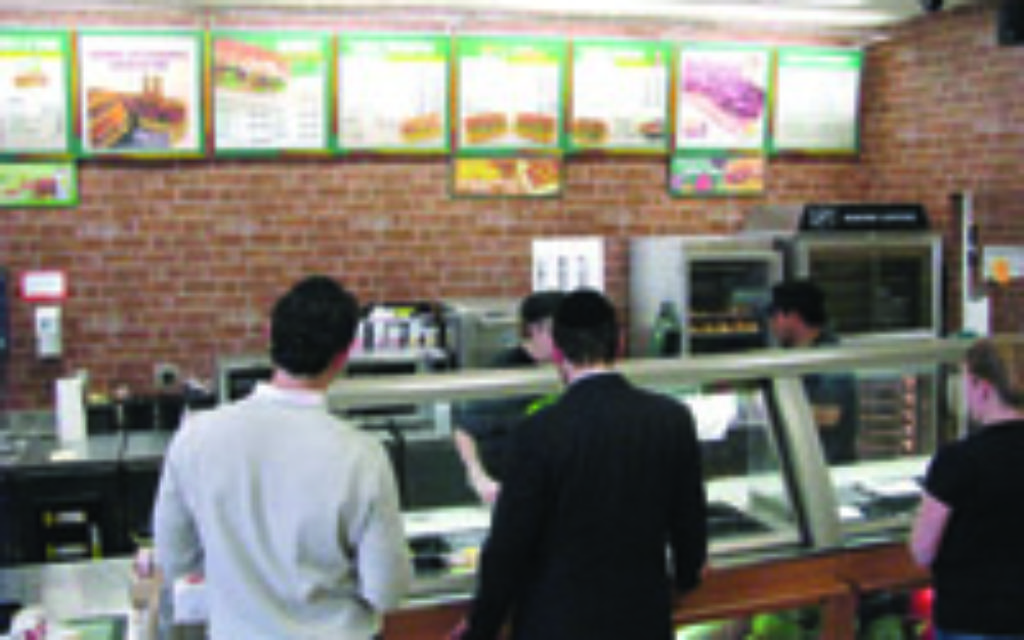 Less than 1 percent of all new Subway restaurants fail, according to statements from the popular sandwich chain. But in the New York area all five kosher Subway outposts — once described as the next big fad in kosher dining — have closed in the last few years, leading many to wonder if what was once the largest U.S. kosher restaurant chain was just a passing fad.

In 2008, a kosher Subway store opened on Water Street in Lower Manhattan. Six months later, it closed, and reopened as a non-kosher Subway. Locations in Westchester, Brooklyn, Long Island and, most recently, on Jewel Avenue in Kew Gardens Hills, Queens, suffered a similar fate. A storefront in Livingston, N.J., closed after 15 months of operation. Locations planned for the Upper West Side and Teaneck, N.J., never came to fruition. At their peak, 12 kosher Subway locations were open in the U.S.; today only five remain.

Owners at several of the closed locations said that operating a kosher establishment within the Subway parameters proved frustrating and that added expenses made it difficult to turn a profit.

Liron Shamsiav, former owner of the Queens location, said “a combination of factors” led to his store’s closing several months ago.

In addition to other fees, franchisees pay 4.5 percent of their sales to headquarters for advertising, but “you don’t get anything from it [in] the Jewish area and the Jewish crowd,” Shamsiav said, since many of the traditional promotions (like the $5 foot-long sandwich) and menu items are not available in kosher stores.

“We had to add more advertising from our own budget,” he said, which cut in to profits already weakened by the high cost of kosher meat and New York City rent. Shamsiav said that while initially Subway headquarters were more flexible and willing to aid the kosher franchisees, they became more difficult and uncompromising as time went on.

Even outside New York, Joan Fogel had great difficulties managing her kosher Subway outpost in a suburb of Kansas City, Kan., and ultimately sold it at the end of 2010, when it reopened as a non-kosher establishment.

“We were invisible to HQ,” she wrote in an e-mail to The Jewish Week. “We were never able to get Subway to do any advertising or marketing for us, even though we paid in to the fund monthly,” she said.

Fogel, who owned and managed the restaurant with her husband Roger, said that Subway did not allow them to serve any specialty items — unlike many New York stores, which offered shwarma or other dishes not found on the traditional Subway menu. They also suffered from difficulties in acquiring kosher meat, and wildly fluctuating prices for supplies.

“We had ongoing supply problems and had no purchasing power through Subway, which we were told we would have,” said Fogel. Ultimately, though their franchise was the only kosher restaurant in the area, the couple “got tired of the uphill battles and the lack of support from Subway.”
The Chicago kosher location announced on Sept. 1 that it too was closing its doors.

“Unfortunately, Walgreens bought the strip mall where we were located,” the restaurant posted on its Facebook page. “We considered moving locations, but it took us two years to find this location and we did not want to go through the process again.” The restaurant stated that a non-kosher franchise will replace it.

Though none of the New York locations remain open, along with the Chicago and Kansas City ones, the kosher Subway experiment appears to be working in some places. Locations in Cleveland, Miami, Los Angeles and two stores in Maryland have thrived in their communities.
After watching the five New York locations come and go, Dani Klein, editor and founder of YeahThatsKosher.com, has his own theory on what doomed the metro area’s restaurants.

“It’s not just one reason; I think it probably has to do with multiple factors,” said Klein, whose website compiles kosher travel information from around the globe.

“New York has a plethora of kosher options; it takes a lot to keep a kosher establishment in business,” he said, citing three main reasons for struggles of the locations there. First, a disconnect for consumers between Subway’s national advertising versus the higher prices in kosher franchises; second, the excitement wearing off after the initial thrill of being able to eat there; and third, the fact “New York Jews know deli,” and the Subway chains pale in comparison.

Klein has eaten in the former Manhattan location and the Los Angeles store, which remains open, and said he “didn’t really see the appeal to why it was so exciting … it was OK.”

Explaining why kosher Subways are difficult to maintain, owners cite the higher cost of kosher ingredients and kosher supervision, the inability to remain open on Saturdays and the alienating of some non-kosher customers who prefer the original menu and prices.

Many of the surviving kosher locations avoid unsatisfied non-kosher consumers, since they are housed in Jewish community centers. The Cleveland, Miami and Rockville, Md., franchises all opened inside existing JCCs, guaranteeing them a steady stream of kosher-observant customers and a smaller chance of irate lunchers looking for a ham and cheese sandwich.

Housed in the Mandel JCC, in the suburb of Beachwood, business is good at the Cleveland location — the first kosher Subway in the nation.
“We get a lot of traffic from both the Jewish community and also members who are here to use the gym facilities and the pool,” said Joe Faddoul, manager of the store. “We have a lot of repeat customers, a lot of people that we see on a daily basis.”

While Faddoul was “surprised to hear” that so many stores in New York had closed, he recognizes that “there is a lot more competition there as far as kosher restaurants go.” In the Cleveland community, “there is just a handful” of kosher restaurants, he said, and several have closed over the past couple years.

A representative for Subway refused to speak to The Jewish Week about anything concerning the kosher stores, citing an ongoing lawsuit that he declined to name.

Last year, Les Winograd, a spokesman for Subway, told this reporter that while many of the kosher locations have opened and closed, each one shuts down for individual reasons, without an overarching trend. In addition, he said “we try to get [the owners] to understand that you might see a huge boost in business when you open,” he said, “but once the novelty dies away things are going to level out.”