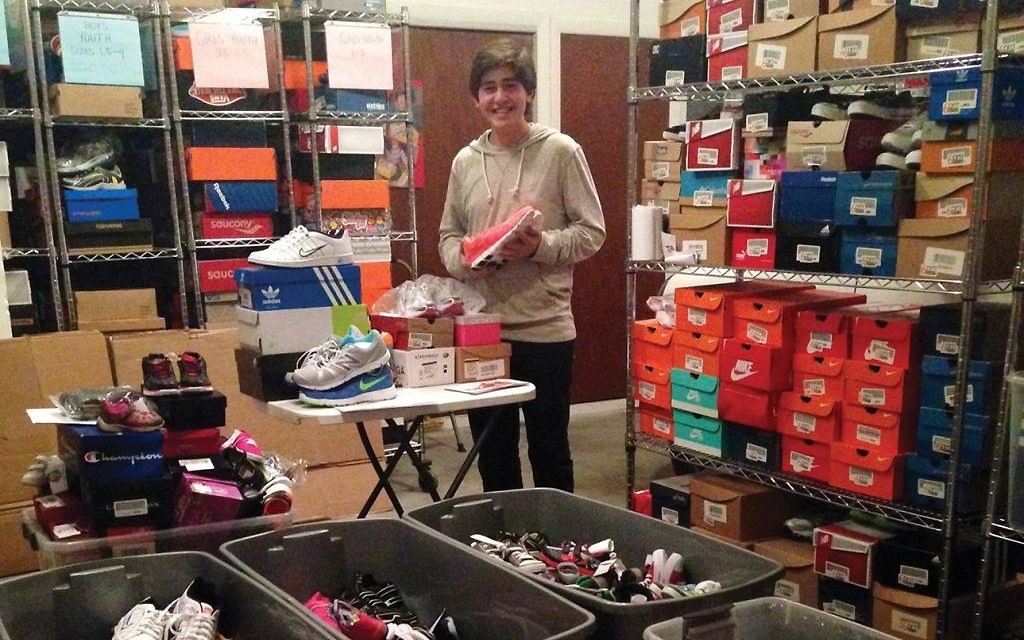 When Nicholas Lowinger was a young boy growing up in Cranston, R.I., he would tag along with his mother, an art therapist, as she gave lessons in local homeless shelters. Even as a 5-year-old, Lowinger was moved by the shelter residents, many of whom were young children who wore tattered footwear — if any at all.

Moved by the children who had become his friends, he returned shortly after to donate pairs of his own gently used shoes and sneakers. But he soon realized that the need was much greater than the few pairs he could provide.

In 2010 he launched the Gotta Have Sole Foundation as part of his mitzvah project at Temple Sinai in Cranston. He collected pairs of new footwear in bins at his temple and school, and traveled to shelters around Rhode Island to personally donate them to the residents.

Lowinger, who attended the Jewish Community Day School of Rhode Island, said growing up visiting shelters with his mother and attending a Jewish day school and temple with a strong spirit of charitable giving, imbued him with a strong desire to give back from a young age.

“The goal [of the shelter visits with his mother] was to make me appreciative of what I had, but it had a much deeper effect on me,” Lowinger told The Jewish Week. “I became friends with the children, and I saw that the kids couldn’t go to school some days, they couldn’t play sports [due to improper footwear] — and many had self-esteem issues as a result.”

But while many of his friends’ bar mitzvah projects — donating hats to cancer patients, raising money for animal shelters, and the like — ended at the end of the year, the Gotta Have Sole Foundation thrived and grew.

“I saw the fact that they had no shoes as a major injustice, and wanted it to be a lifelong project,” Lowinger said. “I didn’t want it to end after bar mitzvah.”

In the past five years, the registered nonprofit has spread from its home base in Cranston, R.I., to donate footwear to 44,680 children in 43 states. The foundation’s annual budget is approximately $85,000, not including the value of in-kind footwear that is often donated during the year. Aside from personal donations, Gotta Have Sole has received donations from such companies as Zappos, 6pm.com and Timberland.

This month Lowinger, now 17, received the Youth Award at the World of Children Awards Ceremony in New York; he was honored for his role in assisting children nationwide.

The World of Children Awards recognizes youth who are effective changemakers for children worldwide. Lowinger received the award at a dinner and ceremony last week in Manhattan.

“Our World of Children honorees see challenges in the world — in the lives of children — and they do not turn away. They face them head-on and they never waiver,” World Of Children’s co-founder, Harry Leibowitz, said in a statement to The Jewish Week. “They work for one simple reward — the smile of a child. They do amazing work every day, and our job at World of Children is to help them do that.”

Lowinger spent a whirlwind week in New York City, taking time off to ring the NASDAQ bell with the other honorees. The whole trip was a surreal experience, he said. “Being in a room full of people who share the same passion that I do about improving the lives of vulnerable children and knowing I am now a part of this family is an incredible honor,” Lowinger said of the awards. “I am even more determined to reach every homeless child in America and give them the opportunities they deserve.”

Now a senior at Wheeler School in Providence and in the thick of applying for college, Lowinger still oversees the foundation, traveling across the country to set up Gotta Have Sole Clubs in schools and recruiting volunteers to his cause. He runs the organization with the assistance of his parents and volunteers. There is no chapter in New York, but Lowinger hopes to launch one soon in the tri-state area.

An avid tennis fan, captain of his school’s debate team and self-described math geek, Lowinger is now looking for ways to make his organization sustainable for the long term. Taking inspiration from the TOMS shoes one-for-one business model — which donates a pair of shoes to children in need for every pair sold — Lowinger hopes to found a for-profit business to fund the foundation in the future.

“The idea of selling something to support the organization and the cause is really great,” he said. “I have an entrepreneurial spirit, so I’d really like to use that.”