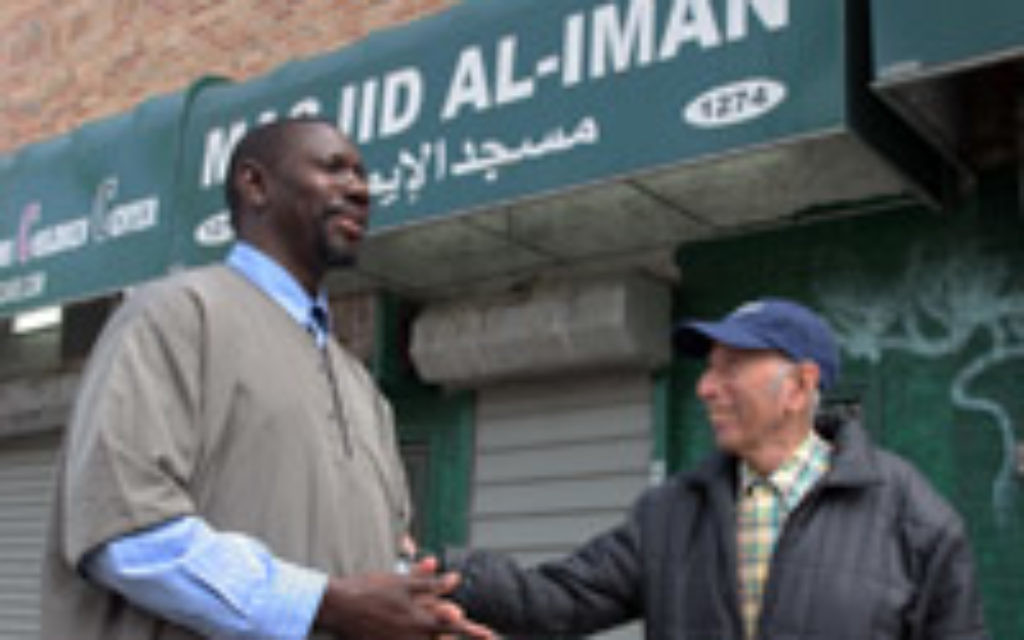 ‘This is our prayer room,” says Sheik Moussa Drammeh, as he shows visitors around his Bronx mosque, the Masjid Al-Iman, in the shadows of the Westchester Avenue elevated tracks. “And this is our youth room,” he says in a lilting African accent, as the fragrance of sweet incense wafts through the air. “And this is the synagogue.”

Synagogue? The Gambian-born sheik — dark, tall and solidly built, dressed in the long robes of Islamic clergy —opens a door and there, atop a bookcase, sits a picture of the Chabad Lubavitcher rebbe.

Chabad has become skilled at establishing shuls where others insist that no Jews exist — be it in the Congo, Vietnam or Montana, so why not on Desolation Row in the Bronx, where once there were dozens of shuls and now there are none, other than Beis Menachem of Parkchester in the Masjid Al-Iman?

David Pollock, associate executive director of the Jewish Community Relations Council was looking at some of the numbers in Community Board 9, which includes the Bronx neighborhoods of Soundview and Unionport, along with Parkchester, and says “there are 1,100 senior citizens with Jewish names. The average age of the Jewish voter was 78.1.”

Beis Menachem is a remnant of the old Young Israel of Parkchester, which sold its building nearly a decade ago, moved into a storefront, and was running on empty: No money, no rabbi, few people, no home.

One congregant, Leon Bleckman, an elderly bachelor, once an hourly worker at Bergdorf Goodman, who’d been active in synagogue life for most of his 78 years, wrote a desperate letter to “Chabad.” Just Chabad — no name — at 770 Eastern Parkway, world headquarters for Chabad-Lubavitch. That was about two years ago.

Shmuel Notik, one of the young men from “770” who each Friday fan through the city looking for Jews with whom to put on tefillin or do other mitzvot, put Parkchester on his route. He asked old men if they had put on tefillin. They asked him, “Can you stay for Shabbos? We need help with the minyan.” Without money, it was their very last Shabbos before eviction from the storefront shul.

Notik explained Parkchester to Meir Kabakow, an Israeli whom he knew from Crown Heights, and Kabakow, 26, who expects to get rabbinical ordination later this year, volunteered with his wife to spend every Shabbos in Parkchester, without salary.

Before too much longer, several young rabbinical students from Lubavitch began rising at 4:30 a.m. on Shabbos mornings and walking the roughly 15 miles from Crown Heights to Parkchester to ensure a minyan.

All the while, Sheik Drammeh “was like a brother to us,” said Bleckman. “I used to do clothing drives twice a year, and aside from the old clothing that we’d give to Jewish organizations, we gave to him, because he’d be sending clothes to Haiti, to Africa. When we gave up our storefront, we gave him our metal chairs and some tables.” And then, when the congregation was homeless, the sheik invited them in.

The Young Israel of Parkchester, founded in 1940, was in its heyday among the most vibrant, even exhilarating, lay-driven congregations in the Bronx, back when the borough had more Jews than the new State of Israel. Now, close to communal death, who remembers? Who in these Bronx streets can grasp what was once exhilarating but was now the loneliness of these elderly, isolated Jews who were conscious of having outlived their own lives?

“Unfortunately,” says the sheik, “we, all people, become so selfish, so unmindful of our neighbors, to the point where we don’t know anything about them. We rarely pay attention to who our neighbors are and what their needs are.” It was two years ago when the shul needed a home, and he gave them one.

The congregation — on a good Shabbos perhaps 20 come to daven — pays no rent. “No,” Drammeh says, “I’m paying them. I’m paying back. I am an immigrant, from Africa. I came here to New York and all the religious freedoms and acceptance, I don’t have to fight for it, the Catholic and Jewish communities already fought, and now it’s for my behalf. It would be very ungrateful if I don’t play any role, especially for the older folk, so they can benefit in turn from my being here. It is my time to say, let me [pay back] at least a little bit for the neighborhood you made and the work you have done.”
His generosity has been echoed elsewhere. He has been told of how an Orthodox shul, the Riverdale Jewish Center, a few years ago, welcomed in a Muslim girl to pray, complete with a prayer mat, during her school day when she was not allowed to pray in her public school across the street.

Yes, says the sheik, his good work needs to be visible but sometimes it was too visible. At first, “the fellows from Brooklyn” were davening near a window at the front of the mosque, and the local Muslims saw it and didn’t like what they were seeing.

“Oh,” says the sheik, “90 percent of the people that used to come here left when the Jewish people came. They thought that for a mosque to host a synagogue is anti-Islam.” Parents pulled their children out of his Islamic school, a school that first opened on morning of Sept. 11, 2001, of all mornings. “The parents said we were ‘anti-Islam.’ But that attitude is precisely the reason why we’re doing it. There are individuals and groups whose goal is to destroy other people they deem not worthy of preserving. This is anti-Islamic, anti-religion, anti-common sense.”

There can be misunderstandings. When the Jews pray, he noticed, “They usually don’t talk to anybody,” he said smiling, with admiration for their devotion. “People walk in and say Salaam Aleikem, and they would not reply,” creating an “awkward feeling.” He decided to empty out another room for the synagogue’s use, so the Jewish worshipers could have more privacy and their own entrance. His mosque and school revived.

The sheik believes that religion can inoculate the young in hard times, as it did for him as a new immigrant in the shock of New York. “I was born and raised in an orthodox religious household,” says the sheik. “My background was very strong, so no matter how deceitful New York was, my background always played a role and kept me from other things.”

He needs money to fix up the mosque, a vast and drafty 25,000 square feet over two floors, with few walls, in what used to be — and still feels like — a garage and auto repair shop. He’s been there since 2003, but it is in such raw state that the upper level of the mosque is still marked by the painted yellow lines delineating parking spaces.

The Masjid Al-Iman rents out its largest hall for local celebrations and parties, such as Beis Menachem’s recent Purim party that attracted around 100 people, says Kabakow, many from other neighborhoods.

Bleckman says, “We had such a good time. We had a Chinese theme.” Kabakow’s wife, Hana, “made Chinese food — and hamantashen and she made everything herself. She went to Queens to get decorations and Chinese hats for the guys. It was a beautiful affair. We went back for three or four portions. We had enough food for 300 people.”

Kabakow, who aside from his studies also works in a Crown Heights car rental business, says he can’t get to Parkchester during the week, “but my wife, Hana, goes every Monday to teach a class.” And together, “we make sure they have a Shabbos.” Each week he brings a Torah from Crown Heights, borrowed from a friend, Reb Avner Moshiach.

When Notik and others from Crown Heights are sleeping over, rather than walking for hours in bad weather, they sleep in one of the rooms of the Islamic School while the Kabakows are provided a room in a nearby motel, owned by a Jew, more than a mile down Westchester Avenue.
“We not only daven, we have meals, we learn Torah together,” says Kabakow of their Parkchester Shabbos. “Everyone asks good questions, their minds are sharp.” By all accounts, his wife cooks plenty of food, paid for by the Kabakows.

The congregation “doesn’t have a penny,” says Bleckman, but he allows himself to dream. “Hopefully, someday we could have a building with a dormitory that could fit about 40 students who’d want to sit and learn. They could have a study hall here. We could have a mikveh.”

The elderly Jews who never left and were scolded by their children for not leaving, now live with glimpses of the holy, with moments of grace.

After all, God never left either.