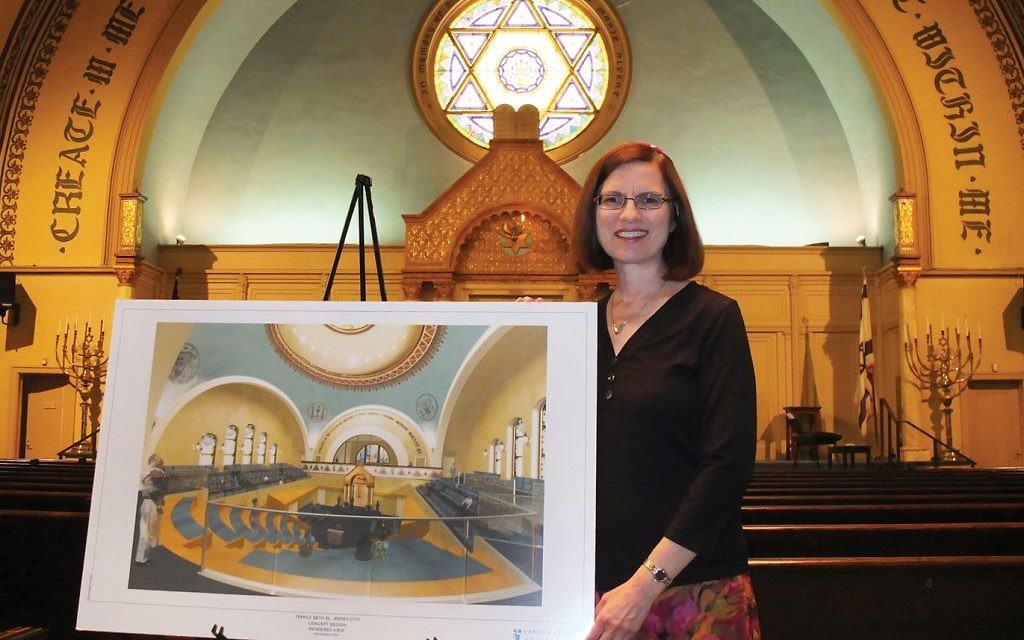 Princeton, N.J. — They are the downsizers. And perhaps the uplifters.

At a time when “starchitects” are building soaring residences in the sky, some rising to 80 or 90 stories, a small group of lower-profile architects is trying to redefine the worship experience for struggling synagogues often burdened by outdated, outsized and inefficient sanctuaries.

Their mandate: intimacy is all.

“We do more with less,” said Joshua Zinder of the firm Landau Zinder based here. “You want to inspire,” Michael Landau said of the firm’s architectural goal. “We can shape the spiritual experience.”

As Jews by the tens of thousands flock to synagogue next week for the Jewish New Year, more will be praying and singing in leaner and greener worship spaces, ones more in line with the demographic and economic realities of today’s Jewish community.

But over the years, for far too many congregants in far too many synagogues around the country, the “spiritual experience” Landau speaks of has been diluted, as members dropped away and often-cavernous sanctuaries fell into disrepair. One such synagogue is the on-the-rebound Jersey City congregation, Temple Beth-El.

At a business networking meeting here a year ago, Zinder got into a conversation with a member of the temple. Zinder learned that it, like many urban Jewish congregations, had experienced a decline in membership since its high point in the 1950s and ’60s, and “was at a turning point.” Beth-El’s 89-year-old building needed extensive repairs, it didn’t have enough money to pay for them and the synagogue officers considered selling the site and moving.

Don’t make a decision yet, Zinder told the temple member; let me come see the building and meet with the officers.

“Maybe we can help.”

The two architects are part of a firm formed just three years ago that specializes in renovating Jewish houses of worship, transforming synagogues from Bedford-Stuyvesant in Brooklyn to the Berkshires to Plano, Texas. A generation apart (Zinder is 47; Landau, 73), the two bring a similar streamlining ethic to their projects, which, like Temple Beth-El, are often small congregations with limited budgets.

One night, a week after the initial conversation, Zinder drove to Jersey City. Sitting in the Temple Beth-El balcony, a sketchpad and #2 pencil in hand, he listened to several synagogue officers and Rabbi Debra Hachen, the congregation’s spiritual leader for four years, describe the situation. Membership was down to some 180 family units, from 600 in its heyday. The sanctuary, whose 900 seats once were filled to capacity, seemed eerily empty to the several dozen worshipers who would come on a typical Shabbat. Thieves in 2011 had stolen the copper tiles from the roof, which was leaking. The shul could not afford the repairs.

Based on some preliminary sketches, on a study of the congregation’s history and its anticipated growth in the next decade, and on subsequent meetings with other Temple Beth-El members, Zinder and Landau submitted a design for the Byzantine Revival building’s renovation, repair and redesign. The plans include downsizing seating in the 11,000-square-foot sanctuary to seat a maximum of 450, replacing the fixed pews with moveable seating, building classroom space in what is now the balcony, adding a new elevator and bathrooms, renovating the social hall and other rooms in the basement, installing an air conditioning system and handicap-accessible ramps, taking advantage of natural lighting from now-blocked windows, and moving the sanctuary’s bima from the western side to the traditional, eastern side.

Temple Beth-El (betheljc.org), which put the architects’ plan to a successful membership vote, has begun a $3 million fundraising “Kadimah!” campaign for the project.

The Jersey City synagogue is typical of many urban congregations that have experienced decreases in membership and increases in operating expenses in recent decades. And Landau Zinder is part of a growing trend — architectural firms that are called upon to renovate extant synagogue buildings, rather than build new ones.

“As construction costs continue to rise, many congregations are faced with the realization that they need to be very realistic about what they can afford to build,” said Julian Preisler, a historian and author of a series of books about synagogues in the U.S. “Many congregations are closing, merging or selling large expensive buildings and building smaller, more functional synagogues. ‘Green’ technology seems to be growing. Synagogue design is now much more simple, clean and devoid of a lot of architectural embellishment. This firm seems to work well with the realities of synagogue design today.”

Like Temple Beth El in Jersey City, the 720-family Midway Jewish Center on Long Island underwent an extensive renovation that ended earlier this year. New additions included a reconfiguration of the sanctuary to make it more intimate, the addition of a handicap-accessible ramp, and the establishment of a separate space in the foyer for yahrtzeit plaques.

“It was not an expensive renovation. It was less than $1 million,” said Rabbi Raphael Rank, the congregation’s spiritual leader. The building, on the border of Syosset and Plainview, is in “a very fine location, so moving elsewhere was unnecessary, not to mention the greater cost such a move would incur,” Rabbi Rank said.

“The [renovated] sanctuary gives us an entirely new feel — greater intimacy and less hierarchy,” Rabbi Rank said. “Architecture reflects the spiritual values of a congregation. Too often in Jewish history, synagogue architecture was victim to the stricture of a repressive ecclesiastical authority. The American Jewish community is now in a position to tastefully and artistically express its deepest feelings about Judaism free of censure.”

Mark Levin of Levin/Brown, which has worked on some 150 synagogue projects in the last three decades, said that his firm’s renovation of old synagogue buildings has “marginally increased,” and that his designs reflect a congregation’s “programmatic changes in worship” and a synagogue’s “emphasis on building relationships.”

In Jersey City, Rabbi Hachen said Zinder and Landau put into physical terms the spiritual needs of her congregation, showing that it makes more economic sense to upgrade the extant building than to build a new one a few miles away.

Having to move, Zinder said, is the situation that many aging synagogues have faced in the last half-century, since many Jews in this country moved to the suburbs from the inner city.

“Often the spiritual value of the built temple space has deteriorated over time,” Landau said. “We seek to restore that value.”

Other local synagogues whose redesign the firm is coordinating include Temple Tikvah, in New Hyde Park, L.I.; and B’nai Adath Kol Beth Yisrael in Bedford-Stuyvesant.

The handful of congregations with which Landau Zinder is now working — and the several dozen congrgations of all denominations for which the partners have drawn up similar renovation plans — show that renovations on old buildings can trump construction of new ones, Zinder said. “A synagogue that wants to make significant changes can achieve this.”

Landau Zinder is among a handful of architectural firms in the United States whose full-time or part-time expertise is synagogues. All, Zinder and Landau said, deal with contemporary preferences and economic realities and evolving aesthetic preferences. Young Jews, whether in the city or suburb, favor less-conspicuous synagogue buildings than their parents and grandparents built. Small is the new big. They “don’t want to be seen from the street,” Zinder said. Young Jews, in either location, want synagogues that can serve as multi-purpose educational-and-social centers. And the synagogues of young Jews usually have limited financial resources.

“Young people don’t want their parents’ synagogue,” said Zinder, who was named Architect of the Year by the New Jersey Society of Architects last year.

“We have to design something that is economical,” Landau said. His goal: “Something that has a spiritual value, but has the ability to accommodate secular activities.”

The partners, who share a longstanding interest in designing synagogues, met at the Princeton Jewish Center, where they served on the congregation’s building committee. “I’ve seen the [building] process from the other side,” Zinder said.

Zinder and Landau “clearly use a postmodern approach with regard to design,” Preisler told The Jewish Week in an email interview. “Many synagogue architects use elements from Eastern European wooden synagogues as well as incorporate elements evoking a modern Israeli style — large stone blocks, rows of upper windows. This firm seems to like a lot of natural light and worship spaces that can be multi-purpose.”

The Landau Zinder firm typically designs every facet of its synagogue projects, including a sanctuary’s bima table and Ner Tamid light. Said Landau: “It’s my contribution to Judaism.”

Now, most of the city’s synagogues have closed; only four remain.

In recent years, several young Jewish families have settled in Jersey City, attracted by its low housing costs, good public school system and convenient commute to jobs in New York City, the rabbi said. An increase in the synagogue’s membership to 250 family units in the next few years is realistic, she said. “It’s a growing urban area.”

The new members of Temple Beth-El include large numbers of attorneys, teachers and people in the real estate industry; there are few very wealthy people among them, Rabbi Hachen said.

So the congregation has instituted a “phased-in” five-year fundraising campaign, and established a non-profit corporation, The Friends of Temple Beth-El Jersey City.

Renovations will probably start sometime in 2016.

An architectural firm makes more money from constructing a new building than renovating an old one, Zinder said. But the spiritual needs of a site like Temple Beth-El — “It has a sense of history” — outweigh the bottom line, he said.

Zinder said he and Landau have no regrets about advising a congregation to renovate rather than rebuild. “For us it’s the right thing.”