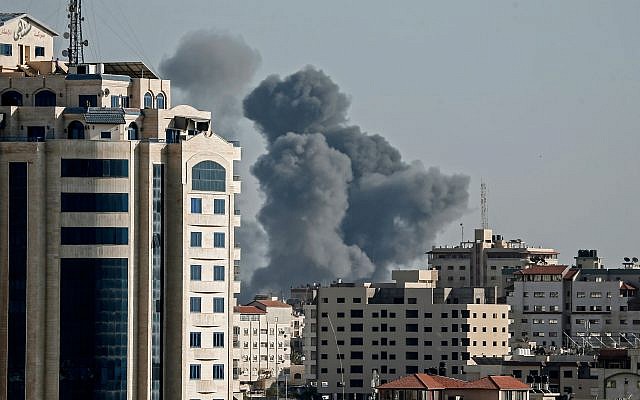 Smoke billows above buildings during an Israeli airstike on Gaza City on May 4, 2019. MAHMUD HAMS/AFP/Getty Images

The deadliest rocket attack on the State of Israel since the 2014 Operation Protective Edge was orchestrated by Hamas and the Palestinian Islamic Jihad (PIJ) on Saturday, May 4 and ended Monday morning, May 6, in a ceasefire. In those two days, Hamas fired over 700 rockets at southern Israel, 240 of which were intercepted by the iron dome.

The attack killed four Israelis in the span of 24 hours, marking the first time an Israeli has been killed in a rocket attack since 2014. On that Saturday night, a rocket landed in Ashkelon and hit Moshe Agadi’s home, killing the father of four. The following afternoon, Moshe Feder died when a missile struck his car near the Gaza border. Another rocket then struck Ashkelon, killing Israeli Bedouin Ziad Al-Hamamda. On Sunday evening, 21-year-old Pinchas Menachem Prezuazman, an Israeli-American, succumbed to shrapnel injuries he sustained while running to shelter in Ashdod.

Twenty-five Palestinians were killed during these two days. PIJ admitted to accidentally killing two of the 25 Palestinians, a 14-month old baby and a pregnant woman, the deaths of which the Gazan Ministry of Health initially held Israel responsible for. One of PIJ’s rockets malfunctioned and exploded inside the baby’s home, killing her and a pregnant relative who was also in the home. PIJ’s representatives met with the baby’s family to offer compensation, including labeling the baby a martyr.

On Sunday, May 5, Hamas and the PIJ both threatened to extend the rockets’ range to 40 kilometers and to hit Tel Aviv. Israel’s Home Front Command reacted by encouraging residents of cities within 40 km of Gaza to remain in protected areas. The Home Front Command limited public gatherings to 300 people under the condition that they met indoors, banned agriculture work and cancelled school in the south. Beersheva, Netanya, Rishon Lezion and other cities opened public shelters. On Monday morning, May 6, the Home Front Command permitted southern residents to resume to their usual routine.

Although Gaza and Israel reached a ceasefire Monday morning, few suspect it will last. Hamas said that “Our message was delivered in this round and we are ready for the next confrontation.” Hamas is promising that unless Israel honors their terms of a previous ceasefire, they will strike again and once again violate the ceasefire.

The rocket attacks not only affected Israel and Gaza, but also created tension in American politics. Minnesota’s House Representative, Ilhan Omar, posted a tweet that engendered a lot of controversy. She tweeted:

How many more protesters must be shot, rockets must be fired, and little kids must be killed until the endless cycle of violence ends?

The status quo of occupation and humanitarian crisis in Gaza is unsustainable. Only real justice can bring about security and lasting peace.

Former US ambassador to the UN Nikki Haley replied, “Agreed @IlhanMN so what should be done about Hamas? They are the ones behind all of this.”

It’s deeply troubling that we’ve reached the point where no one is shocked when sitting members of congress, like @IlhanMN & @RashidaTlaib, side with Hamas terrorists over Israel. By remaining silent, democrat leadership & presidential candidates are endorsing this insanity. https://t.co/A8STX8WqLf

On her own twitter, Nikki Haley called on all politicians and presidential candidates to respond to Hamas and PIJ’s violent rocket attack against Israel. She tweeted:

Imagine if 600 rockets had been fired into the US or any other country besides Israel. What country would not defend itself? Every Presidential candidate needs to weigh in on their thoughts on this attack. Go ahead….we’ll wait. ????????