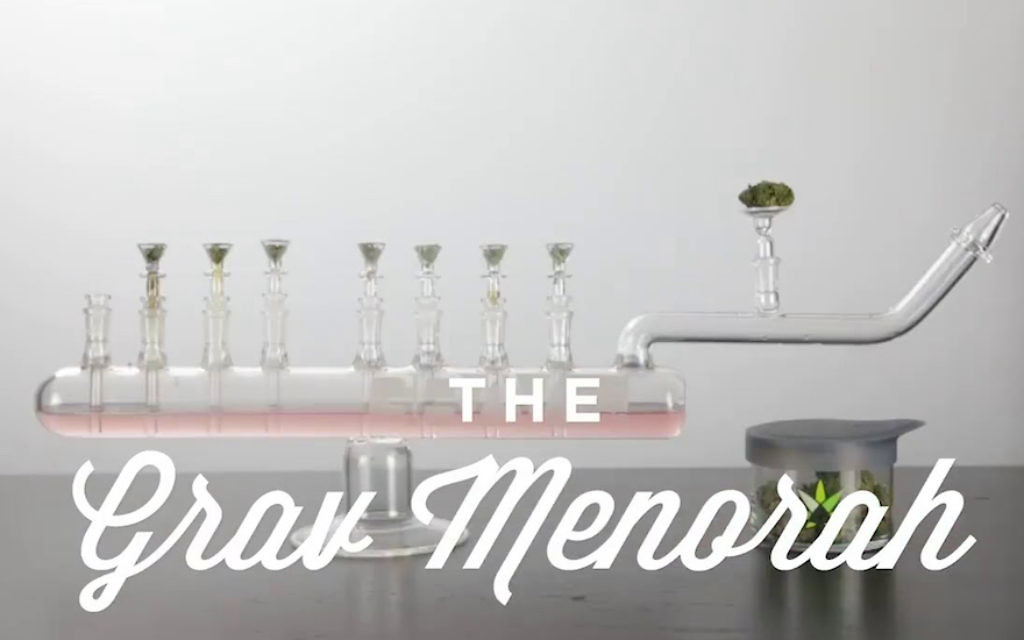 The menorah bong is having a moment.

By now, you may have seen the year-old YouTube video of a bearded guy in a blazer lighting all eight bowls of the Grav Menorah — a cross between a glass bong and a traditional hanukiah — and taking one massive toke.

But the religiously inspired cannabis consumption device, which retails for, yes, $699 at 420Science.com, was not originally intended for sale. In fact, David Daily, the 35-year-old glass blower and businessman behindGrav Labs — the scientific glass company he founded a decade ago in Austin, Texas — made the menorah bong a few years back for the sole enjoyment of his family.

“We like to partake in the holidays, and I thought it would be a really cool actual menorah,” said Daily, who grew up in a Conservative Jewish family in Houston.

Daily’s friends over at the online headshop 420Science knew of his creation, Daily explained, and last year their YouTube channel, the 420ScienceClub, decided to promote his device with a video demonstration. It wasn’t long before the menorah bong went viral.

Already this Hanukkah season – the video has clocked thousands more hits in recent weeks – Daily has sold seven of his made-to-order pieces. For the moment he has capped production.

As marijuana enters the cultural mainstream, an increasing number of Jewish tokers are infusing their traditional holiday rituals with a dose of the cannabis plant. Last Passover, the Jewish pot legalization groupLeOr hosted the country’s first official Cannabis Seder in Portland, Ore. (a state where weed is now legal for both medical and recreational use). And even the High Holidays have gotten a nod, albeit on a less grand scale.

Hanukkah, too, has raised its pop culture profile in recent years. What was once seen as the lesser alternative to Christmas now has its own crop of ugly sweaters – including one recently pulled from Nordstrom’s shelvesfollowing complaints on social media that its slogans, “Hanukkah J.A.P.” and “Chai Maintenance,” perpetuated stereotypes of Jewish women.

Hanukkah also now has its own kitschy anthem. Adam Sandler recently updated his classic, “The Chanukah Song, ” for the fourth time (the first time since 2002). In addition to refreshing the list of Jewish celebrities, he tweaked the last stanza to reflect the current state of affairs. The Jewish comedian — who first coined the term “marijuanakkah” — closes his latest version with an invitation to “smoke your medical marijuanakkah.”

After all, in 2015, not only can you legally smoke your medical marijuanakkah in nearly half of U.S. states, you can now inhale it with the help of a rabbi.

Philadelphia-based pipe maker Jeremy Grant-Levine, aka Germ, makes a series of unique glass pieces based on Orthodox rabbi characters. His first in the series, “Rabbi Dabinowitz” — a pipe that depicts a black hat rabbi holding a removable Torah scroll and pointer, and whose name is a play on the concentrated cannabis extracts known as “dabs” — sold “for a couple grand,” according to the artist.

It’s not his first foray into creating Judaica-themed pipes. A few years back he made a line of glass shofar one-hitters — and the orders kept coming.

“I had a store in New Rochelle [New York] that would kill it around the High Holidays,” he said by way of explanation.

The rabbi pipes started out as something of a joke, Grant-Levine said, “after working in Jewish non-profits for a while, and realizing how many Jews smoke weed.”

While Grant-Levine, 33, now earns his living making pipes (pieces start at $1,500), and teaches glass-blowing workshops from Oakland to Seattle, he initially subsidized his passion by teaching Hebrew school and leadingBirthright Israel trips.

And while menorah bongs and rabbi pipes might ruffle a few feathers in some corners of the Jewish world, at least one Orthodox rabbi is unfazed.

“People have been mixing religious metaphors for quite some time, and there is nothing that we purists can do about it,” said Yitzchok Adlerstein, an Orthodox rabbi who teaches Jewish law and ethics at Loyola Law School in Los Angeles. “It’s certainly not as offensive as the Hanukkah bush.”

“And,” he added, “can we keep in mind that the stuff is legal in a few states?”