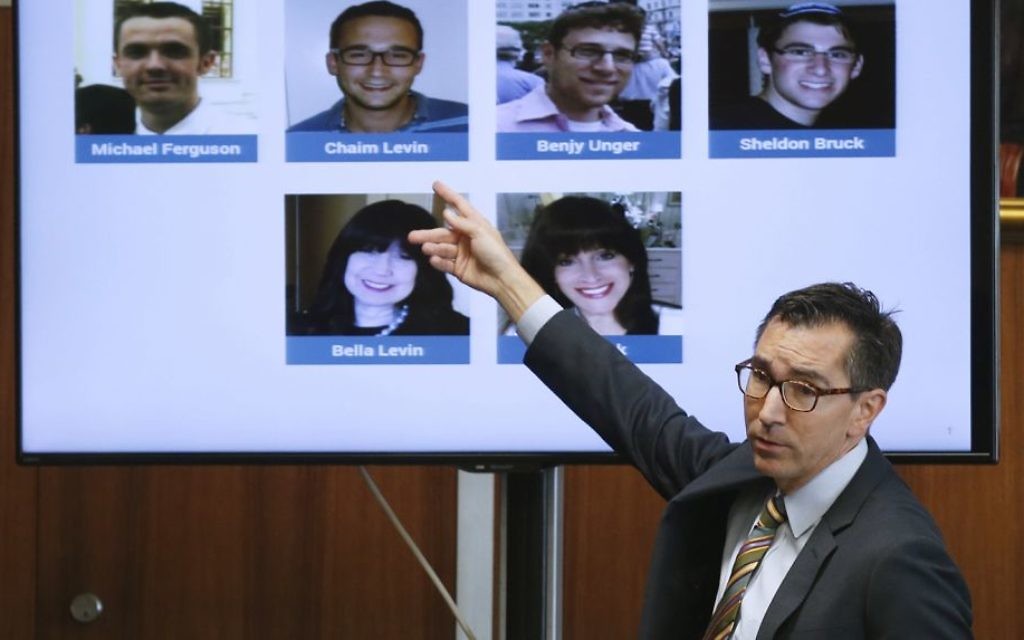 On a warm day in June, a Jersey City jury heard Jonathan Hoffman, an Orthodox Jew, describe an exhilarating weekend he spent sponsored by JONAH, an organization that claims to “heal” same sex attraction.

He described a “wild party” where a group of men danced naked in the woods, threw cake at each other and rolled in the mud before washing off in a group shower. Hoffman told the court that JONAH (Jews Offering New Alternatives for Healing) had helped him in his effort to change his sexual orientation.

Hoffman was deemed as a “success story” by JONAH — someone with a history of sexual relations with other men who has married a woman and started a family. In a videotaped deposition played for the court, Hoffman credited JONAH’s program as “the stuff that has helped me and the stuff that I hold dear to my heart.”

But others claim they were harmed by the organization. Last week, in a landmark verdict, a jury agreed. The five plaintiffs alleged that JONAH defrauded them by saying the program’s methods were scientific. The jury found JONAH liable for $72,400 in damages for consumer fraud and “unconscionable business practices.”

The verdict, however, leaves the Orthodox community with more questions than answers. Like how a young Orthodox Jewish man struggling with homosexual desires was guided by well known rabbis to spend weekends in the woods like the one Hoffman described? All under the watchful eye of a self-styled “life coach” who is also a Mormon high priest.

Much of the answer lies in the brilliant salesmanship of JONAH’s director, convicted fraudster Arthur Goldberg, and his less colorful co-director Elaine Berk. But it also includes the fact that recommendations of JONAH came from a number of respected Orthodox rabbis and mental health professionals.

In the late 1990s, Berk’s son came out to her as gay, she testified. She was troubled by this and “wrote letters to rabbis and different Jewish organizations and didn't receive answers.” Frustrated, she did her own research and found psychologists positing there were ways to “heal” homosexuality.

She met Goldberg, whose son had come out to him as gay, at a conference about homosexuality and healing in 1997. The next year they founded JONAH.

Described by Goldberg and Berk as a referral service, JONAH espouses treatment that includes one-on-one counseling, group therapy, and weekends in the woods. JONAH asserts that “wounds” incurred in childhood cause homosexuality, and once those wounds are “healed,” men will have healthy, non-sexual relationships with other men and become straight.

In 2000, JONAH received an endorsement from Rabbi Shmuel Kamenetsky, dean of the Talmudical Yeshiva of Philadelphia and a member of Agudath Israel’s Council of Torah Sages. The endorsement remains on JONAH’s website today.

Around the same time, the award-winning documentary “Trembling Before God,” depicting the struggle of Orthodox gays and lesbians for acceptance in their religious communities, was released. Suddenly, gay Orthodox Jews became visible — and vocal — in a way they never had before.

Jonathan Hoffman noted that he found JONAH in 2006 through an online comment critiquing the film. He was 19 and struggling with “behaviors that were homosexual, not in line with my values,” he said.

“There weren't any other resources in the Jewish community that [were] providing Jewish men with the help that I was looking for,” Hoffman said in his deposition.

Moishie Rabinowitz, now treasurer of Jewish Queer Youth, was referred to JONAH by Rabbi Yaakov Perlow, known as the Novominsker Rebbe. Raised in a charedi home, Rabinowitz, 22, was well into the process of shidduch dating. The only problem: he knew he was gay. At the time, “there was no gay Jewish world,” he told The Jewish Week.

“I called his office … and said this is a life or death situation, I need to see the rebbe tomorrow.” The next morning at 9:30, Rabinowitz walked into Perlow’s Brooklyn office. The white-bearded Rebbe emerged from his office donning tallit and a tefillin.

After their meeting, Rabbi Perlow promised to look into the matter and four days later referred Rabinowitz to JONAH. But knowing that the organization used unscientific methods of conversion therapy, he decided not to go.

In 2004, the Rabbinical Council of America (RCA), the largest Orthodox rabbinic association, issued an endorsement of JONAH, suggesting “rabbis might refer congregants to them for reparative therapy.”

But the biggest endorsement for JONAH came with “The Torah Declaration” in 2011, signed by over 200 rabbis. The document, apparently drafted by about two dozen men, attributed homosexuality to “childhood emotional wounds” and declared that attempting change was the only Torah-consistent way to deal with the problem.

And JONAH was the only Jewish organization offering the possibility of such change.

Just when JONAH had reached the height of rabbinic backing, it came under attack. In November 2012, four former clients and two mothers filed a fraud suit.

In court papers and later at trial, witnesses said that Alan Downing, JONAH’s Mormon “life coach” who claimed to have subdued his own homosexual attractions, routinely “invited” young men he was counseling to strip in his office and then “physically feel” their masculinity. Downing also led others to believe the behaviors of their parents had turned them gay.

Immediately after the complaint became public, the RCA rescinded its support and asked JONAH to remove the endorsement from its website, where it remains today.

Last week’s verdict against JONAH did not come as a surprise to Rabbi Samuel Rosenberg, the Orthodox rabbi and licensed clinical social worker who was co-director of JONAH from 1999 until around 2002, when he left due to “theological and professional differences,” particularly regarding the weekend retreats’ nudity and cuddling.

“I would not approve the methods,” Rosenberg told The Jewish Week.

Rabbi Rosenberg and Goldberg clashed over the boldness of Goldberg’s claims.

“Mr. Goldberg insisted that he wanted to publicize the claim that he can assure anyone who comes through his doors that he can ‘cure’ them, quote unquote,” Rosenberg said. “My position was that it’s totally unethical to guarantee it, as with any psychotherapy. And also, that the term ‘cure’ is totally inappropriate in this context, because I would not call it an illness.”

Goldberg and his attorney did not respond to multiple requests for comment.

Rabbi Rosenberg said he was also troubled by Goldberg’s efforts to marshal Orthodox rabbinic support for JONAH through adopting calculated, Torah-friendly language while concealing the fact that he is not personally Orthodox.

Despite Goldberg’s lack of formal Jewish education — he left yeshiva after grammar school — and his personal non-observance, he was instrumental in the formation of right-wing Orthodoxy’s approach toward gay Jews. It was Goldberg’s name that was on the 2011 article in the Orthodox journal “Hakirah,” featuring a discussion between Rabbi Kamenetsky and him about the necessity of “setting forth Torah values” and touting JONAH’s services.

Within months, language from that article appeared in the Torah Declaration.

Some rabbis have successfully had their signatures removed from the document, like Rabbi Dr. Martin Schloss, director of the Jewish Education Project’s day school division. Others have hit a brick wall.

Rabbi Simcha Feuerman, a licensed clinical social worker and president of Nefesh, the International Network of Orthodox Mental Health Professionals, said he initially signed the declaration because he thought it “was merely a stance on the idea that sexual orientation is not absolute” and that some motivated clients could “find a healthy way to manage heterosexual relationships.” However, he later took issue with the document’s “unequivocal language that all homosexuals can be treated with today's available clinical expertise.” Despite asking to be removed several times, he said, his name remains on the website.

According to plaintiff Chaim Levin, however, even Rabbi Kamenetsky has privately expressed doubts about the Torah Declaration.

Levin said he met the rabbi two years ago and “saw the pain in his eyes as I recounted my experiences in conversion therapy and JONAH. He asked me for forgiveness and said that the document ‘needs to be changed.’ To date, nothing has, and Rabbi Kamenetsky has remained silent.”

Although JONAH’s bizarre methods were exposed over the course of the trial, some Orthodox rabbis stand by it.

Asked about the recent verdict, Rabbi Shmuel Fuerst, a signatory to the Torah Declaration, said he wasn’t aware of it but was content to have his name on the document.

Rabbi Steven Pruzansky, an Orthodox rabbi in Teaneck who has been outspoken in support of the Torah Declaration, described the verdict against JONAH as imposing "draconian limitations on the pursuit of self-help."

While admitting that JONAH's techniques are sometimes "harsh,” Rabbi Pruzansky defended them as necessary "behavioral tools to sublimate the desires and lead a heterosexual life."

But the details that emerged shocked others.

“Although there are reputable therapists who use and have had successes with conventional counseling methods to help people wishing to control their same-sex attraction,” said Rabbi Avi Shafran, director of public affairs for Agudath Israel of America, “the sort of ‘therapy’ that Mr. Downing says he employed is utterly outrageous and would never be sanctioned by any reputable Orthodox rabbi.”