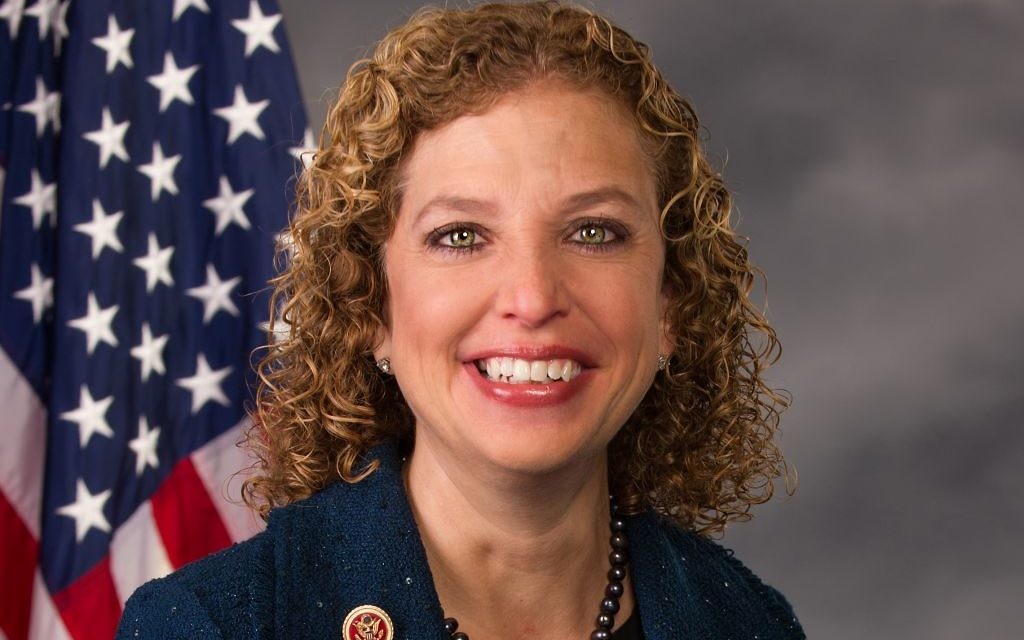 Philadelphia — When Debbie Wasserman Schultz spoke Monday morning to the Florida delegation as the national Democratic convention got underway, some delegates cheered.

The chaos at the Marriott Hotel here demonstrated the degree to which the Florida congresswoman, perhaps the party’s most prominent Jewish leader, had become a divisive figure since she emerged a decade ago as the tyro no one in the party could praise enough.

Wasserman Schultz, 49, was forced over the weekend to step down as the chairwoman of the Democratic National Committee, a post she has held since 2011, after leaked e-mails revealed that she and other DNC insiders had little love lost for Clinton’s primary campaign challenger, Sen. Bernie Sanders.

Wasserman Schultz appeared game at the breakfast. “We know that the voices in this room that are standing up and being disruptive, the Florida we know is united” in backing Clinton, she said over cries of “Shame!”

It couldn’t have been easy for Wasserman Schultz: The political leader most out front with her Jewishness must now contend with the fact that the most significant setback in her career came in part because an aide had questioned whether Sanders, the first Jewish candidate to win major nominating contests, was Jewish enough.

During her rise, Wasserman Schultz has made her Jewish identity abundantly clear. A typical refrain was that she considered her policies not merely as a lawmaker but as a “Jewish mother.” She took time out to attend Jewish events, appearing in 2011 at a roast for Ira Forman, who had retired as the director of the National Jewish Democratic Council — where she had one of her first political jobs in the early 1990s as a gofer.

At the 2012 convention in Charlotte, N.C., she worked tirelessly to push back against the inroads that Republicans were making among Florida Jews. It paid off: Gains showing up in internal polls were rolled back, helping Obama win the key state.

Still, for Democrats, and Jewish Democrats particularly, she could do little wrong. Wasserman Schultz hid her battle with breast cancer until 2009, when she spoke about it with eloquence and force. She said the health plan she had as a member of Congress was critical to her care — and one she wanted to extend to all Americans through the Affordable Care Act.

In 2011, when her close friend Rep. Gabrielle Giffords, a Jewish Democrat from Arizona, was shot, she joined with New York Sen. Kirsten Gillibrand in maintaining a bedside vigil.

Soon thereafter, Wasserman Schultz achieved a new pinnacle, chairing the DNC. She brought to the job her prodigious fundraising skills and what had been a talent for balancing effective attacks against Republicans with a sympathetic (to her allies, anyway) presence.

Turns out, maintaining that balance was harder than it seemed. Republicans pounced and Democrats and feminists winced in 2014 when she likened Wisconsin Gov. Scott Walker to a wife beater while criticizing his policies. She later said she regretted the analogy.

Her fundraising lagged. This election cycle, the DNC has raised just short of $130 million to the Republican National Committee’s $180 million, according to Open Secrets.

These pressures mounted as differences between Obama and the pro-Israel community sharpened. During the debate over the Iran nuclear deal, she became one of the most-watched Democrats as AIPAC and Obama’s surrogates took opposite sides. When Wasserman Schultz finally came out in favor of the deal, she again said she was doing so “as a Jewish mother,” and wept on CNN.

The deal out of the way, Wasserman Schultz set about contending with an election season in which Clinton appeared to be the inevitable nominee.

Sanders proved a more formidable candidate than anyone had anticipated, and there soon arose tensions. The senator accused Wasserman Schultz of favoring Clinton.

Wasserman Schultz vigorously denied the accusations — until last week’s dump by WikiLeaks of emails believed to have been hacked by Russians. There was no smoking gun showing an actual attempt to sabotage Sanders, but there were proposals to do so — the most damaging by Brad Marshall, the campaign’s finance boss, who suggested depicting Sanders as an atheist alienated from his Jewish heritage. (Sanders says he believes in God, and he celebrates his Jewish background.)

Wasserman Schultz is down, but not yet out, of the ’16 campaign. Negotiating her exit from the DNC, she secured a senior spot on the Clinton campaign, and she insisted in sticking out the week. She also said she wanted to speak at the convention, before opting to stay away from the stage “in the interest of making sure that we can start the Democratic convention on a high note,” she told the Florida Sun-Sentinel.

Wasserman Schultz faces a Sanders backer, Tim Canova, a law professor, in her district in the primary next month. Canova, spurred by Sanders’ enthusiastic endorsement, has raised more money.

Ron Klein has known Wasserman Schultz since they were both elected to the Florida House of Representatives in 1992, when Wasserman Schultz was 26. He is now consulting with Democrats, and said he expected her to triumph, in part because she remains a hyperactive campaigner who is still beloved in her district.

“First things first,” he told JTA. “She has to fight hard and win this next election.”

And don’t count out the return of Wasserman Schultz to a leadership role, Klein said.

“Maybe she will go forward and try to run within the House leadership down the road,” he said.