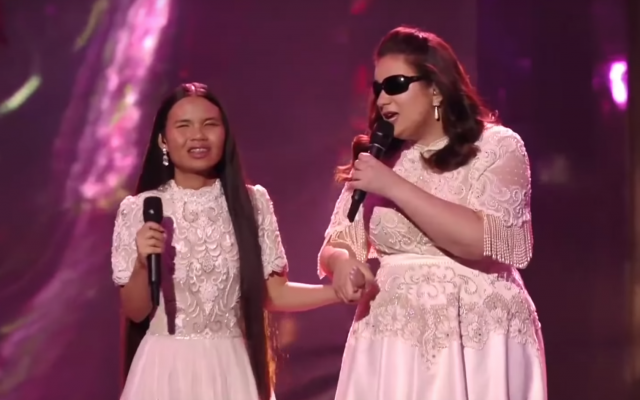 The Shalva Band performs at the second Eurovision 2019 semifinal in Tel Aviv on May 16, 2019 (YouTube screenshot)

An emotional performance by the Shalva Band at Thursday’s Eurovision second semifinal earned widespread praise from viewers in both Israel and abroad, who hailed the band for its message of inclusivity and acceptance.

Shalva Band, which dropped its widely supported bid to represent Israel at the Eurovision contest in order to avoid performing on the Sabbath, took to the stage Thursday as guest artists, performing the song “A Million Dreams.”

Following the performance, thousands of Eurovision fans took to Twitter to praise the band, whose members are made up of musicians with disabilities.

The Eurovision organization called the band inspirational for “inspiring us to think differently about challenges and acceptance,” while many viewers at home said the performance brought them to tears.

The group received a long standing ovation at the end of their act, and host Bar Refaeli appeared to be holding back tears as she remarked on their performance.

Shalva Band. Just one of a million reasons why #Eurovision is THE GREATEST SHOW! pic.twitter.com/Co12y88tVd

The Shalva Band were finalists on the reality TV show “Rising Star,” that was to determine Israel’s entry for the annual song contest taking place this week in Tel Aviv, but the group quit the show over the prospect of being forced to break the Jewish day of rest if selected as the winner.

Eurovision contestants are required to perform onstage in the general rehearsal, which will be held on Friday evening — 24 hours before the tournament’s final.

On Friday, the band’s artistic director, Shai Ben Shushan told Army Radio that despite forgoing participation in the song contest, they had received numerous invitations to play shows abroad in the wake of Thursday’s performance.

“We were invited to play shows in Europe,” he said in an interview. But Ben Shushan stressed that if the band decided to go on tour, they would not abandon their goal of helping make life accessible to disabled Israelis.

“The heart-warming response from the public is so much more important to us than Eurovision,” he said.