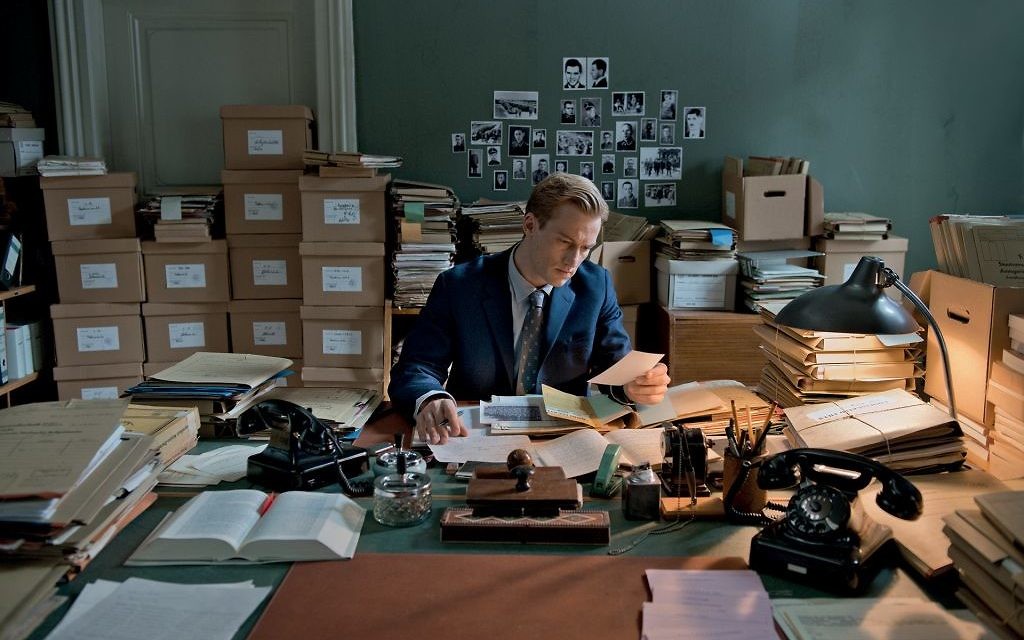 When a filmmaker works with historical material there is always the temptation to allow an audience to feel smugly superior to the characters on the screen. Yes, we know that Dec. 7, 1941 is a lousy day to plan a wedding in Waikiki, that Napoleon shouldn’t be making long-term plans for the French government on the morning of Waterloo. It’s a bit like the rather snarky frisson you get in a teen-slasher horror film when some kid insists on looking in the basement.

When a film’s creators eschew that smirking little pleasure and attempt to do something subtler and more complex, something that heightens an audience’s ambivalence, and deepens the ethical ambiguities surrounding historical choices, that is quite a different story.

At its best moments, that is what the new German drama “Labyrinth of Lies” manages in its retelling of the Frankfurt Auschwitz trial of the early 1960s.

About a third of the way into “Labyrinth,” a young state prosecutor, Johann Radmann (Alexander Fehling, who is reminiscent of the young William Hurt, albeit with less of Hurt’s self-consciousness) is sitting alone in his darkened office reading for the first time of the crimes committed in Auschwitz. The scene takes place in 1958 or ’59. We know what he will find. We’ve read the books, seen the film footage, heard the testimony. Auschwitz has regrettably few secrets for us, which makes his reluctant compulsion to learn more profoundly moving.

Writer-director Giulio Ricciarelli makes it clear that in the post-war “economic miracle” of Adenauer’s Germany, these realities are actually a mystery to almost all Germans, that in little over a decade, West Germany has managed to develop a complete case of historical amnesia, compounded by the pervasive presence throughout the government and social institutions of ex-Nazis. What makes the moment so effective is that Radmann doesn’t know what we know, and that knowledge is so cataclysmic that when he acquires it his world will be rocked off its foundations. He will, as we also know, return the favor.

At such a juncture, Ricciarelli (along with co-writer Elisabeth Bartel) earns the right to withhold from us the unpleasant but familiar shocks on which such films are usually focused. When an Auschwitz survivor pulls up his eyepatch, Ricciarelli shoots him from the back letting the reaction of the attorneys and our well-schooled imaginations supply the worst. We never see the by now over-used footage of stacks of corpses, and the film’s only conventional horror-movie-type moments occur in a dream that plagues Radmann.

In a sense, what Ricciarelli, a veteran actor and producer making his feature film debut, has done is to make us focus on Radmann’s reaction to those atrocities to which we have become inured. It’s a thoughtful and effective narrative strategy and one that makes the protagonist’s moral evolution, from naïf to crusader to sadder-but-wiser (but still committed) realist, satisfying.

Unfortunately, “Labyrinth of Lies” is plagued by other lesser demons that crop up frequently in such historical films. The second half of the movie is paced too slowly and with little variation in tempo. Many members of the supporting cast are playing attitudes more than characters, with the outstanding exception of Gert Voss, whose tough-but-fatherly chief prosecutor, a Jew, gives the film a moral anchor. The complications in Radmann’s private life are a bit too clichéd to really convey the excruciating impact of working with such unrelentingly gruesome realities.

Yet there are those startling moments in the film, particularly in the first hour, when we are brought face to face with the most troubling mysteries of human behavior. The answers the film offers in its second half don’t really explain anything but, then, what has?