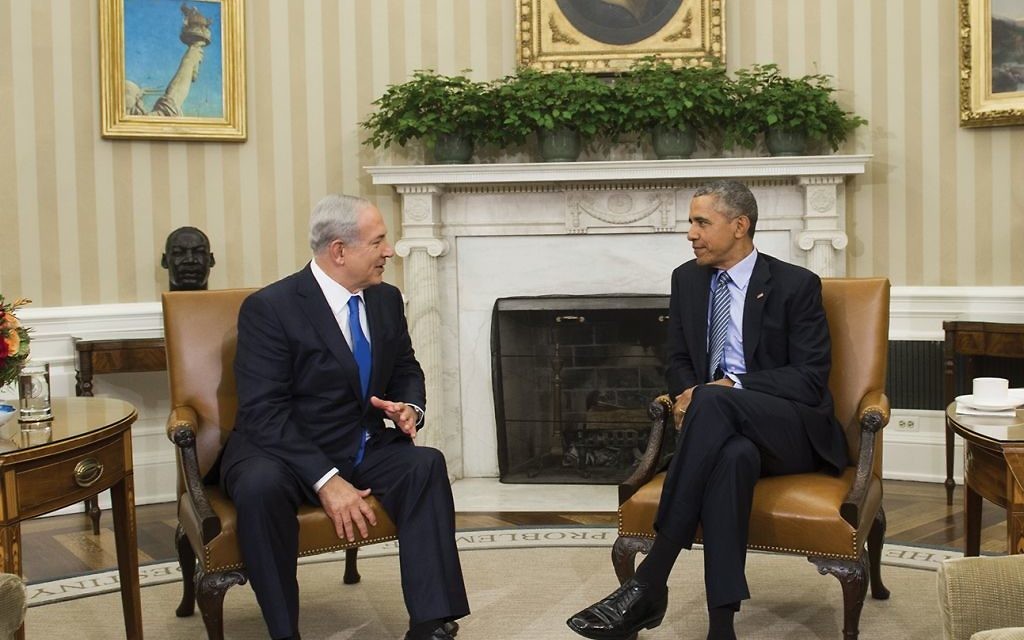 Israeli Prime Minister Benjamin Netanyahu met with President Obama Monday to “focus on how to go forward,” but some believe he should have also tried to make amends with Congressional Democrats — a view rejected by Rep. Steve Israel (D-Queens, L.I.).

The congressman, the highest-ranking Jewish Democrat in the House, said that what really “counts is not the particular mood of a particular leader on a particular day; what counts is what is happening on the ground in Israel between the U.S. and Israeli counterparts — and in that there is no daylight.”

He was reacting to the comments of Seymour Reich, a former chairman of the Conference of Presidents of Major American Jewish Organizations, who said Netanyahu “created a cleavage not only with the Democratic Party but with the American Jewish community” when he asked them in March to oppose the Iranian nuclear agreement Obama had negotiated.

“He put us on the spot,” Reich said of Netanyahu. “There was great tension and acrimony against those who supported the deal — not only against Democratic officeholders but others.”

But Rep. Israel said, “We need to start focusing on the positive instead of cleavages in the relationship.”

That relationship is so positive, he maintained, that he believes Congress will approve next year an enhanced security package for Israel that will increase American military aid from the current $3 billion annually. Israel reportedly is seeking $5 billion annually.

“I am quite optimistic that this package of security enhancements for Israel will pass on a bipartisan basis next year,” the congressman said. “This is going to be a test. There are many Republican members of Congress who will try to use Israel as a political football and exploit the differences between President Obama and Prime Minister Netanyahu. Now with a new package of security enhancements for Israel we will see whether those members really care about the relationship and will vote for the package. Let them put their money where their mouths are.”

Strong Republican support for Israel — as evidenced by House Speaker John Boehner’s invitation to Netanyahu to address a joint meeting of Congress about his objections to the Iran deal — is expected to be continued by his successor, Paul Ryan of Wisconsin.

Ryan supported the imposition of restrictions on U.S. aid to the Palestinian Authority and opposed a unilateral declaration of a Palestinian state. Despite the need for budget cuts, many observers don’t believe Republicans would block increased aid to Israel.

Although the current 10-year framework agreement with Israel for U.S. defense assistance does not expire until 2017, Obama said he wanted to begin renewal discussions now. Rep. Israel said he agrees with that approach, noting, “Some of the enhancements may require changes in Israel’s military infrastructure, as well as ramp-up time.”

After his meeting with Obama, Netanyahu told the American Enterprise Institute, a Conservative think tank, that Obama had told him U.S. military aid to Israel is “also a very solid investment for American security.”

“We’re an ally that doesn’t ask for any American troops,” Netanyahu was quoted as saying. “We never have and we don’t intend to. We can defend ourselves. We just want to have the tools. … You spend on the wars in Afghanistan and Iraq a trillion and a half. So that’s five centuries’ worth of support for Israel.”

Netanyahu told Israeli reporters that he and Obama did not “focus on an exact sum, but I presented our needs.”

Israeli media reports said Obama agreed to increase the amount of military aid but did not cite a figure.

Rep. Israel said Congressional approval next year of an enhanced security package would also “be a signal to Iran that we have Israel’s back and that Iran shouldn’t play games.”

Rep. Nita Lowey (D-Westchester, Rockland) insisted in an email that “our bipartisan collective support for Israel has never been stronger, and our military and intelligence cooperation has never been closer. As the ranking member of the Appropriations Subcommittee on State and Foreign Operations, I will continue to do everything in my power to make sure Israel continues to receive our support and to strengthen the steadfast relationship between our two great countries.”

She added that the U.S.-Israel relationship “goes much deeper than any one policy issue.”

Rep. Eliot Engel (D-Westchester, Bronx) echoed those sentiments, saying in an email, “Support for Israel is bipartisan and always has been. Just look at the letter [Foreign Affairs Committee Chairman Ed] Royce and I sent to President [Mahmoud] Abbas last week condemning Palestinian incitement: nearly 370 House members signed on. Presidents come and go. Prime ministers come and go. Even members of Congress come and go. But the U.S.-Israel relationship is unshakable, and support for Israel in Congress is strong and bipartisan.”

Aaron David Miller, a former U.S. peace negotiator and now vice president at the Woodrow Wilson International Center for Scholars, agreed with Rep. Israel that Netanyahu has nothing to apologize for.

“The main goal of the visit was to turn the proverbial page, it was not a fundamental reset,” he said. “The Iran deal is done and there is no merit in opening it. Now is the time to demonstrate that the U.S.-Israeli relationship still functions.”

Miller acknowledged that “there are a lot of Democrats who are angry and who don’t like the prime minister’s policies when it comes to so many things.” But he questioned how relevant that is going to be “in an election year — Democrats and Republicans will be competing over who loves Israel more.”

Before Netanyahu arrived in the U.S., the Obama administration said a peace agreement between Israel and the Palestinians was unlikely before Obama left office and that efforts would be focused on managing the situation against a backdrop of five weeks of Palestinian terror attacks.

In a brief press availability with Netanyahu before their meeting, Obama affirmed Israel’s right to defend itself and made no mention of “increased [Israeli] settlements” as being the cause of the violence, a claim Secretary of State John Kerry had made last month.

Peter Joseph, chairman of the Israel Policy Forum, said he heard Netanyahu say repeatedly while here that he supports a two-state solution with a demilitarized Palestinian state that recognizes the Jewish state of Israel.

“I would like to see what steps Israel takes towards a two-state solution that would give the Palestinians some hope and that would be in accord with the expressed wishes of the U.S. and Israelis,” he said. “We have yet to see it.”

Israel’s Channel 2 reported that Netanyahu and Obama agreed to a series of practical steps (which it did not detail) that both Israel and the Palestinian Authority would take to calm tensions and end Palestinian violence that by the beginning of this week had killed 11 Israelis. Another 72 Palestinians were killed by Israeli gunfire, including 45 people who were reportedly attacking or attempting to attack Israelis with knives, guns and cars.