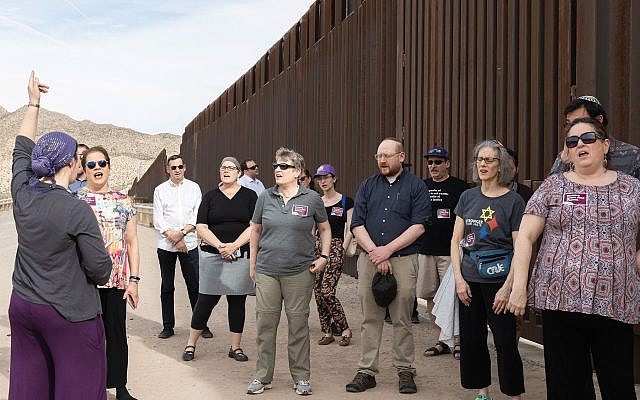 The author, with gray shirt and sunglasses, with rabbinic delegation at the U.S.-Mexico border. The group conducted a Mincha service there. Photos courtesy of T’ruah

The Trump administration announced recently that it is proposing to change our immigration to one of point-based merit standards, standards that would have blocked the ancestors of most American Jews, indeed of most Americans, from ever being allowed into the country.

This announcement, unfortunately, was just the latest move in Trump’s all-out war on immigrants and asylum seekers — ranging from aggressively prosecuting and deporting undocumented immigrants, to eliminating Temporary Protected Status for numerous vulnerable groups, to drastically reducing refugee admissions amid a worldwide refugee crisis, vowing to build a border wall and, perhaps most outrageously, separating parents and children arriving together at the border.

Our administration’s policies are not just inhumane. They are in conflict with our most basic Jewish values. During this time in the Jewish calendar, we have been counting the Omer, the days between our freedom from slavery and our receiving the Torah — which opens by stating the inherent equality of all people, that we are all created b’tzelem Elohim, in the image of God. 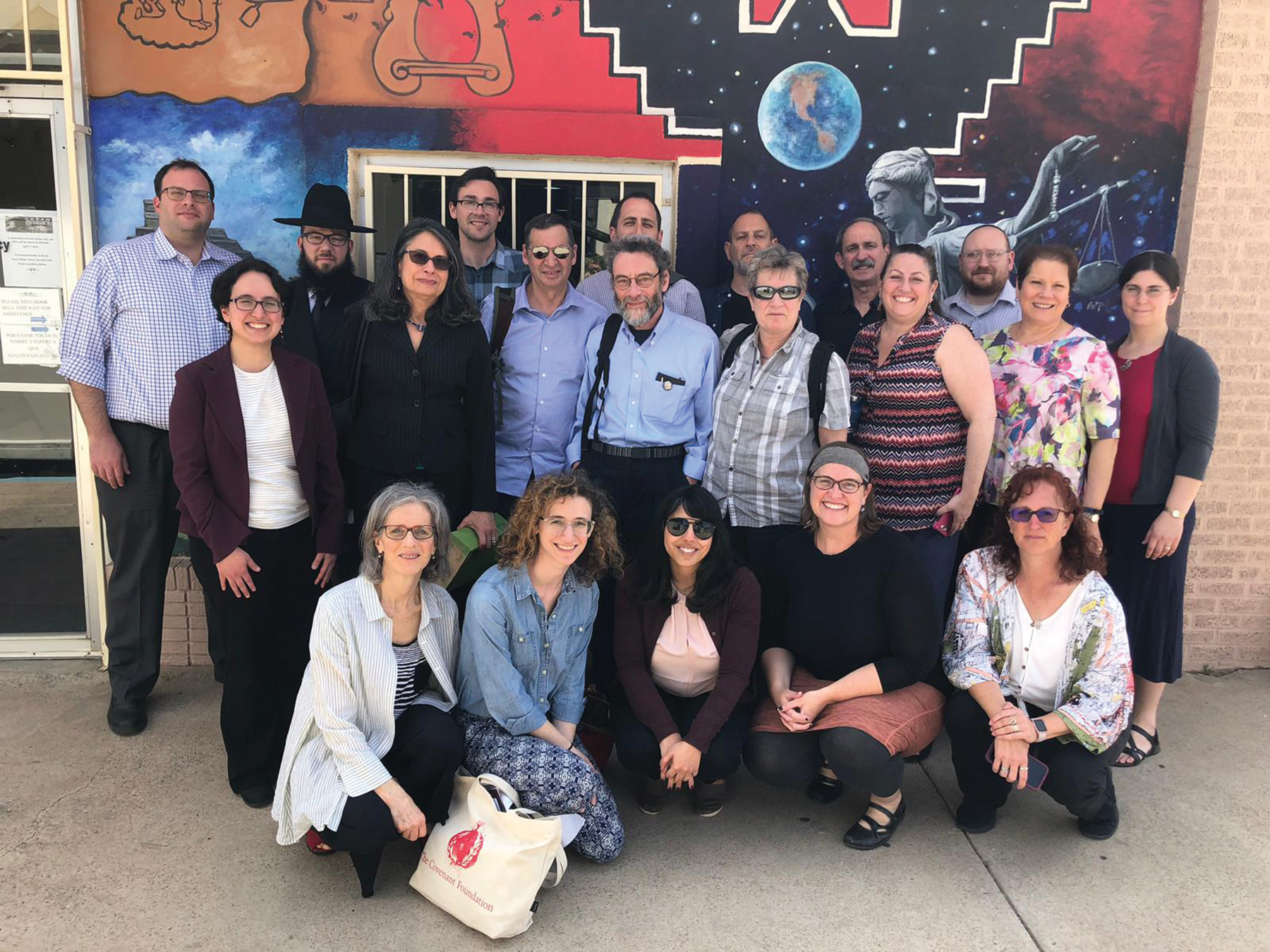 The rabbinic delegation in El Paso.

I recently witnessed firsthand the misery Trump’s assault on immigrants is causing when I visited the Mexico border with 17 other Jewish clergy, in a trip organized by T’ruah: The Rabbinic Call for Human Rights and HIAS. In a migrant facility we visited, when we asked about rules preventing children there from being hugged, even hugging their siblings, the staff person leading us around acknowledged, “Yes, but we understand that they are also human,” as if somehow this fact were up for debate. At this moment, I realized I had landed in the topsy-turvy world of today’s U.S. immigration system, a world where a child’s humanity is up for grabs, and where the law, not to mention basic compassion, is constantly flouted.

Our trip began at Otero Detention Center, a migrant detention facility for teenage boys outside El Paso. Otero is accused of many violations: poor nutrition, overuse of solitary confinement and sexual abuse of LGBT individuals. There is only one part-time doctor for this 1,089 bed facility. Yet there are four sitting judges presiding in courtrooms located right in the building. Inmates with lawyers? Thirty percent. Asylum claims granted? Three percent.

I purposely use the word “inmate” here because Otero is basically a prison. Let me explain. When we arrived, two Immigration and Customs Enforcement (ICE) officers greeted us. We surrendered our IDs and cell phones and went through security. The “warden” was our guide. The detainees are dressed in prison jumpsuits. The facility is locked, yet inside, the dormitories are locked behind bars. Outside we saw detainees in chains being loaded onto a bus.

These tours were painfully awkward, seeing young men locked in rooms waiting to be processed or for medical care; seeing young girls eating lunch, or walking past their open bedroom doors. We were essentially invading what little privacy they have, visitors with no permission to visit or communicate other than to wave or give a sympathetic smile. Each moment, we are reminded that these are children, not criminals. Yet, they are detained as if they are criminals, in for-profit facilities funded by our tax dollars.

That same day, we visited Las Americas Immigrant Advocacy Center, an organization offering legal services to migrants, and Annunciation House, a shelter where director Ruben Garcia performs herculean efforts each week to house hundreds of migrants. A young man there told me he walked five months from Honduras to get here. He hugged me and I was startled, but then leaned in to this opportunity for human contact.

The following day, we traveled to a migrant shelter in Juarez. On our return, we saw dozens of people detained in cages underneath the bridge leading back to El Paso. Later, as we prayed Mincha (the afternoon service) at the border fence, we were greeted through the metal slats by a group of children, wanting to talk. Taped on the fence were photos of Jakelin Maquin and Felipe Gomez-Alonza, the two children who died in custody last year. Since our visit, three more children have died in custody. A Customs and Border Patrol vehicle drove by, kicking up dust. Reluctantly, we left.

As an American, I am guided by our values of freedom and equality. As a Jew, I am guided by our belief in the ultimate redemption of our world. These are our goals, our aspirations. As we have counted each day of the Omer, we move one step further away from the dehumanization of slavery and one step closer to tzelem Elohim, what it really means to be fully human. Jewish history is replete with stories of flights from danger and persecution. May we use this time of the Omer, as we remember our journeys, to help other people who are still on theirs.

Rabbi Susan L. Falk most recently served for 11 years as the rabbi for the Congregation Kehilat Shalom, a Reconstructing Judaism synagogue, in Belle Mead, N.J. An active member of T’ruah, Rabbi Falk resides in Brooklyn with her partner and is currently working on a book of Haftarah commentary.