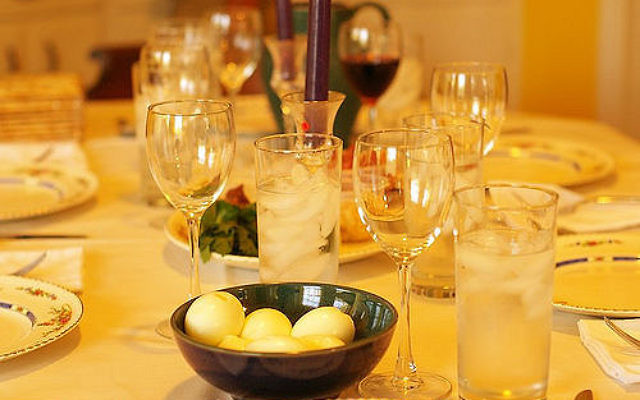 A week before the beginning of Passover this year, I attended a model LGBTQ seder sponsored by JPride, a Jewish organization in Baltimore on whose board I sit. Rabbi Andy Gordon (who came to Baltimore after serving congregations in Roslyn, L.I., and Scarsdale), led the ceremony at his Reform shul, the Bolton Street Synagogue. He asked us to declare what we wanted to be liberated from, and people got up and spoke movingly about the pain of being marginalized for their gender identities. I felt ashamed to announce it publicly, but I told everyone at the seder, including my children, that I sought to be freed from job-seeking, having been unemployed since last Tisha b’Av.

Despite the pervasive stereotype about Jews being good at making money, unemployed Jewish characters are common in our culture. Think of Reb Smolinsky in Anzia Yezierska’s 1920s novel “Bread Givers,” who insists on studying Talmud all day and letting his wife and children starve. Canadian writer A.M. Klein’s surrealistic 1930s short story, “Friends, Romans, Hungrymen,” begins with a boss laying off the hapless narrator by wrapping him in a package and putting him on a shelf; he wriggles out of the package and starts seeking food, but is almost run over by Ezekiel’s chariot. Even God refuses to spare him a dime for coffee. He appears to take it all in stride.

The out-of-work, mediocre actor played by Richard Dreyfuss in Paul Mazursky’s 1988 film satire “Moon Over Parador” ends up with the role of a lifetime when he is forced to impersonate a Latin American dictator who has just died; he ends up enjoying the lavish lifestyle and public attention, along with the favors of the dictator’s mistress, Madonna, played by Sonia Braga.

But for many film characters, even in comedies, unemployment is devastating. Virgil Starkwell, played by Woody Allen in his 1969 mockumentary “Take the Money and Run,” fails at robbing a bank and ends up on a chain gang. (When he complains, he gets locked up in a sweat box with a life insurance salesman.) Mel Edison, played by Jack Lemmon in the 1975 film version of Neil Simon’s “Prisoner of Second Avenue,” cannot handle being idle and depressed after losing his job as an adman; he takes it out on his devoted wife. Richard Kind plays Arthur Gopnik, the jobless, emotionally lost brother of Larry (Michael Stuhlbarg), the protagonist in the Coen Brothers’ 2009 black comedy, “A Serious Man.”

On television, by contrast, unemployment is often played for laughs. On “The Sarah Silverman Program,” the comedian’s childish character, who lacks employment, relies on her sister, played by her real-life sibling, Laura, for moral and financial support. And Ron Feldman plays an unemployed 30-something bachelor who is looking for love on the hit Israeli TV show, “Ron.”

But in real life, unemployment is no laughing matter. Even those who work for synagogues — I was the executive director of a Conservative shul — typically do not qualify for unemployment benefits, because religious organizations are exempt under the First Amendment from paying into state unemployment insurance coffers.

Beyond the lack of money, unemployment is a hard thing to talk about, even with friends and family. It casts a pall over the household, and both partners and children are affected by the anxieties that it causes.

In an odd way, though, it feels more in tune with Passover than prosperity does. After all, prosperity and Passover mix in an uneasy way. I have always wondered why we sing in such a lighthearted way about having been slaves to Pharoah. Then, not really knowing what it was like to suffer in Egypt, we look for parallels in degradation in our own society. At my family’s seder this year, taking the suggestion of Rabbi David Leipziger Teva, the chaplain at Wesleyan University, we tossed a pair of shoelaces on the seder plate to remember the contemporary Latin American refugees and asylum-seekers, whose shoelaces are confiscated when they encounter border officials. Their exodus is, in many cases, not leading to the redemption in America for which they had hoped and dreamed. But did the shoelaces enable us to empathize with their plight?

On the morning of the first seder, I was elated to receive a call from a major Jewish organization offering me a job. So I was able to celebrate the seders with great joy and relief. But I’m planning to organize a seder next year for those who are unemployed. In passing over their plight, we diminish what the holiday should mean, as a prod to understanding, kindness and empathy.