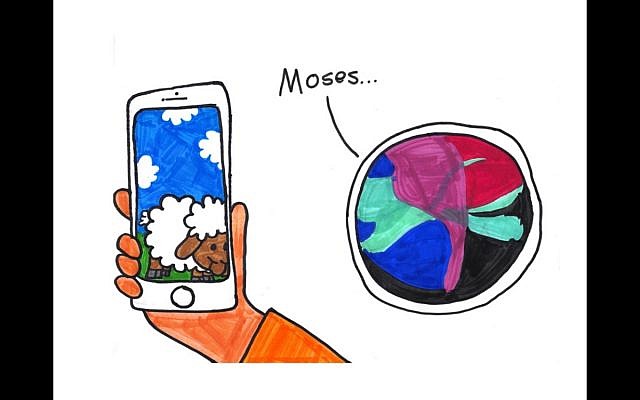 The Passover Haggadah speaks of the Four Children, symbols of the diverse ways in which different people can access and interpret the story of the Exodus from Egypt. My son Ezra, an autistic young adult, is constantly surprising us with his own new and creative ways of wrestling with Jewish tradition.

As a young child he performed a dramatic, one-kid reenactment of the Ten Plagues that became an annual tradition at our family Seder. An enthusiastic expert on Disney and Pixar movies, Ezra created an “Animation Haggadah” a few years ago, with Wreck-It Ralph breaking the matzah, Elsa from Frozen demanding that Pharaoh “Let it Go!,” and an original version of “Echad Mi Yodeah?” (“Who knows five? I know five! Five is the number of Simpsons.”)

Here’s Ezra’s latest, “The Story of Passover: As Told Digitally.” My wife, Shawn, a rabbi, calls it an effort to examine our relationship with technology through the lens of our master narrative. I call it just plain fun.

I share it in the hope that Ezra’s work will inspire people of all ages and abilities to find new and creative ways to find themselves in the Haggadah.

By the way, for more of Ezra’s creative perspectives, check out his new podcast, “Animation…and Beyond!,” available at Bandcamp.com. The latest episode is a holiday special that features discussions of Prince of Egypt, the Easter movie Hop, and “A Rugrats Passover,” among others.

Tom Fields-Meyer, a Los Angeles writer, is author of the memoir Following Ezra and coauthor of many books, including, with Dr. Barry Prizant, “Uniquely Human: A Different Way of Seeing Autism.”