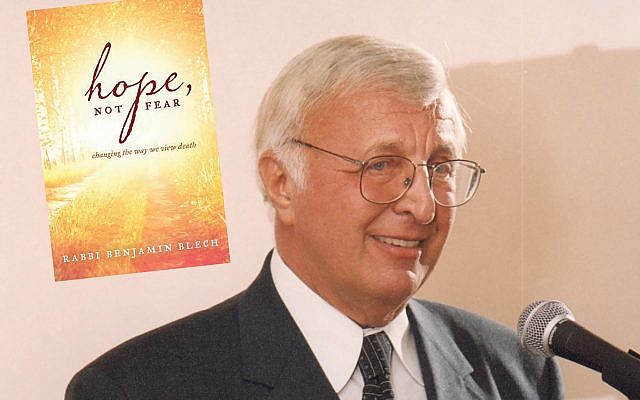 “To understand death,” Rabbi Blech says, “is to enter a realm that of necessity requires faith as a guide.” Most religions “have somehow come to very similar conclusions: There is life after this life.” Courtesy of Benjamin Blech

“Under the harvest moon,
when the soft silver

Drips shimmering over
the garden nights,

Death, the gray mocker,
comes and whispers to you

As a beautiful friend who remembers.”

Sandburg had it mostly right, we gather from Rabbi Benjamin Blech’s compelling new book, “Hope, Not Fear: Changing the Way We View Death” (Rowan & Littlefield Publishers). To Jewish mystics, death is a promise, not a mockery, writes the rabbi. What happens to our dead selves — to our souls, anyway — is poetic, romantic even. This life is only a prelude, says Pirkei Avot (Ethics of the Fathers), the anteroom before the afterlife.

Rabbi Blech is a scholar, a professor of contemporary Jewish issues at Yeshiva University, but in a conversation at his West Side apartment, he tells us, “I did not intend this [to be]a book for scholars.” Rather, at 139 pages, without footnotes but with seven additional pages of suggested contemporary readings (along with Maimonides’ “Treatise on the Resurrection of the Dead”), this slender but splendid book is conversational, an introduction to the subject for the ignorant (which is almost all of us). Death is almost never mentioned in classrooms or from pulpits. Most traditional Jews that we spoke to for this article doubted or didn’t know if a dead person was capable of hearing, though both Talmuds, Bavli and Yerushalmi, say the dead can.

The 85-year-old Rabbi Blech writes with the excitement of a blind person suddenly able to see the aurora borealis. On every other page, it seems, he discovers Jewish ideas about death that are “fascinating,” “remarkable,” and after all, what is more fascinating and remarkable than being convinced that death is not the end, that our consciousness and souls survive?

“I intended this book to be helpful to people, all people,” says the rabbi. The Torah itself is strangely coy about the afterlife, though hints are sprinkled throughout the Bible, but the siddur is more explicit: The Amidah (Shmoneh Esrei), the only prayer recited morning, afternoon and night, states definitively, five times in the opening paragraphs alone, that God is “the resuscitator of the dead,” the One who “restores life,” keeping His fidelity “to those who sleep in the dust.” The preface to every chapter of Pirkei Avot states: “All Israel has a share in the World to Come.” Most prayer books include Maimonides’ Thirteen Principles of Faith, including the unambiguous affirmation: “I believe with complete faith that there will be a revival of the dead.”

Rabbi Blech, who writes a weekly column for Aish.com, and is the author of The New York Times best seller, “The Sistine Secrets: Michelangelo’s Forbidden Messages in the Heart of the Vatican,” tells us, “To understand death is to enter a realm that of necessity requires faith as a guide.” Despite differing theologies, most religions, he says, “have somehow come to very similar conclusions: There is life after this life.” (“Hope, Not Fear” has been endorsed by leaders of Yeshiva University, St. Peter’s Seminary and the Islamic Center of Long Island).

Religion and science may seem to be coming at death from different directions, says Rabbi Blech, but doctors who didn’t believe in an afterlife are being forced to rethink that, as medical advances have proved increasingly able to revive patients thought to be dead. “At a medical conference in Houston, doctors told me that there was a new hospital rule forbidding doctors, during or after surgery, from kibbitzing or telling jokes, because there were people who ‘died’ for 20 minutes, no heartbeat, no brainwaves, were able to repeat everything the doctors said” — and the “dead” didn’t always appreciate the doctors’ wisecracks.

Patients of almost all religions, with near-death experiences, a term that wasn’t even used until the 1970s, “shared common experiences that were inexplicable, and universally consistent,” says Rabbi Blech. In 1975, Dr. Raymond Moody wrote “Life After Life,” a book exploring what the near-dead described: a cessation of pain; an onset of peacefulness; an out-of-body experience, such as floating over one’s own body; going through a ‘tunnel’; a magnetic, spiritual light force; a review of one’s life; meeting relatives or mentors who were already dead (but never seeing a person that was still alive); a surge of love. In Israel, one of the newspapers did a big story on Moody’s book in its weekend edition. After Shabbos, said Rabbi Blech, a radio program, featuring the then-chief rabbi of Tel Aviv, was fielding call after call: what about that book? Is there any validity to it? Rabbi Blech said the chief rabbi replied, “not only does it have validity, this is what Judaism has been trying to teach the world for thousands of years.”

In Genesis, the rabbi adds, “the first thing God created was light, but the sun wasn’t created until Day 4. That first day’s light was not light as we know it. Some say it was the [Heavenly] light we see when we die.”

In Exodus, says Rabbi Blech, “Moses asks to see God, who answers, ‘Man cannot see Me and live.’ In other words, you will see God [when you will live no more]. Blech cited the eulogy given for Apple’s Steve Jobs by his sister. Right before Jobs died, she said, he looked at his loved ones, “and then [he looked] over their shoulders, past them,” his final words being, “Oh wow. Oh wow. Oh wow!” Rabbi Blech surmised that the dead, like Jobs, saw God when they would live no more.

It is a Jewish tradition to go to the cemetery and ask the dead for assistance, or to invite dead relatives to a wedding. Rabbi Blech explained, souls not only have a consciousness, but they can communicate with the living.

In the “Small Miracles” book series, by Yitta Halberstam and Judith Leventhal, they document death-to-life communications during the Holocaust. One woman, Esther, said that in Sobibor she had a dream in which her dead mother gave her detailed instructions and a vision about escaping to a barn, 35 miles away, in a dangerous Nazi stronghold. “Here you’ll go,” said the mother, “and here you’ll survive.” The next day, 300 prisoners revolted and Esther escaped into the forest. After almost a week of following her mother’s nocturnal navigation, Esther found the barn that matched the vision. She sensed another person hiding in the dark. At dawn she saw it was her brother. And there they hid safely until the war’s end. How could Esther possibly have known how to get from Sobibor to that exact barn, 35 miles away, without her dead mother’s guidance from the Other World?

Another story: Rabbi Blech said, “I had someone in my shul who was a bombardier in World War II. He was flying in combat and heard his father, who was dead, call his name. The son turned. A bullet whizzed by. The son would have been shot if he hadn’t turned.

“Obviously,” said Rabbi Blech, “the question is, why didn’t [these warnings] happen to the next guy? I can’t answer that. All I can say is, if it can happen even sometimes, that means communication between the living and the dead exists.”

The dead can become the living. Rabbi Blech writes in “Hope, No Fear,” many “have mistakenly claimed that the concept of reincarnation has no source in Judaism. That is not correct. It has long been a part of the Oral Tradition. The Zohar, the classic work of Jewish mysticism, makes frequent and lengthy references to it. … Nachmanides (Ramban) attributed Job’s suffering to reincarnation.” Mystical texts consider Mordechai, whose pivotal moment in the Purim story was refusing to bow to Haman, to be the reincarnation of Jacob, who wrongly bowed to Esau. Jacob “required another lifetime,” writes Rabbi Blech, “in order to atone” for bowing to his brother. Moses, who floated in a basket (same Hebrew word as “ark”) on the Nile, was the gilgul (reincarnation), echoing and repairing Noah’s story. It happens to the most modest among us. Reincarnation, he writes, “offers a powerful response to the problem of theodicy, the lack of reward for the righteous or punishment for the wicked during our lifetimes.”

The ancient Jewish mystics say that when the angel taps the indentation above our lips before birth, we forget who we were, how we died in our previous life, and what failings we are supposed to repair by rebirth.

After Six Million Jews were murdered, one-third of them children, God decided to provide them with another chance, say some. Many were “reborn,” writes Rabbi Blech, “to live out their lives anew.”

The rabbi is a gentle persuader. He immediately concedes, “We need not accept it at face value. We need only to acknowledge that it is possible.” People often pray for a second chance, he says. “God sometimes agrees.”