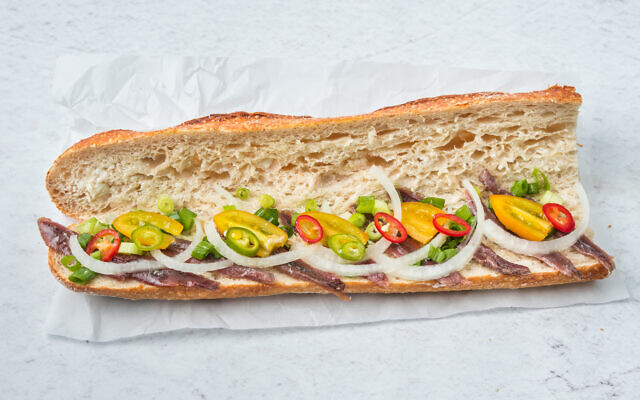 An anchovy sandwich from Sherry Herring, the new Upper West Side outpost of a famed Tel Aviv sandwich shop. (Courtesy)

HATE ON TRIAL: Jury selection began Monday in a civil trial targeting the organizers of the deadly 2017 Unite the Right rally in Charlottesville, Virginia. (NPR)

DEEP DIVE: UJA-Federation has a new online tool to analyze the pandemic-related needs and experiences of Jewish households in the five boroughs, Long Island and Westchester. You can slice the data from its recent COVID-19 impact study of economic and emotional measures by age, gender, poverty status and/or geographic area.

NOSH SO FAST: Sherry Herring, the renowned sandwich bar in the port of Tel Aviv, has opened a branch on the Upper West Side. Tuna and salmon sandwiches are on the menu, but you’ll have to wait for the herring: Owner Sherry Ansky says a batch of 15,000 filets that are being seasoned at a processor in the Netherlands won’t be here until December. (Jewish Week via JTA)

RACK ‘EM: Native New Yorker JoAnn Mason Parker, a Jewish billiards prodigy who in 1990 became the youngest-ever winner of the U.S. Open 9-Ball Championship, is staging a comeback. Since retiring from the pro circuit 26 years ago, she has taught pre-kindergarten at a Jewish day school in Boca Raton, Florida, and done charity work. (J. The Jewish News of Northern California via JTA)

OBIT: Gene Freidman, a Jewish immigrant from the Soviet Union who made his fortune — and countless enemies — by buying and brokering New York City taxi medallions, has died of a heart attack at age 50. The “Taxi King” pleading guilty in 2018 to bilking the Metropolitan Transportation Authority out of surcharge revenue, and was part of a scheme to artificially inflate the price of the medallions, leaving a generation of drivers in insurmountable debt. (New York Times)

AFFAIRS OF STATE: Henry Kissinger’s often strained relations with the pro-Israel lobby during his tenure as Secretary of State are discussed in a new book by Martin Indyk, the one-time U.S. Mideast envoy. (New York Times)

Two New York rabbinical students, Nicole Fix from the Reconstructionist Rabbinical College and David Elitzer from Hebrew Union College-Jewish Institute of Religion, are among seven students to receive a T’ruah Israel fellowship, an intensive study and experiential learning program for North American rabbinical and cantorial students. In addition to her rabbinic studies, Fix is a founder of Page 73 Productions, an NYC-based theater company, and also produced the monthly literary reading series The Lantern. Elitzer, who holds degrees in architecture and public policy, has conducted archaeology and cultural heritage fieldwork in Israel, Turkey, Italy, Bosnia and Herzegovina.

Join the Museum of Jewish Heritage for a virtual screening and discussion of “Soros,” a new film that follows financier and philanthropist George Soros across the globe and pulls back the curtain on his personal history, private wealth, and public activism. Featuring director Jesse Dylan and producer Priscilla Cohen, and moderated by Jessica Shaw, host of EW Live on Sirius XM. Attendees will also receive a private link to stream the film online from October 21 to October 27. Register here. 3:00p.m.

SVIVAH spotlights four speakers who will teach about making Jewish ritual and institutions more accessible: Tobey Lass Karpel, a behavior analyst who has worked with hundreds of kids on the autism spectrum; Sara Portman Milner, co-founder and director of Student Services at Sunflower Bakery; Rabbi Ruti Regan, a feminist rabbi and theorist at the Harvard Law School Project on Disability; and Rabbi Lauren Tuchman, the first blind woman to enter the rabbinate. Register here. 8:00 p.m.