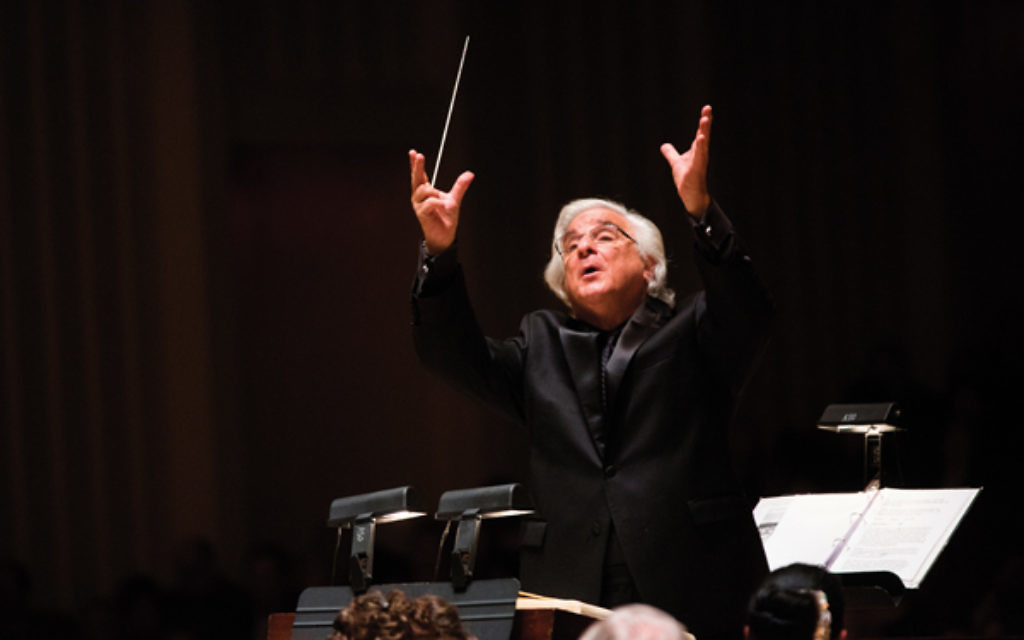 It was a simple act, one that book-lovers perform every day. But it changed Murry Sidlin’s career forever.

Twenty years ago on a beautiful spring day in Minneapolis, Sidlin, already a highly regarded orchestra conductor and professor of music, found himself walking past a used bookstore in front of which was a table piled high with bargains. Naturally, he recalled in a telephone interview from his home near Baltimore last week, he stopped to browse, and in the midst of a wobbly pyramid of paperbacks noticed one book that was sticking out slightly.

“It became a game, to see if I could extract that one book without disturbing the pile,” he said, laughing. “And I did.”

The book was a small work entitled “Music in Terezin,” a short précis of the difficult but rich cultural life created by the Jewish prisoners of the concentration camp in Nazi-occupied Czechoslovakia.

Sidlin was riveted and baffled. And energized. “Defiant Requiem,” the program that he would create in response, would take many forms, from an Emmy-nominated documentary film to a series of widely acclaimed concerts with narration. In that latter form, “Defiant Requiem: Verdi at Terezin” will be performed Monday, March 9.

Sidlin, 74, remembers looking at the little book in confusion.

“Terezin? Where is that,” he said he asked himself. “I knew it was a concentration camp — a showplace for the Nazis — that was the way it was presented, and a lot of people thought that, myself included.”

Essentially, what the Nazis had done was to take a medieval Czech fortress town and convert it into a massive, horrifically overcrowded ghetto and transit camp. From there the next stop was Auschwitz.

The response of the Jewish prisoners was nearly unique. They created a rich cultural life for themselves, as Sidlin noted, including “2,400 lectures, 16 performances of the Verdi Requiem, 38 performances of [Smetana’s opera] ‘The Bartered Bride,’ 50 performances of [Czech children’s opera] ‘Brundibár,’ and performances of ‘Tosca’ and ‘The Magic Flute,’” as well as cabaret and jazz events.

One figure at the heart of their cultural efforts was Rafael Schächter, a Romanian-born Czech conductor, composer and choral director, whose promising career in opera was cut short when the Nazis invaded Czechoslovakia and banned Jews from public life. Sidlin’s discovery had a succinct three-page chapter on Schächter, ending with his crowning achievement in Terezin: 16 performances of Giuseppe Verdi’s Requiem Mass.

Sidlin, a son of Jewish immigrants who lost family in the Shoah, readily admits that he couldn’t believe what he was reading.

“I know what it takes to perform this piece under optimum circumstances,” he said last week about the massive, densely wrought work. “There’s so much wrong with that. Why would these people use precious time to learn a work so steeped in the Catholic liturgy? He had only one copy of the score; how could he teach this by rote to an entire chorus?”

“These people are eating gruel twice a day, with no real nutritional value, there’s no medical attention; if you’re ill there’s little you can do about it,” he said. “They work all day, people are dying of malnutrition and disease, there is the constant terror of violence and deportation. There are dead people lying in the streets. They’re living in filth. And they’re going down into a dank, cold basement to learn the Verdi Requiem and give 16 performances? There’s either something radically wrong here or something extraordinary.”

Sidlin quickly learned that it was the latter. He left Minneapolis shortly after to become resident conductor of the Oregon Symphony. He also taught at Pacific University, just outside of Portland, where he became friends with two Holocaust scholars on the faculty. In the very early days of the Internet, they helped him begin researching the cultural life of Terezin, most specifically Rafael Schächter’s Verdi Requiem.

Against all odds, Sidlin would track down and become good friends with Edgar Krasa, who had not only sung in the choir that performed the piece in Terezin but had been Schächter’s bunkmate and friend. He would meet and interview several other survivors from those performances as well.

Eventually, Sidlin decided to put together a performance of the Requiem to be given at Terezin, an event that took place in 2006. By this time he was a professor at Catholic University, where he continues to teach today, and had an excellent student choir and a talented orchestra that would be supplemented by local Czech musicians.

And he found himself working with a documentary filmmaker, Doug Shultz, who brought along a film crew and made a film, “Defiant Requiem,” about the Terezin trip and performance, “Defiant Requiem.” That effort also put Sidlin in touch with actress Bebe Neuwirth.

“We were looking for a narrator and Bebe’s name was on the list, and she came in and read,” Sidlin recalled. “I called Doug and said, ‘I was just listening to [a tape of] Bebe Neuwirth and I was just going to call you,’ he said. ‘We loved her voice. It’s a storytelling voice.’”

Although she has done plenty of dramatic work, Neuwirth is usually thought of as a comic actor, singer and dancer. Not a problem, she told Jewish Week.

“Any acting piece — slapstick or Shakespeare, however funny or tragic it is — they all require a scrupulous adherence to the truth,” she said in a telephone interview last week. “You’re always looking for the truth.”

When Sidlin decided to create a live vehicle that would combine elements Shultz’s film and a full performance of the Verdi piece with a recounting of the events in Terezin, it was logical that Neuwirth would be one of the actors he contacted, and she was delighted to be asked back.

“I’m honored that they invited me to do the documentary, and that they invited me to do the concert [two years ago], and that they invited me back to do another concert,” she said without hesitation. “I find as my career my work continues, there’s the stuff I wanted to do — I wanted to dance on Broadway, for example, and I have — and then somebody says, ‘Would you do this for us, talk to these veteran soldiers, sing this for us?’ These are … I don’t have a word for it, they’re the surprise bits. My work is my work but this stuff is … it’s so powerful and has provided the most profound and moving and humbling experiences and I’m so deeply grateful.”

For Sidlin, the journey from that Minneapolis sidewalk has been transformative.

“I can never hear the Verdi without thinking of Rafael Schächter,” he said. “I wanted to make people see him as a hero of the Shoah and I want anyone who comes in contact with what we are doing to hear the Verdi Requiem and think of it in relation to the people in the chorus in Terezin.”

“Defiant Requiem: Verdi at Terezín” will be performed on Monday, March 9 at 7:30 p.m. at Avery Fisher Hall, Lincoln Center, with the Orchestra of Terezín Remembrance conducted by Murry Sidlin, the Collegiate Chorale, Bebe Neuwirth, John Rubinstein and a distinguished group of soloists. For information, go www.defiantrequiem.org or http://lc.lincolncenter.org.