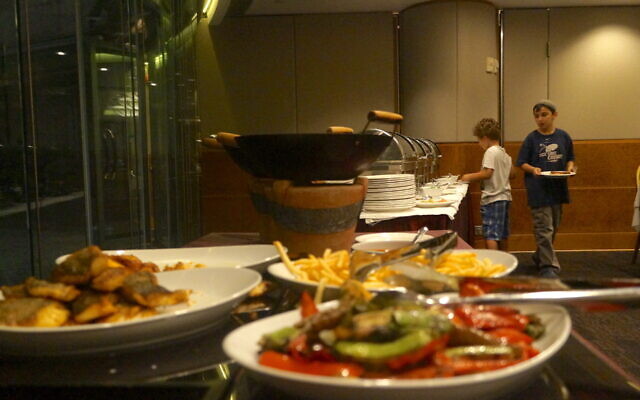 Above is an image of a "Kiddush," a custom once common in American synagogues consisting of several dishes from which guests serve themselves. (Sam Litvin/Flickr Commons)

Synagogues like mine are stumbling back into what they hoped would be the post-COVID era, with a combination of services held indoors, outdoors, on Zoom and beamed telepathically directly into our heads using a technology developed by the Rothschilds. (I may be wrong about that last one.)

The New York Times reported that Central Synagogue in Manhattan had rented out Radio City Music Hall for a grand return to live High Holiday services, but cut back to 30 percent capacity in the face of the Delta variant.

There’s an intense debate about the decisions being made by rabbis, and what is lost and gained as we enter a second set of High Holidays with restrictions on who can and can’t sit in the pews. People lament the loss of spiritual energy, the power of communal song, the deep need for human contact.

I support any policy that puts our health and safety first, even if that means delaying our return to the kind of synagogue experience people are longing for. As Jeffrey Cahn, the executive director of the “eclectic” Romemu congregation told The Times, “The rabbi may not like me saying that, but he would probably agree with me at the end of the day: Protection of life is always more important than any other commandment or ritual in Judaism.”

But I do find myself missing something essential to synagogue life, but seldom talked about: The people who really annoy me, despite my best efforts to be spiritual and generous.

You know who I mean: The guy who keeps correcting the Torah reader, even though there is a gabbai who is assigned to the job. The person who insists on saying “Amen” a beat or two after everyone else. The show-offs who like to harmonize with every song. (That would be me.)

A few years ago I began a list of the people in synagogue I love to complain about, and added contributions from readers. Here’s a sample:

In all seriousness, this is the kind of human comedy lost in all the talk about what COVID has done to our spiritual lives. Synagogue is never just about divine communion or reaching spiritual heights. It is about the hodgepodge of people who come together each week, to pray and study, yes, but also to eat, schmooze, laugh and kvetch. It’s about talking with someone you might not call a friend exactly but would miss if you didn’t see her in her usual seat. It’s about joking with and about your neighbors, pretty confident that everyone will get and appreciate the joke.

That’s my High Holiday prayer: That we’ll get back to normal and get right back to loving – and annoying – each other. That’s as good a definition of community as any.