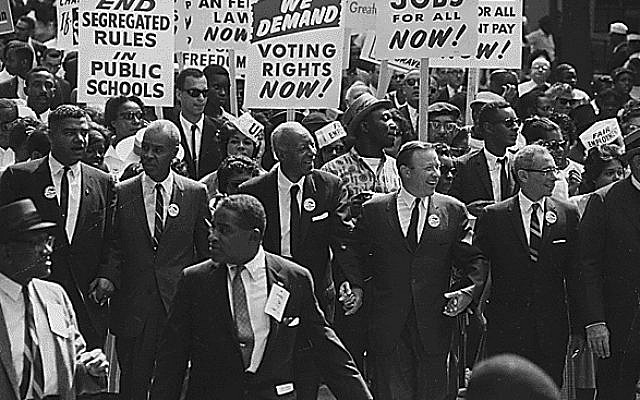 “We will not be satisfied until justice rolls down like water, and righteousness, like a mighty stream.” These are the words written on the steps near the tomb of Dr. Martin Luther King, Jr. I recently had the privilege of learning about the work of Dr. King and the other leaders of the Civil Rights Movement while on a week-long tour of the south. During this experience, I was able to visit several sites and museums centered around the issues of inequality and racism, their role in history and how they continue to plague our nation today. Through these experiences, I not only broadened my knowledge of our nation’s history and these important issues but was also called to action. This deep exposure has made me even more motivated to pursue justice.

At the beginning of our journey, we visited Montgomery, Alabama. While in this city, we visited the Legacy Museum of the Equal Justice Initiative, started by lawyer Bryan Stevenson. The museum focuses on America’s history of racial inequality and injustice, outlining the disturbing legacy of racial terrorism and senseless hatred. As visitors move towards the exit of the museum, they encounter a wall with panels of information about racial injustice in America today, specifically with regards to the prison system. These panels are accompanied by questions that ask visitors to consider how they can be a part of the pursuit of justice. Some of the questions required us to ponder why racial injustice and inequality prevail. Walking along this wall, I reflected on these questions. I felt empowered; I realized I could expand my role as a viewer and listener to an advocate, someone pursuing a course of action. These questions really framed my journey through the south, and I find myself grappling with them still.

During this experience, I also had the honor of speaking with and learning from a few individuals who were directly involved with the Civil Rights Movement. One of these individuals was a woman who had participated in Dr. King’s march across the Edmund Pettus Bridge in Selma, Alabama. When she met with us, she described the inequality and racial hatred she faced as a little girl growing up in Selma, adding that it was this injustice that motivated her to join the movement. She urged us to consider how injustice takes form today, stressing that the fight for equal rights is not over and must continue with our generation. “Right now, all lives do not matter. All lives should matter, though. That’s how it has to be, that’s your job,” she told us. Similar to the reflective questions in the museum, I felt moved and inspired by her words. Once again, I was reminded that my responsibility was not only to bear witness to these disturbing, infuriating parts of my country’s history, but also to use my education and passion to continue the fight for justice. With these thoughts in mind, I walked the Edmund Pettus Bridge with my peers, tracing the footsteps of the strong, courageous individuals who, like me, had felt motivated to march in pursuit of equality and justice.

On the last day of our trip, we visited the Civil Rights Institute in Atlanta, Georgia. The Institute allowed me to examine how the issues of injustice and inequality relate to our world today. The exhibits covered gender and economic inequality, violence and assault, terrorism of all forms, oppressive leadership and unjust imprisonment. Just before I exited the museum, I found myself in a room focused on the role of ignorance during the Civil Rights Movement. The room featured clips of respected political leaders who abused their positions of power to further racial hatred and justify violence and inequality. It was incredibly moving to see how pervasive such belligerence and ignorance was. The most horrifying realization, however, was that so many people turned a blind eye to such action and refused to fight back. I realized then that my first step in pursuing justice would be to continue my education. Education guards against ignorance, and therefore, against the dangerous forces of prejudice and hatred. By educating ourselves, we not only bear witness to the past, but we also refuse to let the past repeat itself. To continue learning is to acknowledge that there is still more to be done, and this experience helped me recognize that I have an obligation to be a part of the mission to create change. I will always be a learner, because I refuse to be satisfied with some equality, or some justice; justice means justice everywhere and for all.

I feel motivated to take action not only because I am an American citizen and a human being, but also because I am a Jew. The pursuit of justice is integral to the Jewish religion. Deuteronomy 16:20 reads, “justice, justice you shall pursue!” Even though many of the issues that plague our nation do not directly relate to us as Jews, we have an obligation to take action because of the principles that are so fundamental to our identity as a people. It is very important, now more than ever, that we each participate in the pursuit of justice. For me, this means continuing to educate myself. The power of education lies in how we apply it in our lives, and if we can use what we learn to advocate for the issues that we care about and to fight against ignorance, we may finally see the day where the mighty stream of justice and righteousness rolls infinitely with promise and peace.