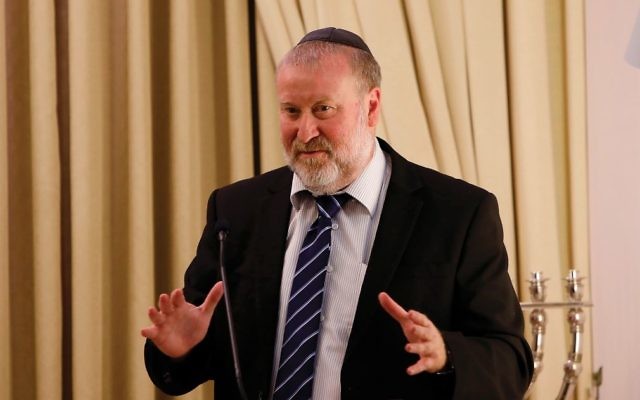 Too close for comfort? Attorney General Avichai Mandelblit had been a close aide to the prime minister, but now he sits in judgement. Getty Images

Then, in early 2016, he was selected to become Israel’s attorney general. But about six months after Mandelblit’s appointment, two major police investigations into corruption allegations surrounding the prime minister landed on his doorstep.

Now, Netanyahu’s political future and the government’s stability seemingly ride to a great degree on Mandelblit’s decision — turning the attorney general himself into a lightning rod for public debate.

One of the investigations — dubbed “Case 1000” — involves hundreds of thousands of shekels worth of expensive cigars and champagne allegedly gifted to the Netanyahus by wealthy business moguls like Israeli-American producer Arnon Milchen, raising suspicions of bribery.

The second police probe — dubbed “Case 2000” — involves an alleged offer by Netanyahu to promise tighter legal regulations on the right-wing free newspaper Israel Hayom in return for favorable coverage in Yediot Achronot, the largest paid circulation newspaper in the country.

A third investigation, in which Netanyahu is not a suspect, involves his personal lawyer and relative, David Shimron, and allegations that he helped secure a lucrative submarine contract for German manufacturer ThyssenKrupp for a generous fee despite a potential conflict of interest. 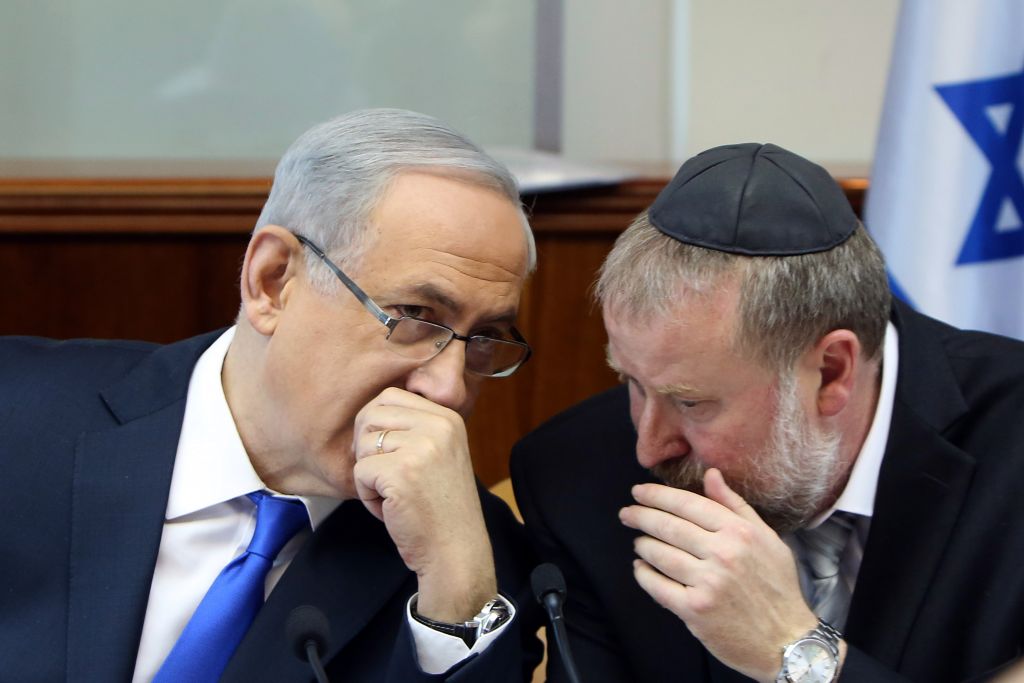 Netanyahu, for his part, has repeatedly denied allegations of wrongdoing. He has said the gifts that he accepted were part of a normal friendly relationship and that he never intended to make good on a deal he discussed to secure better media coverage. The prime minister has portrayed the entire investigation as part of a conspiracy by the media to pressure the legal system into an indictment, and thus topple his government.

Though the police haven’t completed their investigations, it appears that the case against the prime minister in the first two probes reently became more robust: in late July, legal officials signed a deal with Netanyahu’s former bureau chief, Ari Harrow, to become a state’s witness.

But when the police investigations are finished and the state prosecutor’s office has finished reviewing the cases, the decision whether to press charges will be up to Mandelblit. An indictment could trigger a wave of calls for Netanyahu’s resignation — even from the right.

For months, public pressure has been building on Mandelblit amid weekly Saturday evening demonstrations outside of his home in the Tel Aviv suburb of Petach Tikvah. Protest leaders fault the attorney general for dragging out the investigations and delaying a decision on whether or not to indict.

As the protests have persisted, the police have sought to restrict demonstrators from protesting close to his home. Last week, Israel’s Supreme Court limited the number of demonstrators to 500. Instead more than 1,000 showed up. 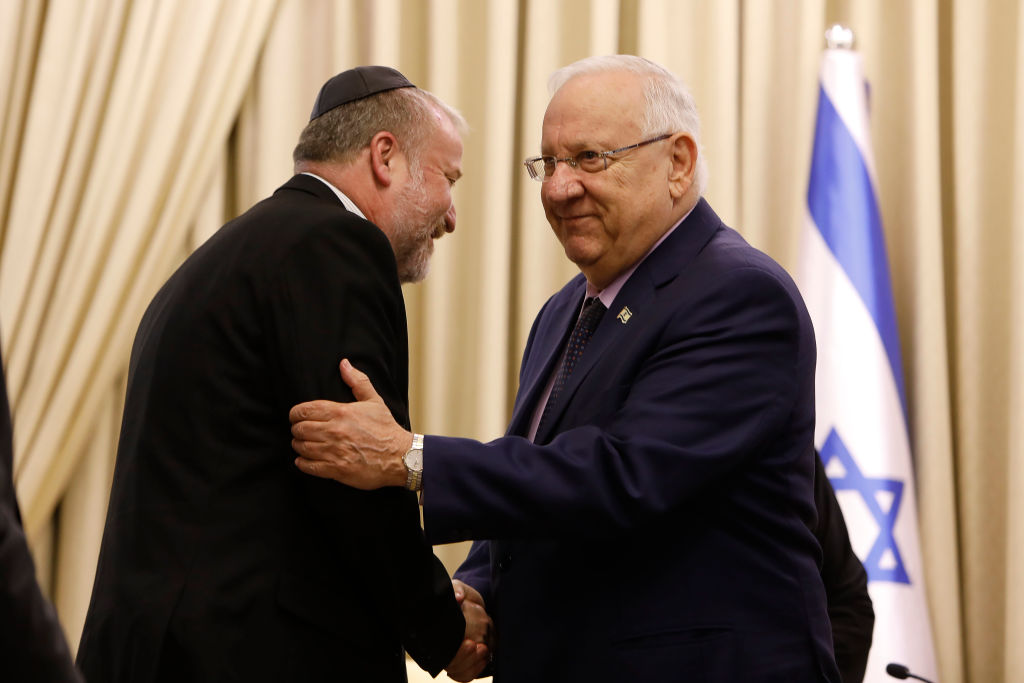 “People see him as professional, and he is considered a fair and decent person. He put himself into a problematic situation. There is a claim that he became close to Netanyahu — but now he’s supposed to be doing his job on behalf of the public,” she said. “Either way, at least half of the people will accuse him of having a conflict of interest. It’s a lose-lose situation.”

“This is the biggest struggle that we’ve seen in this country in recent years because it’s purely a struggle for democracy.”

At a recent demonstration, one demonstrator held a sign accusing the attorney general of a conflict of interest — “Mandelblit = rag,” a reference to someone who doesn’t have a backbone. Another placard asked, “Has he forgot what it means to be attorney general?” Evoking a common refrain from the 2011 social justice protests in Tel Aviv, demonstrators chanted “capital, governance — an [criminal] underworld.”

Eldad Yaniv, an activist lawyer who was held by police overnight following one of the demonstrations at Mandelblit’s home, told Israel’s public television news that the protests were not just about Netanyahu and alleged public corruption.

“This is the biggest struggle that we’ve seen in this country in recent years because it’s purely a struggle for democracy,” Yaniv said.

Mandelblit, whose parents were active in Menachem Begin’s pre-state underground, hails from Tel Aviv and rose through the ranks of the military’s prosecution department. In his 20s, he had a spiritual awakening and became ultra-Orthodox.

Despite the fact that he served as Netanyahu’s cabinet secretary — a key political appointment — for more than two years, Mandelblit demonstrated his independence as attorney general when he refused to defend the government’s law to legalize unauthorized settlement outposts in Israel’s Supreme Court.

Guy Lurie, a fellow the Israel Democracy Institute focusing on Israel’s legal institutions, said that Mandelblit’s direct jump from the highly politicized role of cabinet secretary to attorney general — a civil servant position considered to be the “gatekeeper” of Israel’s legal system — may have been too quick for him to shed the appearance of being a Netanyahu loyalist.

Despite that, Lurie said that he doesn’t believe that Mandelblit should have recused himself from involvement in the cases. He noted that there is an inherent tension between the Israeli attorney general’s dual roles as the state’s top prosecutor charged with upholding the public interest, and his role as a legal adviser to the Israeli government.

“We should give the attorney general the benefit of the doubt; he does seem like a sincere public servant who seems to have public integrity,” said Lurie. 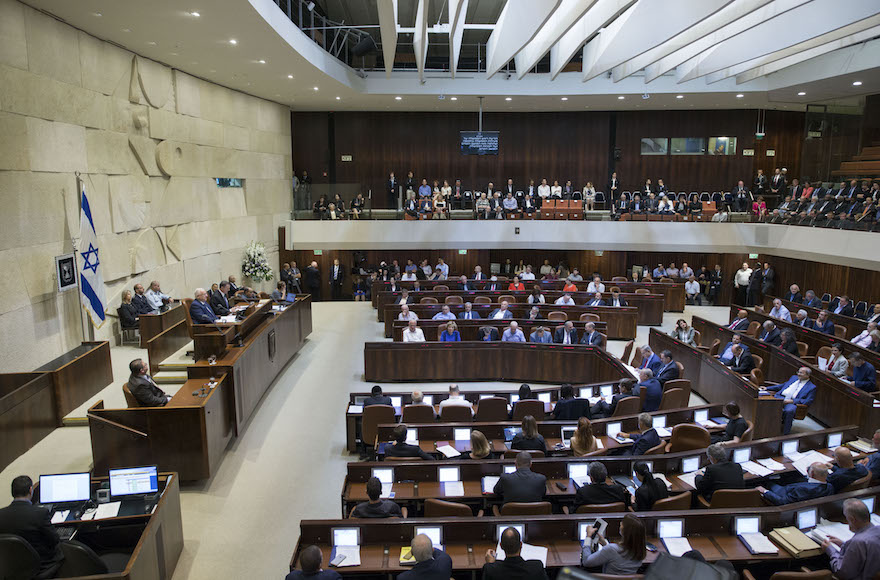 Yet Lurie noted that the concerns of foot dragging by Israeli legal authorities are also important considerations. “Timeliness is one of the main measures of success” of a prosecutor, he said. “Justice delayed is justice denied.”

Israeli legal authorities allowed corruption investigations against Defense Minister Avigdor Lieberman to remain open for years before deciding to close them. A probe into Netanyahu’s wife Sara’s use of public furniture at their private residence has also sat for more than a year without a decision.

“The main issue is to get him to make a decision one way or another. We are waiting too long.”

“I believe he’s not just playing for time — but on the other hand, the reason he is taking so long is that the threshold of evidence that he requires [to press charges] is probably higher,” said Barak Medina, a law professor at Hebrew University. “He believes that because [with] an indictment the prime minister will have to resign, we should be more careful.”

While the legal scholar said he respects Mandelblit’s ability to deliver an impartial decision on whether or not to indict, Medina added that the attorney general probably should have recused himself to avoid the appearance of a conflict of interest.

“Once the attorney general makes a decision, it will be subject to scrutiny,” both by Israel’s legal system and potentially the Supreme Court, said Medina. “The main issue is to get him to make a decision one way or another. We are waiting too long.”