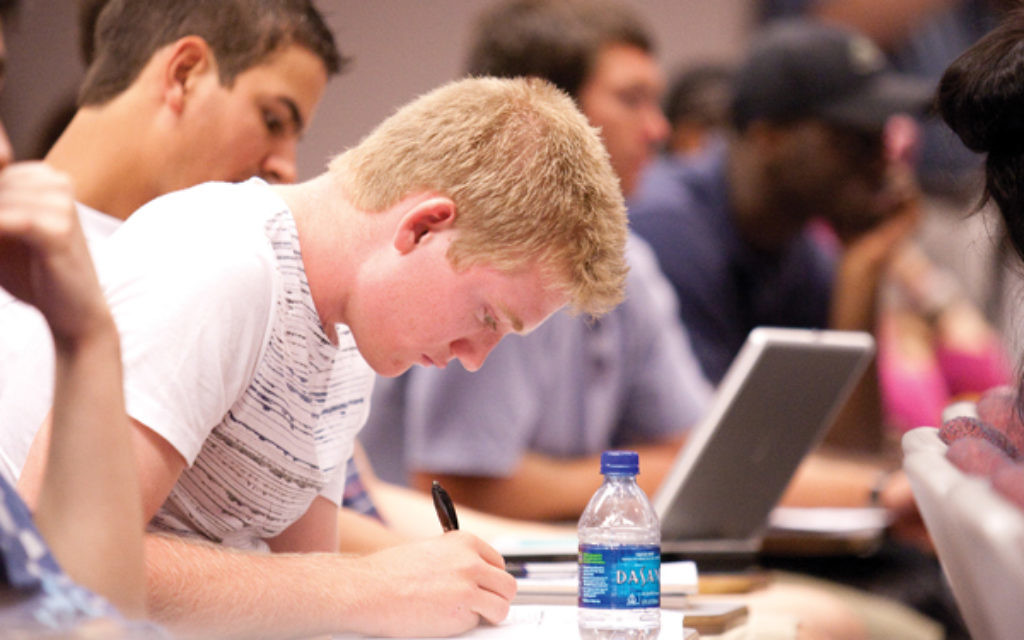 Houston — Administrators at Texas Christian University, an institution in Forth W orth affiliated with the Disciples of Christ denomination, needed some advice last year on starting a Jewish studies program, which is now in the planning stages. A small program that had begun under the auspices of the school’s Brite Divinity School offered only a few courses a year to prospective members of the clergy; TCU administrators wanted to establish a larger Jewish studies program for the entire university.

Instead of contacting the leaders of decades-old, better-known Jewish Studies programs like those of Columbia University or Ohio State University, they called Matthias Henze, founding director of The Program in Jewish Studies at Rice. That program was founded in 2009 at Rice University, a prestigious private institution in Houston.

Henze, who knew members of the TCU administration from earlier academic meetings, said they had reached out to him because they knew he had started the Rice program from scratch. “They wanted to know how I built the program,” says Henze, associate professor of the Hebrew Bible/Old Testament and holder of the Watt J. and Lilly G. Jackson Chair in Biblical Studies.

Ariel Feldman, a Moscow-born scholar who has lived in Israel and served on the TCU and Brite Divinity School faculty for three years, said his school approached Henze for two additional reasons: as someone familiar with working in Texas, Henze would be better attuned to the unique needs of an institution in the Southwest than someone heading a program in the Northeast or Midwest; and Henze, a Lutheran, might better understand a Christian institution.

A native of Germany who has served on the Rice faculty since 1997, Henze has a Master of Divinity in Protestant Theology degree from Germany’s University of Heidelberg, in addition to a Ph.D. from Harvard University in Near Eastern Languages and Civilizations.

“He was so successful,” Feldman said of Henze, whose program at Rice, according to Jewish leaders in Houston, has become a valued part of the city’s Jewish community.

First, it was a sign of the growing interest of universities — including those affiliated with a denomination of Christianity — in offering a Jewish studies program. Many schools see such programs as a way to attract Jewish students.

The number of universities in the U.S. and Canada that offer Jewish studies programs has grown extensively, from a handful in the 1980s, to about 170 today, said Rona Sheramy, executive director of the Association for Jewish Studies.

While most of the schools with such programs are nonsectarian, there are also a growing number of Christian universities offering them. Among those are Fairfield (Jesuit, in Connecticut), Earlham (Quaker, in Indiana), Loyola Marymount (Jesuit, in California), Graduate Theological Union (ecumenical Christian, California), Georgetown (Jesuit, in Washington, D.C.) and Boston College (Jesuit, in Massachusetts).

A Jewish studies program “marks a Jewish presence” on campus, Feldman told The Jewish Week in a telephone interview, adding that TCU has afforded him full independence to teach his introductory Judaism courses from a Jewish perspective, “with no religious [i.e., Evangelical Christian] agenda at all.”

“The name” — Christian — “is problematic” in influencing some Jews to consider the school as a place for matriculation, he conceded.

For some non-Jewish scholars who develop a specialty in a facet of Jewish studies, the interest is both personal and professional.

“My interest in Jewish studies arose following my work on Fascism for my doctoral degree at Harvard on film and art during the Spanish Civil War,” said filmmaker John Michalczyk, who serves as co-director of Boston College’s Jewish Studies program with Donald Fishman, a Jewish colleague.

“That [co-director] approach works well at Boston College where we have a Christian-Jewish Center with a Jesuit director and a Jewish associate director,” Fishman said.

Michalczyk said his interest in Jewish issues broadened when he prepared a paper on Holocaust film for an academic conference in 1980. “That led me to making documentary films on social issues, starting in 1991 on Christian anti-Semitism,” he said in an email interview. “Since then I have produced seven documentaries and published several books on Jewish themes and continue to teach Holocaust and genocide-related subjects.”

TCU’s contact with Henze also suggests that it is no longer automatic that the head of a Jewish studies program has to be Jewish.

Marie-Theresa Hernandez, chair of the University of Houston’s Jewish studies minor (uh.edu/class/mcl/jewish-studies), is Catholic. Director of UH’s undergraduate World Cultures & Literature program, she is an expert on crypto-Jews in colonial Mexico, author of a new book, “Virgin of Guadalupe and the Conversos: Uncovering Hidden Influences from Spain to Mexico” (Rutgers University Press), about the relationship between Jews and the Mexican Colonial Church.

Both Henze and Hernandez said they have received the full support of Houston Jewry and of the administration at their schools, neither of which have large numbers of Jewish students (an estimated 350 undergraduates at Rice, out of a total of 3,500; about 500 of 29,000 at UH). Both said they designed their interdisciplinary programs by bringing together extant courses and faculty members from a wide range of university departments, like English, history, art and classical languages.

The courses offered by both schools’ undergraduate Jewish studies programs are a combination of the generic (Introduction to Judaism, History of Jewish Civilization, The Bible and Its Interpreters), and the idiosyncratic of Bible Belt venues with large Hispanic population (Jesus in the Jewish Imagination, Expulsion and Aftermath: 1492 and After, The Sephardic Jews and their Diaspora: A Contribution to Hispanic Culture).

“The two programs have added tremendously to Houston’s Jewish life, particularly in terms of higher level Jewish study,” said Rabbi Kenneth Weiss, director of Houston Hillel. “Faculty from both programs have made it a point to teach in the Houston Jewish community — at Yom Limmud, special classes at the JCC and through Rice University’s School of Continuing Studies.”

“I think Rice in particular — like similar universities — is seeking to recruit more Jewish students and there were some individuals very passionate about launching a bonafide Jewish studies program,” said Lee Wunsch, CEO of the Jewish Federation of Greater Houston.

“I knew they had a Jewish Studies program [at Rice] because I wanted to study Hebrew in college … so knowing Rice offered Hebrew did slightly influence my decision” to attend the school, sophomore Jeremy Reiskind, who took Hebrew 101 last year, told The Jewish Week in an email interview.

The apparent anomaly of the only two major Jewish studies programs in a major U.S. city being headed by people who lack Jewish roots shows the maturity of the field, from sometimes-provincial departments that were an extension of their local Jewish community, to independent academic divisions where a scholar’s ethnic background is less important than his or her academic qualifications, observers said.

In Houston, no one seems to care who’s in charge of the programs.

“It never comes up,” Henze said. “The religion of the programs’ leaders is a non-issue,” Rabbi Weiss said, echoing the Jewish Federation’s Wunsch. The Jewish Herald-Voice’s stories on the establishment of the two programs did not mention the leaders’ religious background.

In contrast, the issue of a Jewish studies program leader’s qualifications became a matter of controversy at Queens College in 1996.

The appointment of Thomas Bird, a professor of Russian literature, to head the school’s Center for Jewish Studies, was opposed by sociology professor Samuel Heilman, a founder of the interdisciplinary program and one of its former directors. Bird is Catholic.

“That’s like making me the head of the black studies program,” Heilman was quoted by The Jewish Week as saying. “Couldn’t they find a nice Jewish scholar?” an unnamed City University official suggested to The Jewish Week.

Heilman opposed Bird’s appointment for academic, not religious reasons, he tells the Jewish Week; Bird did not have a Ph.D., normally a prerequisite for the head of such a university department.

“The fact that I noted that he was not Jewish was an afterthought,” Heilman said in a recent email interview. “At the time of the Bird affair, in fact a non-Jew of significant academic accomplishment, Dr. Ernest Frerichs headed the Brown University Jewish Studies program and I had no objection to it.

“The key question is academic rather than religious, racial or ethnic criteria,” Heilman said.

Bird, who has taught Yiddish at Queens College and served as assistant director of Yiddish studies, still serves on the school’s faculty and is a Ph.D. candidate at Princeton University.

The Association for Jewish Studies does not keep track of the religious affiliation of the heads of its member Jewish studies programs in the United States and Canada; nearly all are known to be headed by Jewish scholars, said Rona Sheramy, the association’s executive director.

But, if Houston is a reliable indicator, the number of non-Jews founding and leading such programs is likely to increase, Sheramy said. She pointed out that a growing number of non-Jewish scholars today are concentrating in academic areas that once were largely confined to Jews.

Another example is Peter Schafer, a non-Jewish German scholar who recently was named the head of Berlin’s Jewish Museum. He previously served as director of Princeton University’s Judaic Studies program.

Sheramy said Rice and UH are signs that in Jewish studies, as in other collegiate departments, the only factor that affects the choice of a department’s leader will be a candidate’s academic background, not his or her ethnicity.

Sheramy called this “the increasing mainstreaming of Jewish studies. It’s a sign of the health of the field.”