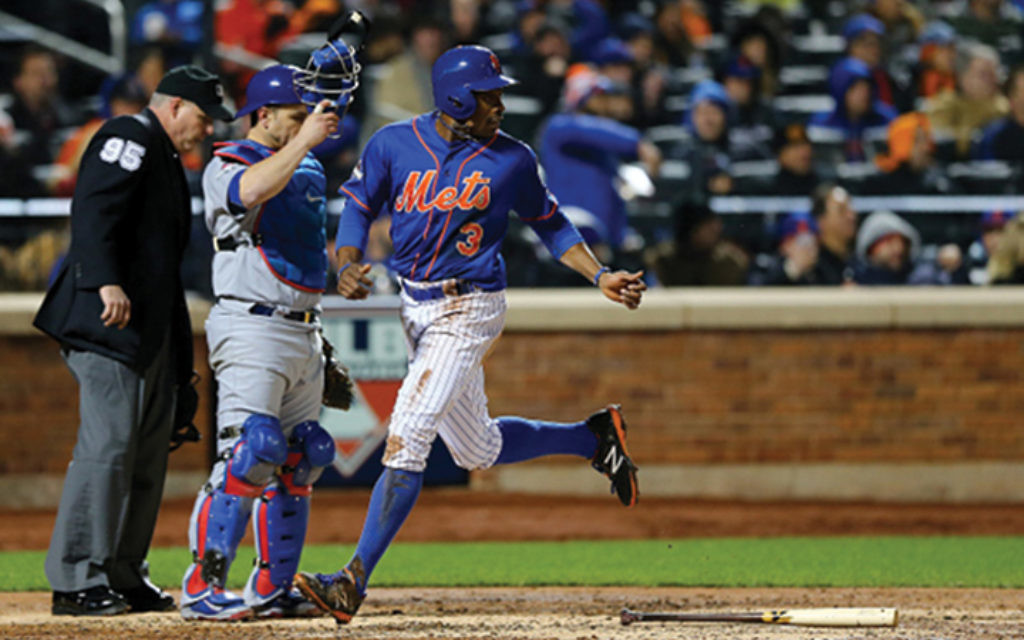 We are the quirky minority, a small segment of the overall population, trying hard to fit into the national landscape. We are overshadowed by the majority surrounding us, only able to come out of the shadows when things are particularly good. Even at those times we are ridiculed, without a retort except the knowledge that our day will come. We remember our past periods of glory, and pray every day for the next one to come speedily.

It’s not easy being a Mets fan.

Especially here, where a certain Bronx outfit, winners of 27 World Series, home to legendary players like Ruth and DiMaggio and Mantle, have a pre-existing claim on the media and most baseball fans’ allegiance. The Yankees are cool, corporate; the Mets, scrappy, salt of the earth.

For a Mets fan, the Yankees are cruel oppressors. Their four dynasties — in the ’30s, ’50s, ’70s and ’90s — match the four empires (Babylon, Greece, Persia and Rome) that ruled over Jews through the centuries. And what’s more Jewish right now than the fact that Mets have Jewish owners, the Wilpons?

To paraphrase Lenny Bruce: The Mets are Jewish, the Yankees, goyish.

To be a Mets fan here is automatically, statistically, to be an outlier. Which comes naturally to many Jews.

But if baseball is the national pastime, the sport with the greatest attraction to Jews, being a Mets fan, then, is particularly Jewish. Particularly now, with the Mets in the National League Championship Series, a step away from the World Series.

I’ve always equated being a Mets fan with being Jewish. I remember this most vividly from a birthday party in 1999, when I turned 10. Before blowing out the candles, I asked my mom if I could have two wishes, since I was turning double digits; she obliged. Even at my young age, I had a sense of history: I wished that the Messiah should come that year, but that the Mets should win the World Series first. (I specified that sequence, in case the Messiah’s arrival would impact the season.)

When the Mets reached the World Series the next year, I was overjoyed; one of my wishes was in sight. They lost, though, to the Yankees, during that team’s late-’90, early-2000s dynasty. I learned that I shouldn’t expect too much, a good lesson for a Jew.

To cheer for the Mets is to have faith. I bought tickets to the playoffs this year before the team even clinched a spot. Would they get there? Who knew? They have a talent-laden roster, but we have known other false messiahs.

I remember going to my first Subway Series game, at Yankee Stadium, wearing a conspicuous Mets uniform and hat. I was a glutton for punishment and, of course, I got jeered. What Jew who is conspicuously Jewish, with kipa or black hat, hasn’t had a similar experience? I laughed it off. You know, Jews and humor.

Speaking of which: Comedians, it seems, according to a recent piece in the Wall Street Journal, are drawn to the Mets because they must learn to laugh at themselves and their own failures in order to pull a crowd. Being a Mets fan requires the same sense of humor, the ability to laugh at oneself, at one’s team and, of course, at one’s misfortune. Call it dark humor.

My Mets faith and the suffering that goes with it got more complicated (and gained some perspective) in college when I got to know people from Chicago. While both teams had not won the World Series in our lifetimes (Teddy Roosevelt was president when the Cubs last won it, in 1908; the Mets last won in 1986), there is a mystical aura of losing around the Cubs. Young Mets fans may be praying for their first championship, but Cubs fans can pray alongside their parents and grandparents for the baseball messiah who never comes.

On some level, the two teams have created rosters that suit their specific woes. The Cubs need that boost, that pop, that will take them to the baseball heights; their young power hitters personify that attempt. The Mets, meanwhile, crave consistency to guard against falling apart — that’s what a Mets fan expects, after all; this year they are armed with great young pitchers capable of consistency over nine innings.

The Talmudic commentaries envision the coming of the messianic age. Some see it as bursting forth as the Temple falls from heaven, while others see a benevolent government taking control and ushering in a better world.

In which way will baseball’s version of the messianic age actually come? Suddenly, like a 450-foot Kyle Schwarber home run, or gradually, like a methodical Matt Harvey complete game shutout?

We’ll find out soon. Will the Second City be first, and end 107 years of suffering? Or will the Mets grant that first birthday wish of mine?

And if not this year, wait till next year.

To a Jew, that waiting stuff sounds very familiar.