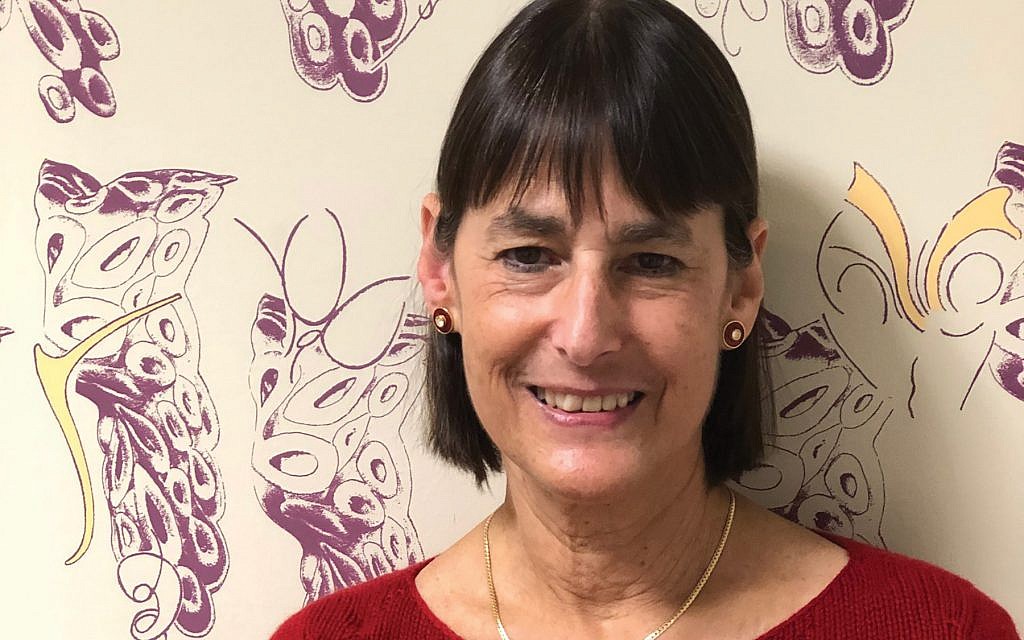 One of the many highlights in The Jewish Museum’s new exhibition of Chanukah lamps is a series of eight iron lamps whose forms are energetic and joyful, as if iron could dance. Artist Larry Kagan created them in the 1980s from welded steel scraps salvaged from his workshop and the street, riffing on the traditional form. Their shadow play creates new light, and they are meant to be more inventive than functional. These lamps, each titled “Menorah Memories,” have never been shown before.

Senior curator Susan L. Braunstein selected these Chanukah lamps and the others in the luminous new show, “Accumulations: Hanukkah Lamps,” from the more than 1,050 lamps in the museum’s collection, which is the largest collection in the world. For several decades, Braunstein has worked with the collection and has organized six previous exhibitions and edited catalogues. She may be the world’s expert on this example of Jewish ritual art, which goes back to the first century, when the custom of kindling lights on the holiday was first recorded.

Now, after 38 years, Braunstein is stepping down. While her curatorial work has extended far beyond these lamps, it is through them that she had occasion to meet two presidents of the United States. For the White House Chanukah parties of the George W. Bush and Barack Obama administrations, she traveled to Washington, bringing menorahs that had been selected for lighting at their receptions. The Bushes chose a classic silver version, cast and engraved in Lemberg around 1867, with buds and flowers decorating the arms, lions supporting the base and eagle finials at the top. In 2001, it was the first Chanukah lamp kindled by an American president at the White House.

Salo Rawet’s “In Search of Miracles” menorah is part of the “Accumulations: Hanukkah Lamps” show.

In 2011, the Obamas selected one related to the military, in keeping with their Chanukah party theme of honoring those who have sacrificed for our country and those serving away from home on the holiday. (The West Point Jewish Chapel Choir performed.) The copper alloy menorah was made in 1945 in a displaced person’s camp and dedicated to General Joseph T. McNarney, who served as commander-in-chief of the U.S. Forces in Europe from 1945 to 1947. In Braunstein’s office at the museum, she has photographs from the White House events, with the petite curator flanked by the tall presidents and their wives.

Claudia Gould, Helen Goldsmith Menschel Director of the Jewish Museum, said, “Over the past 38 years, Susan Braunstein has played a leading role in overseeing The Jewish Museum’s Judaica collections, acquiring and working with contemporary artists to commission important works for the collection, and guiding the display of Judaica in the museum’s collection and temporary exhibitions. While trained as an archaeologist, Susan’s passion for research led her to develop expertise and a love for Judaica, ultimately becoming an internationally respected Judaica curator.”

We can open up the world the object represents — where it comes from, how it was used, its meaning in society.

In an interview, Braunstein explains that she fell in love with archaeology as an undergraduate, and after college she spent a summer in Israel working on an excavation. When she returned to New York, she volunteered at the Brooklyn Museum, in the Egyptian department, and that stint turned into a job as assistant to the curator. In 1980, she was recruited to The Jewish Museum to work on the exhibition “Israel in Antiquity,” among other things, while continuing her doctoral studies. Thus began her immersion in the museum’s collection. She credits curator emerita Vivian Mann for her training.

“I love working with objects. That comes from archaeology. We can open up the world the object represents — where it comes from, how it was used, its meaning in society. That unpacking of meaning is the thing I find most exciting,” she says. Braunstein, who speaks Spanish, Russian, French, Hebrew, German and Latin (and, using a Russian-Ukrainian dictionary, read a book in Ukrainian about metalwork relating to the lamps), is self-taught in Judaica, and found the studying a joy. 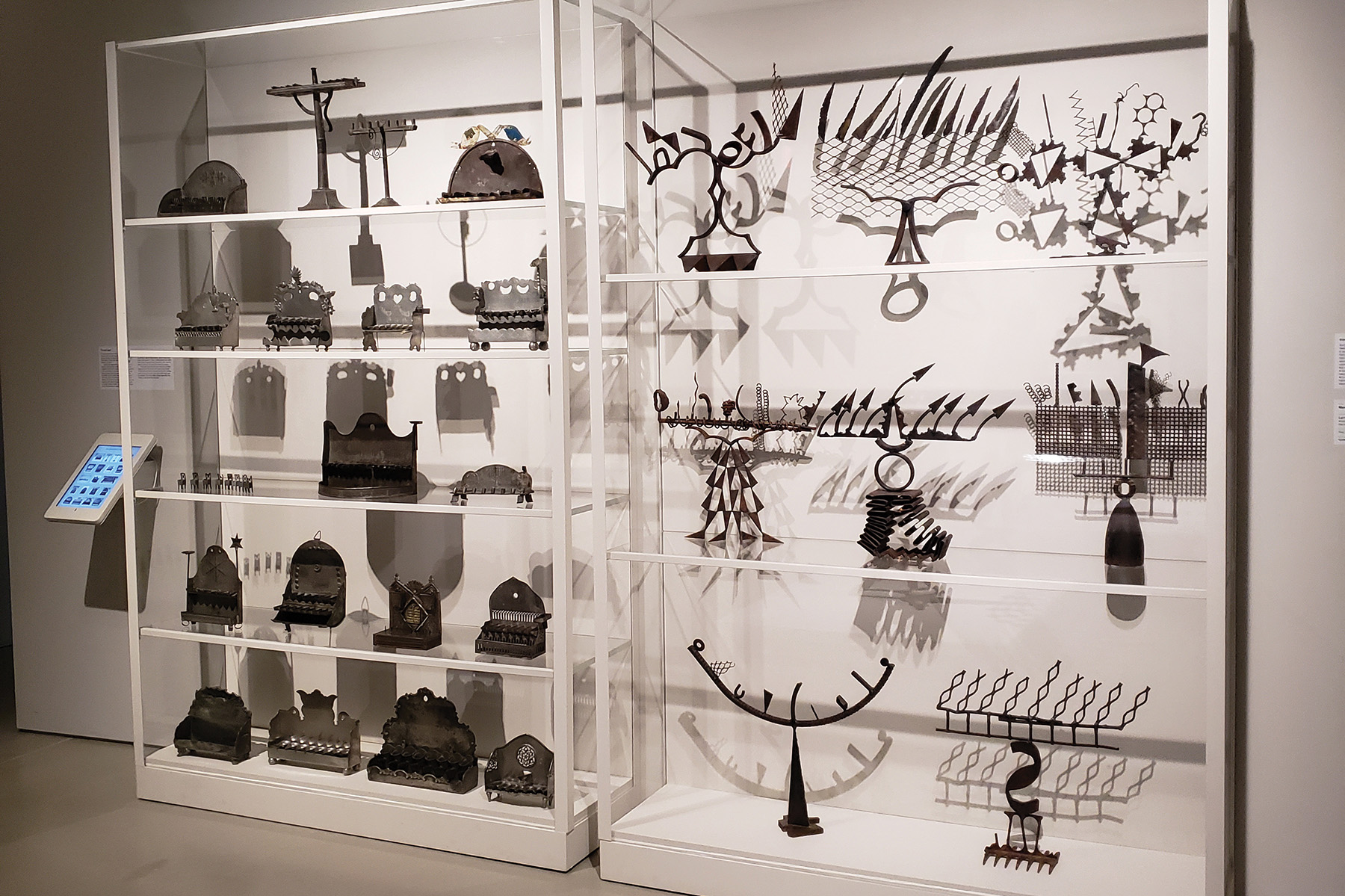 Reflecting on the many Chanukah lamps she has handled at the museum, she says, “One of the things I have regretted is that I have a sense of these things as living and having been used. When they come to the museum, they are not supposed to be lit. We appreciate them in many ways — as stories about people’s lives, as art, as memory.” The loans to presidents are rare exceptions to the no-lighting policy.

While previous exhibitions of the lamps have been organized by iconography, region and era, this latest show is organized by material. Braunstein followed the rabbinic dictum of what lamps can be made of, in order to fulfill the commandment of lighting in as beautiful a way as possible, according to what one can afford. The rabbis specified materials ranging from the most expensive, gold and silver, to simple materials like acorns, walnut shells and pomegranate peels. Here, in separate sections, the materials are silver, copper (and its alloys of bronze and brass), steel, tin and lead, and one final case of lamps made of glass, wood, clay and several materials the rabbis didn’t consider, like aluminum, concrete and silicon.

When they come to the museum, they are not supposed to be lit. We appreciate them in many ways — as stories about people’s lives, as art, as memory.

The more than 80 menorahs come from four continents, over six centuries, and are boldly displayed in rows in glass cases. Guiding a visitor through the exhibit, Braunstein points out that each has a story, and she has arranged them on shelves with interesting juxtapositions, whether similarities in form or technique. In the silver section, most are from Germany, Poland and the Russian empire. One was made at the Bezalel school in Jerusalem, with intricate silver patterns, with two lions guarding a menorah, and two priests holding torches behind them. With Yemenite filigree work, the inscription reads, “These lights are holy.”

In the tin and lead section, several seem to be modeled after inkwells, and the maker’s marks indicate that most are made by non-Jews for Jewish families. Lamps made of pewter, an alloy of tin, seem to have been popular wedding gifts in the 18th and early 19th centuries, in southern Germany. One is inscribed to a couple with their names, and other names, perhaps of the next generation of owners, appear on the side. Another has two rows of lights, so perhaps multiple family members would light a single lamp. A lamp in the form of a row of movable tiny chairs, made of lead, may have been melted down after the holiday to be recast the next year. 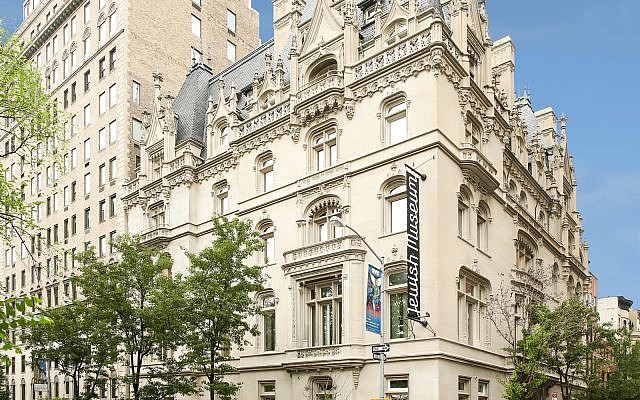 The Jewish Museum in NYC’s Upper East Side. via thejewishmuseum.org

In other sections, there’s a wooden lamp made in the Theresienstadt ghetto camp, one with unusual mirrored glass from the Frankfurt ghetto in 1757 and Anika Smulovitz’s “Light in the Darkness,” made in 2009 of charred wood with glass elements. Salo Rawet’s conceptual 1995 piece, “In Search of Miracles,” features 60 test tubes filled with oil and wicks, contrasting the miracles of medicine with spiritual miracles, extending hope beyond the eight days of the holiday.

Braunstein, the longest-tenured staff member, was also the overseeing curator on the show that opened last year, “Scenes from the Collection,” revamping the permanent collection on view. She has also worked on commissioning artwork (including several Chanukah lamps), traveled to Chile to examine a private collection and select items for display, and assisted the FBI on an art-related sting operation. In her retirement, she’ll continue her work on the collection once a week, and otherwise hopes to re-immerse herself in antiquities. She looks forward to spending time out-of-doors and especially bird watching — she enjoys the process of identifying and classifying, in nature too.

And on Chanukah this year in her Brooklyn Heights home, as in past years, she will kindle a menorah made from Jerusalem stone in a simple design that she selected from the museum shop. “I waited to find one,” she says, “that really spoke to me.”