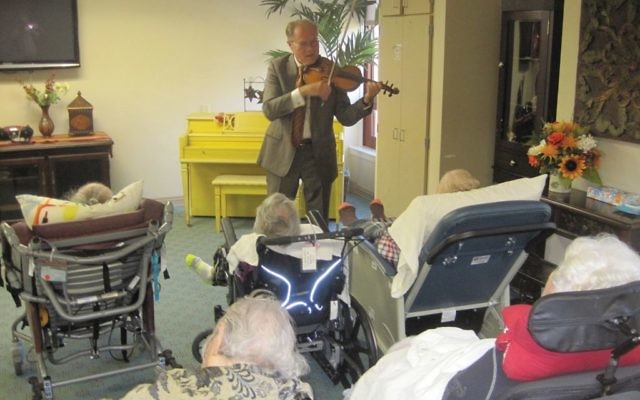 Cantor Vadim Tunitsky brings his violin and operatic voice to the infirm and home-bound in Houston, under the auspices of the local Jewish Family Service. STEVE LIPMAN/JW

Bikur Cholim With A Musical Touch

A few 80-something women are sitting one recent morning in a corner of the Seven Acres campus for Jewish seniors in Houston when a gray-haired man with a knit kipa on his head and a violin in his hand steps up.

The women would love to hear some music.

Tunitsky, a 65-year-old native of Ukraine who has voice and violin training in his homeland, and cantorial investiture from Hebrew Union College, starts playing. Some Jewish favorites, some classical music, Then he sings a little, in Hebrew and Yiddish. Soon, the women, and some bypassing residents, are singing and swinging along.

For 40 hours a week, Cantor Tunitsky, who has worked for several synagogues in the Houston area, visits — and entertains — hundreds of seniors, and younger special needs people, as part of “The Music and Spirit Program,” which he started a year ago under the auspices of the local Jewish Family Service (jfshouston.org).

At seniors’ residences, assisted living facilities and nursing homes, and at the homes of the home-bound or those recovering from an illness, he
forms for grateful men and women, prays with them, and spends time talking with them and holding their hands, shmoozing in English and Russian. Sometimes, he plays the piano too.

He says he designed his program, billed as the first-such, full-time, personalized “spiritual support and healing” outreach activity sponsored by a JFS in the United States (#MusicSoothestheSoul), to improve participants’ physical and emotional health.

Many studies have shown the therapeutic value of both music, and of interaction with other people. “You’re building relationships,” Cantor Tunitsky says.

Some of the people he visits have Alzheimer’s disease, usually uncommunicative because of their dementia; the cantor has seen them sharing in the familiar melodies.

Many of the people he sees are isolated, socially if not physically. “This is their connection with Judaism.”

The cantor says he started the program at the suggestion of Rabbi Scott Hausman-Weiss, now spiritual leader of Houston’s Congregation Shma Koleinu.

“I always sensed that I possessed a healing power,” he writes in his autobiography, “The Strings of My Soul.”

To supplement his credentials, the cantor is studying for rabbinic ordination through an off-campus program offered by the non-denominational Mesifta Adath Wolkowisk Rabbinical Academy, based in Flushing, Queens.

The cantor calls his work more than standard bikur cholim, the mitzvah of visiting the sick, and more than traditional chaplaincy. “It’s a completely different program,” an outgrowth of the visits he had earlier made while serving as a synagogue-based chazzan.

Linda Burger, JFS’ executive director, calls the program “a central part” of the agency’s work with the elderly.

“Our residents love musical programming,” says Annette Betz, executive director of The Medallion, the assisted living residence of Seven Acres. “They always look forward to him being here.”

The Hebrew University of Jerusalem has launched a marijuana research center in a bid to take a leading role in the burgeoning field.

The Multidisciplinary Center on Cannabinoid Research, announced in April, will be staffed by leading scientists and doctors, including the Israeli chemistry professor considered the father of cannabis research. It will conduct and coordinate research on cannabis and its biological effects with an eye toward commercial applications.

Medical marijuana has been legal in Israel since the early 1990s. Coaster420/Wikimedia Commons

“There is so much interest in cannabis at the moment, but a lot remains unknown about its mechanism of action,” Dr. Joseph Tam, the director of the center, told JTA. “My belief is that our multidisciplinary center will lead global research and answer these questions.”

Tam said that no other center in the world has such a broad approach to cannabis research, encompassing agriculture, chemistry, drug delivery, pharmacology and chemical development.

In addition to bringing together the 27 cannabis researchers at Hebrew University and its affiliated Hadassah Medical Center, the center will draw on other specialists on campus, including in the fields of nanotechnology and pain and brain science. There are plans to collaborate with scientists and biotech companies around the world.

Last month, ahead of its official opening, the center funded research projects on the use of the chemical compounds in cannabis, called cannabinoids, on traumatic brain injury, the cancer-fighting potential of a cannabinoid receptor and the effect of a cannabis extract on pain and painkillers. It also signed a memorandum of understanding with The Lambert Initiative, a medical cannabis research center at the University of Sydney in Australia.

Israel is known as a pioneer in cannabis research, which was long hindered worldwide by drug laws and social taboo. Raphael Mechoulam kick-started the field in 1964, when he discovered tetrahydrocannabinol, or THC, the main psychoactive constituent of cannabis. He went on to identify the endocannabinoid system upon which cannabinoids act on the body. At 86, he continues his research at Hebrew University and is part of the center.

“It has been shown that modulating endocannabinoid activity has therapeutic potential in a large number of human diseases, hence research on cannabinoids may lead to very significant advances, not only in basic science but also in therapeutics,” Mechoulam said. “Our Multidisciplinary Center addresses many aspects in this promising area, such as cancer, head injury, addiction, bone formation, obesity and others.”

Israel remains a leader in cannabis research, much of it centered at Hebrew University. According to Tam, that is thanks in part to an increasingly friendly political environment. Last summer, the government approved a plan by Health Minister Yaakov Litzman to relax some requirements for obtaining medical cannabis. In January, the Agriculture and Health ministries allocated 8 million shekels, or about $2 million, to fund research on medical cannabis growth, biochemistry and medicine.

In February, cabinet ministers backed legislation to decriminalize recreational marijuana use. But that will not affect Mechoulam’s work; he famously claims never to have smoked a joint. 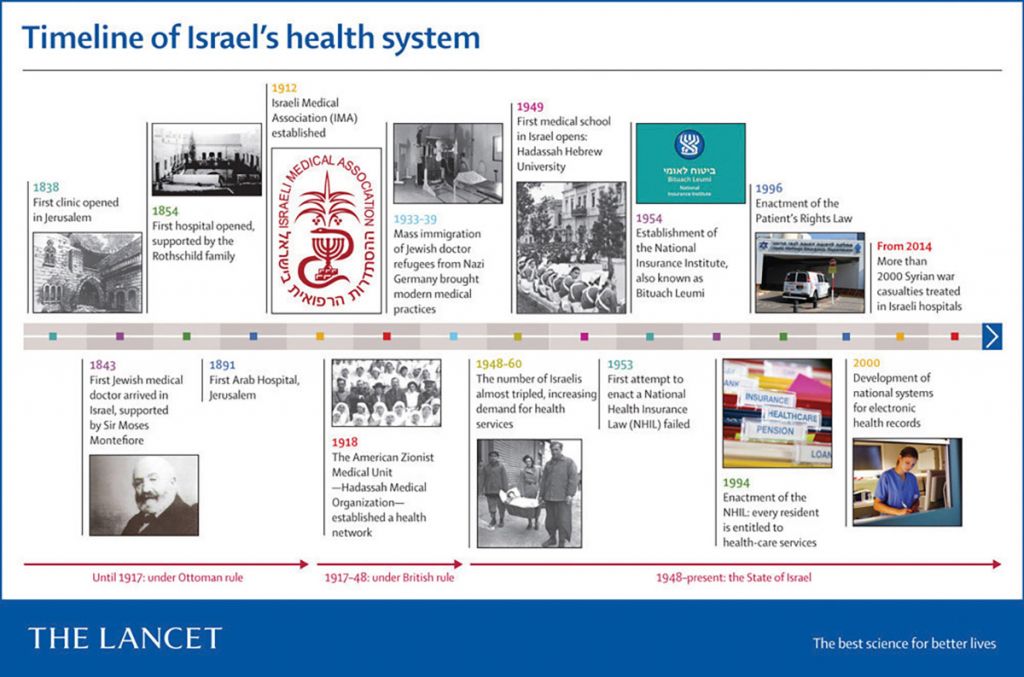 “Health in Israel” is the theme of a recent issue of The Lancet, England’s prestigious medical journal.

(JTA) – The British medical journal The Lancet published a special issue on Israel three years after publishing an open letter that accused Israel of committing war crimes in Gaza.

The special issue, titled “Health in Israel: Progress and Challenges in a Region of Conflict,” was unveiled last month in Tel Aviv. It was guest edited by A. Mark Clarfield of Ben-Gurion University of the Negev and also staffed by Orly Manor of the Israel National Institute for Health Policy and Services Research and Zaher Azzam of the Rambam Health Care Campus.

The issue is part of The Lancet’s series of country analyses investigating progress toward universal health coverage, and explores the unique aspects of health and health care delivery in Israel. The papers, authored by academics and policymakers in Israel, offer constructive recommendations for strengthening the country’s health care system, improving health and addressing health inequalities in Israel.

In the August 2014 issue of The Lancet, “An open letter for the people of Gaza” accused Israel of a “massacre” in Gaza during the war between Israel and Hamas, as well as “cruel” and “vicious war crimes.” Physicians, researchers and Israeli officials decried the letter, which was signed by several dozen Western doctors.

Dr. Richard Horton, editor-in-chief of The Lancet, visited Israel that October and then wrote in an editorial that he regretted publishing the letter and said, “This schism helped no-one and I certainly regret that result. I have seen for myself that what was written in the Manduca et al letter does not describe the full reality.” He announced in that editorial that he would devote an issue to health care in Israel.

Horton said in a statement, “This series was conceived in the aftermath of a tragic conflict in 2014 between Israel and Gaza, and following publication of a letter that divided world medical opinion about that conflict. Through the generous and courageous outreach of the authors of this series, we have sought to show that medicine and science can be a bridge to a better understanding of complex and seemingly intractable geopolitical challenges. Our future commitment is to work intensively with both our Palestinian and Israeli colleagues to provide the foundations in one aspect of society for peace and justice.”

In the wake of the Gaza letter, the journal issued new guidelines to deal with “submissions that lie at the difficult intersection of medicine and politics.”