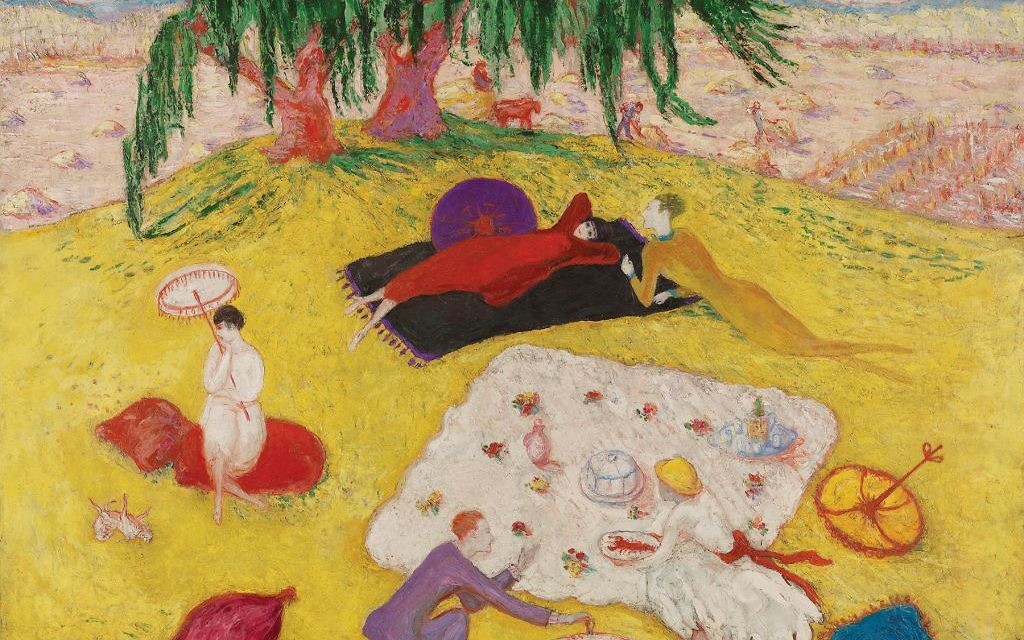 A summer idyll: Stettheimer’s “Picnic at Bedford Hills.” Courtesy of The Jewish Museum

In these still-long summer days when news reports are repeatedly gloomy, enjoy an interlude with the gloriously colored paintings of Florine Stettheimer at The Jewish Museum. Her style includes few shadows and her sensibility is modern and distinctive, conveyed with wit, exuberance and sophistication. Stettheimer’s love of family, her home, New York City and this country are evident in her work, and viewers will enjoy teasing out meaning as they are drawn to her story.

There are still several weeks to see “Florine Stettheimer: Painting Poetry” at The Jewish Museum. The work ranges from the artist’s first drawing done in 1887 at age 16 to paintings from the 1930s, with light-filled scenes at outdoor picnics or seaside towns, more people-scapes than landscapes. The exhibition closes on Sept. 24.

On the afternoon I visited I overheard a docent tell a group that Stettheimer would have been at home in the former Warburg mansion that houses The Jewish Museum. The artist was the descendent of wealthy German-Jewish banking families on both sides, and when her niece Jean Stettheimer married the son of Felix Warburg in 1926, their wedding was written up in The New York Times.

The fourth of five children, Florine was born in upstate Rochester in 1871, and the family traveled frequently to Europe; she was educated primarily in Berlin and Stuttgart and took private drawing lessons as a young child. When her father, a banker, deserted the family, it managed to keep up a cultured lifestyle thanks to her mother’s fortune. While Florine’s oldest sister and only brother married, she and her other two sisters — one older, one younger — remained single and created a vibrant household with their mother. Florine studied art in Munich, Vienna and Paris, and also wrote poetry. Her sister Caroline, known as Carrie, managed the family’s affairs and Henrietta, known as Ettie, studied philosophy and went on to write novels (under the name Henrie Waste). 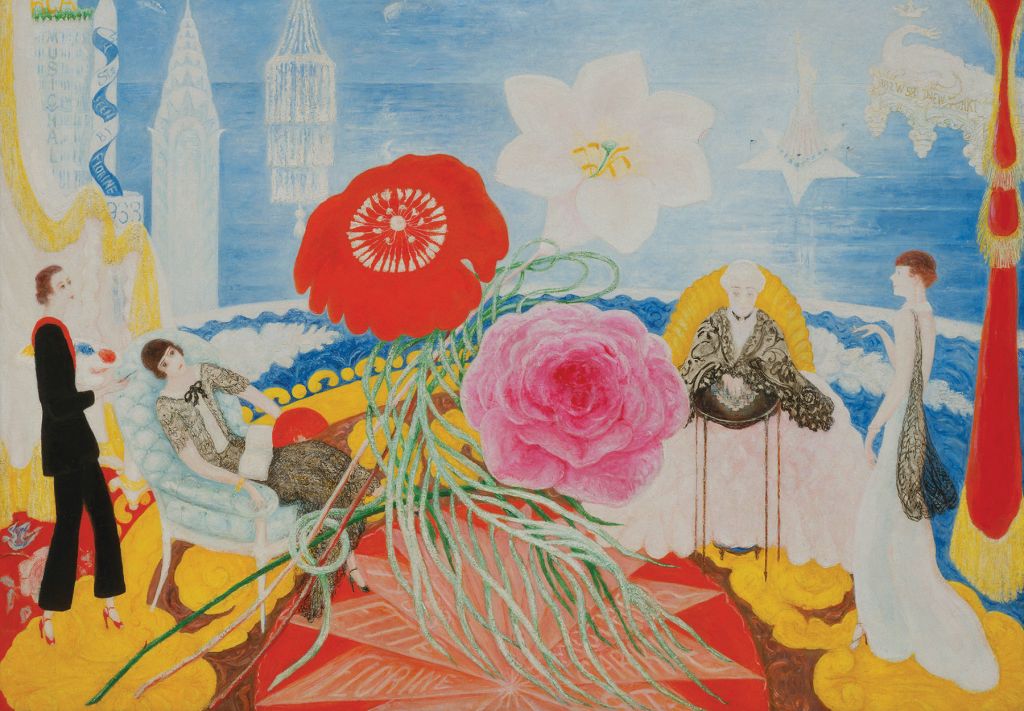 “Family Portrait II,” with icons like the Chrysler Building and the Statue of Liberty in the background. Courtesy of The Jewish Museum

In 1914, after the outbreak of World War I, they moved back to New York, into a 14-room apartment in Alwyn Court, a regal building still standing on West 58th Street. Florine had her first and probably only one-woman art show during her lifetime at the Knoedler Gallery, and it turned out to be a disappointment, as there were neither sales nor press attention. After that, she would introduce new works of art at the salons that she hosted along with her mother and two sisters in their home and in her studio in the Beaux-Art Building on West 40th Street, overlooking Bryant Park. Among their frequent and influential guests were other artists, photographers, art critics and friends, including Marcel Duchamp, Alfred Stieglitz, Georgia O’Keefe and Elie Nadelman; her friends not only commented on her work, but also often appeared in her paintings.

Upon entering the exhibition at The Jewish Museum, viewers first encounter the large and dazzling oil painting, “Family Portrait II” (1933), featuring the elegant foursome: the mother playing cards at a small table, Ettie lounging in a chair with a book, Carrie standing with a cigarette dangling from her hand and Florine holding a palette with the summery colors of the painting. She brings her presence powerfully to the work. The women’s names appear as a rug on the floor. In the background are New York icons like the Chrysler Building, Cleopatra’s Needle and the Statue of Liberty, and dominating the center is a graceful bouquet of three grandiose flowers, a poppy, a lily and a rose. She created an ornamental frame, as in many of her works, which is part of the piece.

The painting is whimsical and serious, with elements suggesting folk art as well as an understanding of art history. Now in the collection of the Museum of Modern Art, it was the first piece exhibited after Stettheimer’s death in 1944, at MoMA’s 15th anniversary exhibit. In 1946, her friends Marcel Duchamp and Henry McBride organized a posthumous exhibition of her work at MoMA. 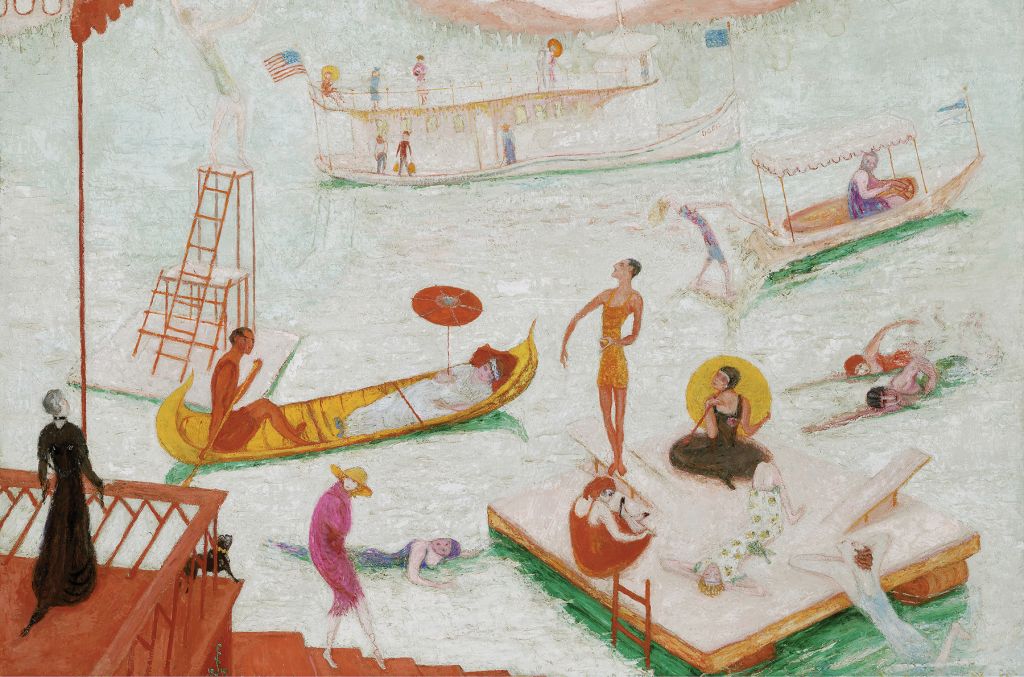 The four women and married sister Stella are portrayed in “Heat” (1919), a celebration of the mother’s 76th birthday, with two sisters knitting and two lounging, the mother sitting upright in all black, in the garden of their summer retreat in Bedford Hills. Here, too, Stettheimer plays with spatial relationships and details, echoing other painting styles, in jewel colors. This and other portraits reflect the opening line of one of her poems, “My attitude is one of love.”

Stettheimer also painted several self-portraits and views of individual figures, like “Portrait of Henry McBride” (1922), in which the noted art critic is seated outside, as an arbiter of tennis rather than art, judging a lawn tennis match in Seabright, New Jersey. In the background is a classical sculpture, New York buildings, a stage curtain and stylized figures in summer pursuits.

The American flag and patriotic symbols appear in many of her works, including “New York/Liberty” (1918-19), a celebration of the end of World War I; The Statue of Liberty protrudes from the surface in old relief, with other New York monuments painted in a condensed skyline on the island of Manhattan behind it. The viewer may find historical references, satirical notes and joyfulness.

“Asbury Park South” (1920) is a grand scene of summer in which figures swim, dive, dance, walk  on the boardwalk with parasols and sun themselves on the beach, with African-Americans and whites mixing, savoring life’s simple pleasures.

In an essay in the beautiful book that serves as exhibition catalog, “Florine Stettheimer: Painting & Poetry” (The Jewish Museum/Art Gallery of Ontario/Yale University Press), Stephen Brown, Neubauer Family Foundation associate critic at The Jewish Museum, who co-curated the show, spoke of her cutting wit. He writes, “Stettheimer gave form to perceptions of a historical phrase; the world was a stage, and everything was, to a certain extent, ‘a joke.’ But such ‘jokes,’ when transformed by a learned and talented artist, can become philosophical reflection, and that is what Stettheimer achieved. For her, the world still held wonder, in its surface froth as well as its symbolic profundity.”

Stettheimer was also involved in theater and costume design, bringing her creative energy to the stage. On view are her three-dimensional sketches for a ballet she conceived that was not produced and an opera, “Four Saints in Three Acts,” with music by Virgil Thompson and a libretto by Gertrude Stein, that was staged on Broadway in 1934. Included here are miniature handmade figures, arranged on small stages, along with photos of members of the original all-black cast and rare footage of the production.

In Stettheimer’s poetry, her words are direct and spirited, about art and New York among other themes, and about herself. Several poems are printed on the walls of the exhibition. In “Occasionally,” she writes: “Occasionally/A human being/Saw my light/Rushed in/Got singed/Got scared/Rushed in/Called fire.” She goes on to write that she has learned, in meeting strangers, to turn on a soft light as a protection “Against wear/And tears/And when/I am rid of/The Always-to-be stranger/I turn on my light/And become myself.”

After leaving the exhibition and turning into Central Park, vistas of green fields dotted with people embracing the day resemble — from a distance — Stettheimer’s dreamy outdoor scenes. Even if up close the colorful round shapes turn out to be umbrellas, not parasols, one can’t help but feel gratitude for this August splendor amidst the worries of our days.

“Florine Stettheimer: Painting Poetry” is on view at The Jewish Museum, 1109 Fifth Ave. (92nd Street), through Sept. 24. For details, TheJewishMuseum.org.