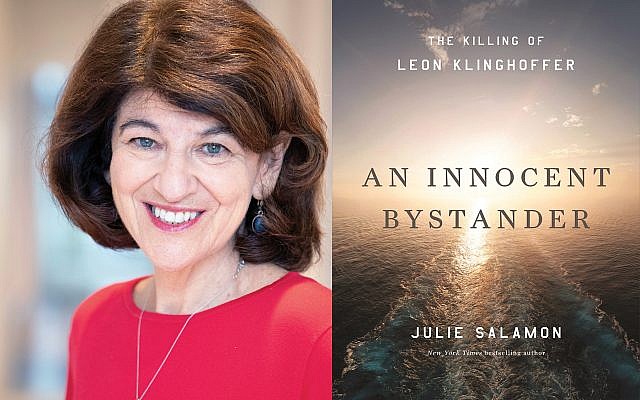 Julie Salamon’s “An Innocent Bystander” paints a textured picture of the fatal terrorist hijacking of the Achille Lauro in 1985. Sara Krulwich

Before Leon Klinghoffer’s name became known around the world, his life was in many ways a typical New York Jewish story. Born in 1916, he grew up on the Lower East Side, in a tiny apartment with four siblings behind the family hardware store.

After his father died when Leon was 13, he worked long hours in the store. When he met Marilyn, it was absolute love at first sight; they married in 1949 and lived across from Klinghoffer Supply Company on the Lower East Side, where their two daughters Lisa and Ilsa were born. Leon and his brother tried their hands at inventing new appliances and in 1955 had success with their Roto-Broil 400, an electric countertop kitchen of sorts. The family moved to a new Greenwich Village building and continued to prosper. But Leon suffered two strokes, and afterwards, when he could no longer walk or dance and had trouble speaking, he continued to go to work almost every day.

He and his wife loved the sea, and bought a modest condominium on the Jersey shore where they met many new friends their daughters liked to call the Beach People. In October 1985, the Klinghoffers set out to celebrate their 36th wedding anniversary on a Mediterranean cruise with the Beach People, aboard the Achille Lauro.

The cruise turned tragic. After four days at sea, four members of the Palestinian Front for the Liberation of Palestine hijacked the ship and then shot and killed the wheelchair-bound Klinghoffer, throwing his body into the Mediterranean.

In a book that reads like a spy thriller and a closely-observed narrative of the Israeli-Palestinian conflict, Julie Salamon asserts that Klinghoffer was shot not because he was a Jew but because he was an American. “An Innocent Bystander: The Killing of Leon Klinghoffer” (Little, Brown) is based on Salamon’s access to newly-unclassified material and interviews with many of the key figures who are still alive — including several who hadn’t spoken out previously.

“Writing this book clarified what I vaguely knew: the complexity of the situation in the Middle East, how every move on the chessboard has 10 different people kibitzing and manipulating, trying to control the game,” Salamon tells The Jewish Week in an interview. “I think it’s so important to be able to hear the multiplicity of voices in a story.”

She is an indefatigable researcher: Along with searching thousands of documents at the Ronald Reagan Presidential Library in Simi Valley, California, the Klinghoffer Family Papers at the American Jewish Historical Society (at the Center for Jewish History), documentation at the Anti-Defamation League Resource Library and translated transcriptions of the interrogations and trials of the hijackers in Italy, Salamon tracked down and convinced the two wives of Abu al-Abbas, the Palestinian mastermind behind the hijacking, and his sons, to speak with her. She also interviewed Bassam al Asker, the youngest of the four hijackers, the Italian prosecutor and defense attorney who represented the hijackers, an American pilot who flew one of the planes that intercepted the Egyptian flight carrying the hijackers, the Syrian arms dealer who provided weapons for the hijacking (now in a U.S. federal prison for arms dealing in South America) and others. In addition, she interviewed the wife and daughter of Alex Odeh, a Palestinian-American killed in an act of retribution a few days after the hijacking. Her portraits serve to humanize people on all sides.

Some of the 80 people she interviewed asked not to be named. When she interviewed Carmi Gillon, former head of the Shin Bet, Israel’s internal security force, she learned that he is a fan of the television series “Fauda,” as are Odeh’s daughter Helen Odeh, al-Abbas’ son Omar al-Abbas and the author herself.

Salamon also extensively interviewed Ilsa and Lisa Klinghoffer, the daughters of Leon and Marilyn, who died four months after her husband was murdered. In fact, the book was initially titled “Klinghoffer’s Daughters,” but Salamon widened the narrative beyond the American story.

Klinghoffer was the only person killed on the ship, but, in Salamon’s view, not the only innocent bystander. She tells the story of Alex Odeh, who was born into a Roman Catholic family in a town near Ramallah, studied at Cairo University and later immigrated to the United States, completed a master’s degree at California State University and then worked for the American-Arab Anti-Discrimination Committee in California. He became a U.S. citizen but returned to his home, where he met his wife, and brought her back to California. Salamon describes him as a “peaceful warrior” and poet committed to the Palestinian cause.

The week of the hijacking Odeh was interviewed on the evening news, and while he condemned the hijacking and offered his sympathies, the only line that the station aired was: “Arafat is man of peace.” The next day, his office was blown up and he was killed. He was supposed to speak at a synagogue that evening. Salamon explains that the case is still open, but the prime suspects were members of the Jewish Defense League.

While the Klinghoffers were called by President Reagan and invited to the White House, no one reached out to Norma Odeh and her three young children.

For Salamon, the sons of Abbas were also innocent bystanders, their lives upended by this series of events. Omar al-Abbas called Salamon after reading the book to say how grateful he was for her depiction of his family, in contrast to the usual portraits “always presented in stereotypes, in bold black letters.” She says, “Even though he has gotten far from the movement that obsessed his father, he believes, and I agree, that Abbas truly believed in the Palestinian cause, even if he defended it with methods that seem wrongheaded in so many ways.”

The four hijackers all served time in prison and have been released; Bassam al Asker is in Lebanon and the others are dispersed (Salamon doesn’t know where).

She also discusses the controversial 1991 opera “The Death of Klinghoffer” by director Peter Sellars, composer John Adams, choreographer Mark Morris and librettist Alice Goodman. When it was revived at the Metropolitan Opera in 2014, the author made a point of attending, as she realized that many protesting outside had never seen it, and that a scene thought to be offensive was omitted. That was the first moment when Salamon thought there might be a book to write. Then, the following year, she attended a memorial program for the Klinghoffers, marking the 30th anniversary of the hijacking. At the time, Salamon and Ilsa’s husband Jerry Arbittier were co-presidents of the Village Temple. Hearing the sisters and others speak inspired her again to think about writing a book.

The author is the daughter of Czech immigrants who survived the Holocaust, and grew up in a rural village in Ohio, where her father was the town doctor. A former reporter and critic for The Wall Street Journal and The New York Times, Salamon is the author of ten previous books including “Wendy and the Lost Boys,” a biography of Wendy Wasserstein; “The Devil’s Candy,” about the making of the film “Bonfire of the Vanities”; and “The Net of Dreams,” about her parents’ Holocaust experience.

“I’ve been drawn to stories that deal with families and communities, often with Jews involved, and often with violence involved,” she says. “Everything for me probably comes back to the Holocaust, and the notion of what it is to be a survivor, to have a horrible thing happen and there you are, dealing with it. I’m also drawn to the idea of resilience.

“My first goal is to write a good book that people will find absorbing. And to write a book that adds something of value to our consideration of history. Often, events that we think we know become sort of totems, like Leon Klinghoffer being thrown overboard and then all the assumptions that flow from that. What I’d like people to come away with is the realization that there are usually many things we don’t know, that facts matter, that you should not just accept things at face value and that history is complex. When looking at the motives of people or countries or institutions, it’s never exactly what the headlines say.

“I love history — especially the stories of the people who are left out of it. I wanted this to be not just the story of headline makers but of other people – those involved in the Situation Room, the daughters, the wives, the sons.”