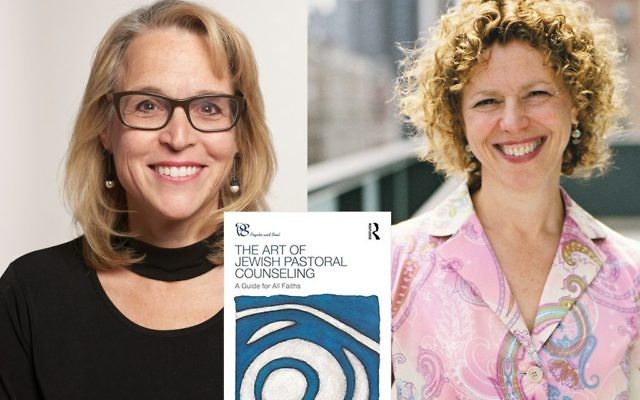 Rachel Yehuda, left, and Michelle Friedman co-wrote “The Art of Jewish Pastoral Counsel: A Guide for All Faiths.”

For matters of life and death as well as for more ordinary events of life that turn problematic, rabbis often get called in. “Clergy are first responders,” psychiatrist Michelle Friedman says in an interview.

As Friedman explains, many rabbis are unprepared for the challenges they face. In their years of study, they grow adept at answering questions of Jewish law and ritual, but that doesn’t necessarily carry over into dealing with issues of family conflict, serious illness, interdating and intermarriage, loss, aging and trauma and suffering of all sorts. While seminaries are increasingly offering training, much of the learning happens on the job.

In a new book, “The Art of Jewish Pastoral Counseling: A Guide for All Faiths” (Routledge), Friedman, who founded and directs the pastoral counseling program at the Modern Orthodox rabbinical school, Yeshivat Chovevei Torah in Riverdale, and Rachel Yehuda, a psychologist and neuroscientist, provide a practical, thoughtful and vibrant approach. The book is written for rabbis and Jewish educators, although clergy from other faiths will find parallels in their own work. For the general reader, the well-written text provides a window into the lives of contemporary American rabbis and the tangled issues they face.

The narrative is propelled by pointed scenarios drawn from the authors’ practices, featuring four fictional or composite characters — two male rabbis, one female rabbi, and a woman who is an educator and director of a JCC, among them experience in congregational life, Hillel on campus and chaplaincy. The authors discuss the nuances of each situation, the spiritual and psychological implications and propose effective approaches, building toward a grounded pastoral practice.

Their advice is based in listening. “What clergy do wrong,” Friedman explains, “is leaning forward and talking too much. In their own anxiety, they are not believing in the power of pastoral listening and hospitality. People feel like they have to make it better, to fill the space with words. They really need to quiet down.”

When asked about the difference between pastoral counseling and traditional therapy, Friedman says, “A therapist is committed to alleviating symptoms, maximizing happiness, but not, generally speaking, connected to a particular value system. A clergy member isn’t treating a person, but trying to understand the person, helping to make meaning.”

Yehuda, who is professor of psychiatry and neuroscience at the Icahn School of Medicine at Mount Sinai, and director of mental health at the James J. Peters Bronx Veteran Affairs Hospital, says, “Our book helps rabbis and others use their natural reactions to identify the correct pastoral response in complex situations. It also teaches how to suppress instincts that will not be helpful — it takes training not to exclaim ‘Oh my God!’ when someone tells you something horrific. It is more helpful and calming to not act shocked, but inquire in a more sober way.”

“We don’t have to teach the whole ‘torah’ of psychology, but we emphasize active, non-judgmental listening and using one’s response to find the wisdom that will help the person in need. Wisdom comes first from the silence and the reflection you do.”

Friedman, who is also a psychoanalyst and associate clinical professor of psychiatry at the Icahn School admits that some people are naturally better at this than others, and that it is an art, as the book’s title implies. “Some have greater emotional intelligence, greater intuition. They have to synthesize spirituality and deep Torah knowledge, prayerful life, and understanding of basic psychology, and they have to be aware of their own emotional pulse,” she says.

The book is dedicated to the late Rabbi Dr. Zvi A. Yehuda, Rachel’s father, who had the kind of innate wisdom and sensitivity that drew people to him.

Looking back on her path to psychiatry and then to pastoral counseling, Friedman, who is the daughter of Holocaust survivors and grew up on a chicken farm in the Catskills, recalls that she was first inspired to go into medicine through reading fiction. At Barnard, she studied religion and was very much influenced by Professor Elaine Pagels, and was drawn to the connections between narrative and meaning, as well as spiritual and psychological transitions, which led to her to psychology and philosophy and then to medicine.

About 20 years ago, while practicing psychiatry and studying at Drisha, she set up a day of learning in the wake of a teacher’s death to focus on Jewish responses to anxiety and depression. The conference brought an unexpected crowd, and she was subsequently invited to attend a retreat with Conservative rabbis to talk about pastoral counseling. There, she was struck by the loneliness of these rabbis out in the field, who were dealing with difficult issues with no support or feedback. And, through another chain of connections, she got a call from Rabbi Avi Weiss, founder of Chovevei Torah, asking her to run the rabbinical school’s pastoral counseling program when the school opened in 2000, which she did. From the beginning, she initiated process groups with facilitation for students to share their experiences. Yehuda joined the school’s board of directors, and Friedman invited her to teach students about dealing with people in the aftermath of disaster and trauma.

Just after the November election, Friedman was invited by Rabbi Julie Schonfeld, executive vice president of the Conservative movement’s Rabbinical Assembly, to facilitate a phone seminar with about 30 rabbis, to deal with the outpouring of feeling many were facing in their congregations.

“I talked about making space for them to hold their own distress, so they could be available to feel what was going on. I talked about the importance of finding hope in action, and urged them to take on constructive involvements in meaningful things. After any trauma, you have to get back to action and purpose and feel connected. The confusion of despair and hopelessness can be toxic.”