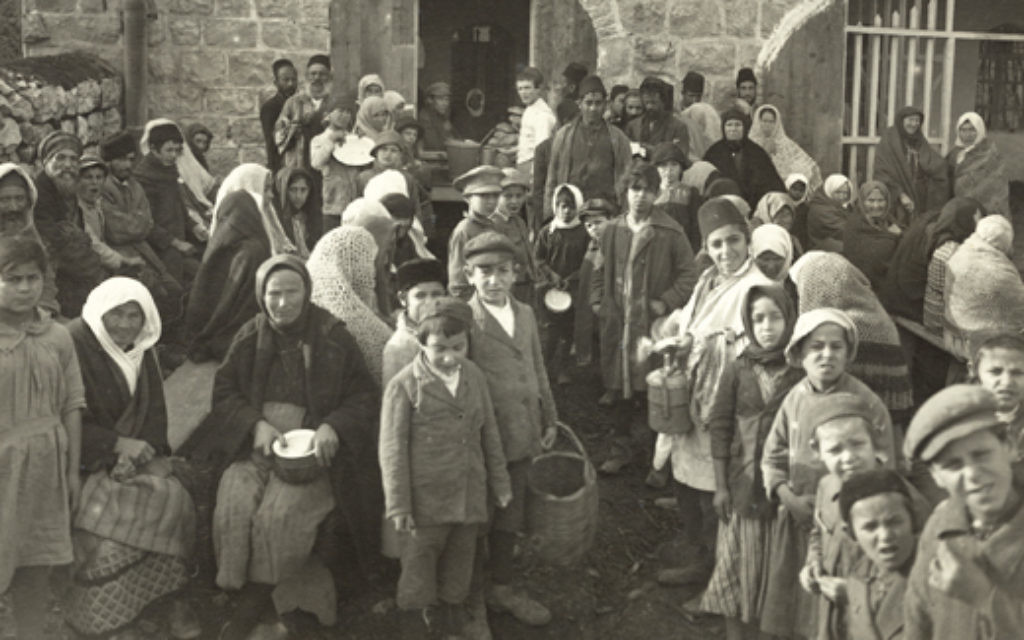 On July 14, 1945, from Warsaw, Luba Mizne sent this pared-down story of her life in a cablegram to the New York office of the American Jewish Joint Distribution Committee: I LIVE REQUIRE HELP.

JDC officials don’t know about Mizne’s identity or her fate, but her words inspire the title of a centennial view of the humanitarian efforts of “the Joint,” as the organization is known. Many viewers will see their own family’s footprints in the show.

Now on view at the New-York Historical Society in Manhattan, the exhibition features objects and historical photos — some not previously exhibited — drawn from the extensive JDC archives. Included are rare letters from Albert Einstein (thanking the JDC for helping French children escape to the U.S.) and John D. Rockefeller (praising a JDC program) and other documents that tell the story of the Joint’s outreach to Jews around the world, as well as nonsectarian help to alleviate suffering after national disasters. (The show runs through Sept. 21.)

When asked about the museum’s interest in these materials, curator Marilyn Satin Kushner says, “We do history and we do New York. The JDC is part of the history of New York City.”

The JDC was founded in 1914, soon after the outbreak of World War I, by Jacob Schiff and Henry Morgenthau Sr. At the time, Morgenthau was serving as ambassador to the Ottoman Empire, and saw firsthand the crisis Jews were facing. The founders at first thought the organization would be a temporary one, but they soon realized that the needs continued and expanded.

“For 100 years, we at JDC have put into action the ideal that all Jews are responsible for one another and all humankind,” Alan H. Gill, CEO of JDC, says.

A large painting depicts a meeting of the JDC founders at the office of Felix M. Warburg on July 10, 1918. Along with the 26 men at the table — including rabbis and business and communal leaders — are two women, one the official stenographer, and the other, the group’s comptroller, Harriet B. Lowenstein. It was Lowenstein who designed the system through which families in America could transfer funds to their relatives back in Europe. A 1917 photo shows a line of Jews at the JDC office in New York, waiting to send money.

Many other historical photographs were taken by JDC photographers sent to Europe to document Jewish life and the plight of refugees. Roman Vishniac was among those commissioned by the Joint; many of the other photographers of unforgettable images are unknown. In more recent years, distinguished photographers like Frederic Brenner and Chrystie Sherman have documented Jewish communities for the Joint, and some of their photos are featured here, including a photo by Sherman of a lineup of Jewish children at a JDC-supported school in Djerba, Tunisia, in 2005. Videos document some other recent efforts, like the summer camp in Hungary that brings together Jewish kids from 20 countries.

Linda Levi, assistant executive vice-president of the JDC, who directs the archives and co-curated the show, says that the JDC Archives include three miles of documents and more than 100,000 photographic images and other materials.

A book that ties in with the exhibition, “I Live. Send Help: 100 Years of Jewish History in Images from the JDC Archives,” includes a prologue by author David Bezmozgis, who was born in the former Soviet Union and helped by the Joint.

New Yorker Lilli Platt lent the pint-sized pink-flowered pinafore dress she was given by the Joint when she arrived with her family at Ellis Island from a displaced persons camp in 1949. Also on display is the multi-entrance visa issued to Ralph I. Goldman, honorary executive vice-president of the Joint, for travel in 1991-1992 throughout the former Soviet Union. The widely admired Goldman also turns 100 later this year.