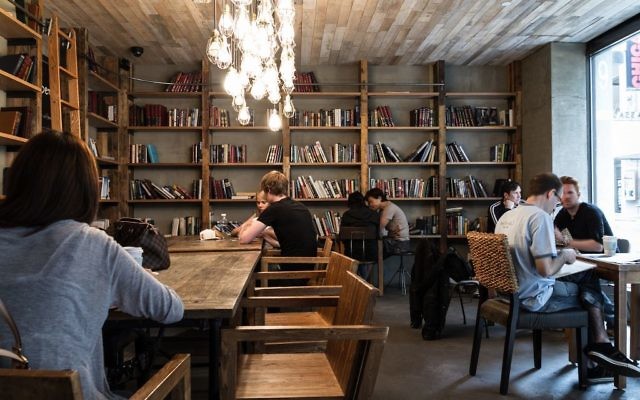 Perhaps because I’m writing this as I sit in a vibrant, quirky coffee shop in Washington Heights, its walls decorated with graffiti-inspired art and fake ivy, it strikes me that whenever I arrive in a new city, I make a beeline for the nearest independent coffee house. But it wasn’t until I read Shachar Pinsker’s new book, “A Rich Brew: How the Café Created Modern Jewish Culture” (NYU Press), that I learned that Jews and coffee shops have been connected for at least a century; Jews, especially Jewish writers, he argues, have made the café their primary gathering place and, in many cases, their collective muse. (Read The Jewish Week’s review on the book here.)

Pinsker, who teaches Hebrew literature at the University of Michigan, chronicles the history of cafés in six cities (Odessa, Warsaw, Vienna, Berlin, New York and Tel Aviv), showing that major Jewish journalists, novelists, poets and playwrights, from Sholem Aleichem to Isaac Bashevis Singer, were not just inspired by coffee shops but frequently used them as the settings for their work.

Jews have a long history with coffee. While coffee houses first sprang up in Constantinople, Cairo and other Middle Eastern cities during the mid-sixteenth century, it was a Jewish entrepreneur who brought the coffee house to Europe, opening one in Livorno in 1632. The first café in England was opened in 1651 in Oxford by one “Jacob the Jew,” who was an immigrant from Lebanon. 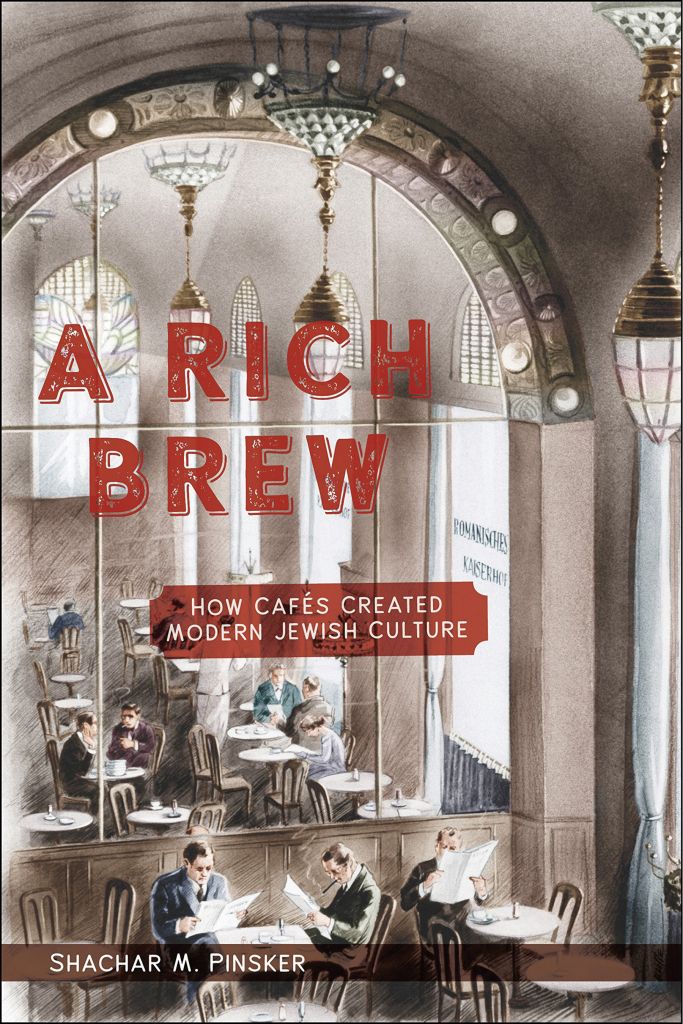 As coffee drinking became popular throughout Europe, according to the late Robert Liberles in “Jews Welcome Coffee: Tradition and Innovation in Early Modern Germany,” engagements between Jewish couples were sealed by the parents over a cup of coffee rather than a drink at the local tavern. David Liss’ 2003 historical novel, “The Coffee Trader,” centers on a 17th-century Jewish refugee from the Portuguese Inquisition who tries to corner the market on coffee only to be caught up in all kinds of commercial and romantic entanglements.

The kinds of food served in cafés also often had a Jewish connection; think of the Viennese Jewish pastry maker Franz Sacher and his famous creation, Sacher Torte, or Stephen Klein, also from Vienna, a Jewish chocolatier who escaped to America in 1939 and started Barton’s Candy Corp.

Donald Schoenholt is the president of Gillies Coffee Company, the oldest coffee maker in the country. The business, which was started in 1840 by a Scottish family, was taken over by Donald’s uncle, Mac, in 1912. I first met Donald in the late 1980s, when I joined the Little Neck Jewish Center, which he served as president. It was the era of the yuppies; Starbucks (acquired in 1987 by Howard Schultz, a Jewish guy from Brooklyn) was just emerging on the scene and “specialty coffees” were all the rage. As Schoenholt put it, “People were starting to eat brie instead of Velveeta,” and they needed a more upscale coffee to go with their meals.

Schoenholt told me that Jewish merchants participated in the American coffee trade since the 18th century, and that, “with each wave of Jewish immigration, more Jews were drawn to it.” While New York was the center for manufacturing coffee, he said, the major port for the importation of coffee was New Orleans, where Jewish merchants like Jacob Aron traded in both coffee and gold. By the 1880s, Philip Wechsler, an immigrant from Austria who became a major donor to the United Jewish Appeal, had opened a coffee-roasting factory in New York. William Black (né Schwartz), who started by selling shelled nuts under a stairway in Times Square, founded the chain of luncheonettes known as Chock Full o’ Nuts. And Samuel Schonbrunn, a Jewish immigrant from Hungary, created the Savarin brand of coffee, which was served at the Waldorf Astoria.

In our time, coffee shops loom large in pop culture — think of Monk’s Café, where the characters on “Seinfeld” hang out in almost every episode, sitting in a booth near the front door. (The exterior shots were taken, of course, at Tom’s Restaurant, an actual diner at Broadway and 112th.) Ruth Cohen (that’s her real name), the cashier, appears in more episodes than any other character besides the stars. Jerry Seinfeld went on to create and host the web series “Comedians in Cars Having Coffee,” now in its 10th season; it has featured Mel Brooks, Bob Einstein and Sarah Silverman.

And who could forget “Diner,” Barry Levinson’s semi-autobiographical 1982 valentine to his hometown of Baltimore; the film is about a group of 20-something Jewish friends in the 1950s who made the local diner their gathering spot.

Even non-Jews associate coffee with the Chosen People. As a sign outside a church in Harveys Lake, Pa. (in the Poconos) asked last summer, “How does Moses make coffee? Hebrews it.”

Ted Merwin’s column appears the fourth week of the month.