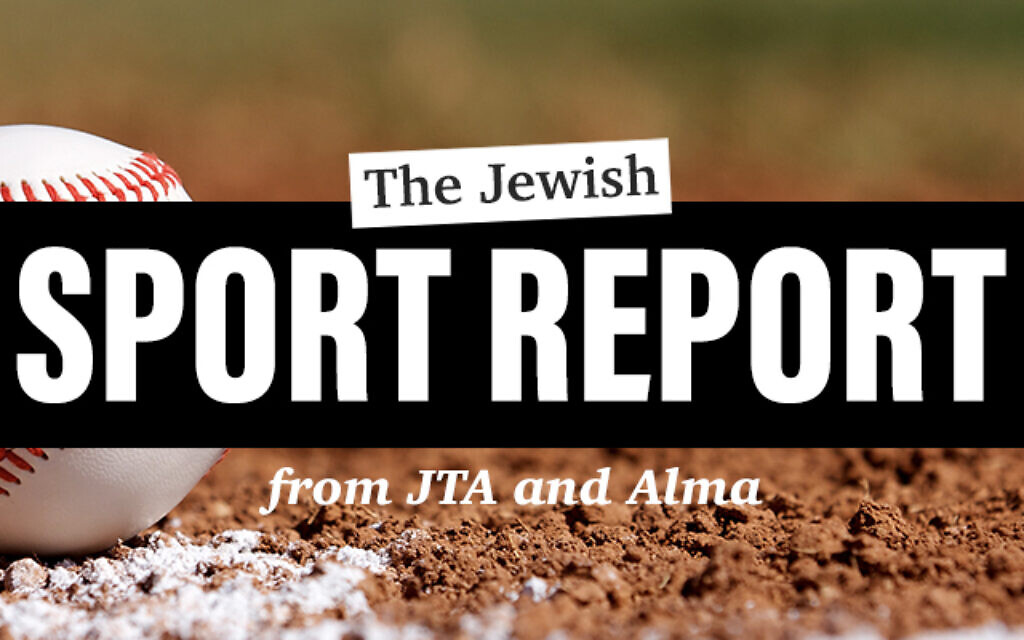 Hello! Welcome to The Jewish Sport Report, a brand new sports newsletter from your friends at the Jewish Telegraphic Agency and Alma. We are excited to bring you the latest and greatest sports news each week, all through a Jewish lens. Grab your peanuts and Cracker Jacks, and don’t forget to share this with your friends!

What made last night different from all other nights? No, it wasn’t the Four Questions — it was the four sports. For only the 25th time ever, all four men’s professional sports leagues were in action on the same day: MLB, NBA, NFL, and NHL. We hope you celebrated accordingly by telling your friends and loved ones whenever a Jewish athlete was on screen. 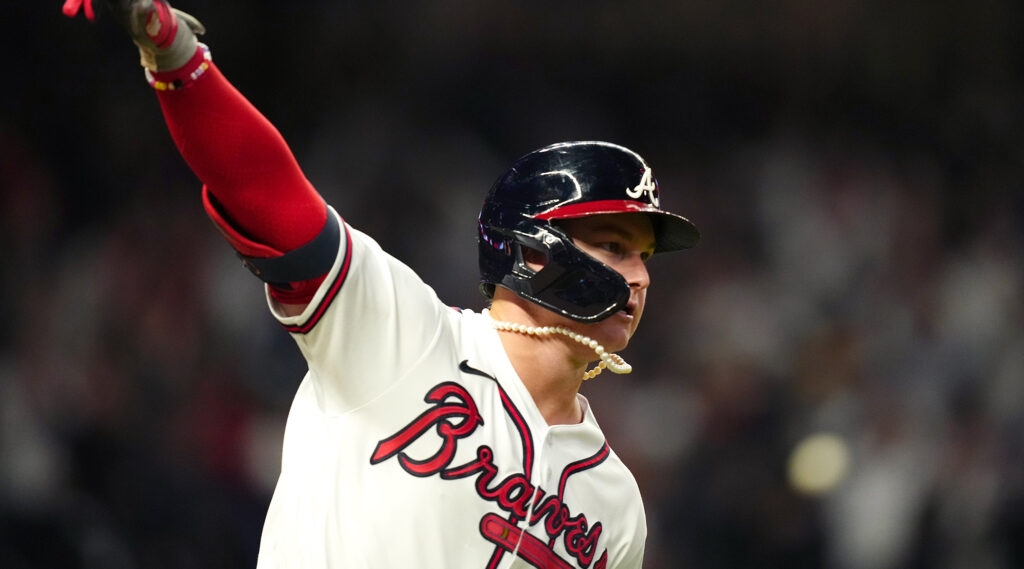 The Jewish slugger thrives like few others do in the MLB playoffs. This year he already has a .308 batting average, 3 home runs and 9 runs batted in for his Atlanta Braves — many of those hits coming in clutch situations.

Pederson spent seven years with the Los Angeles Dodgers, but this postseason, he’s been a key figure in carrying the Braves to a 3-2 lead over LA in the National League Championship Series. His Dodger teammates popularized the term “Joctober.”

“They don’t call it ‘Joctober’ for no reason,” his former teammate Max Muncy once said. “That guy performs on the big stage. It’s just what he does.”

But this year, the craze surrounding Pederson — who has a Jewish mom, and has played for Team Israel — really began on Sept. 29, when the Braves played the Philadelphia Phillies. He came up to bat wearing a pearl necklace — and since then, he hasn’t played without it. In an interview the next night, after the Braves clinched the NL East title, the 29-year-old said “It’s a mystery for everyone, they’ll never know.” On Oct. 2, his legend grew, as he said he was wearing them because he’s just a “bad bitch.” More recently, he explained the inspiration came from seeing other pearl necklaces out and about. “They kind of caught my eye. I was like, ‘You know, those look good,’” Joc said. “I texted my jeweler and got some out.’’

As my colleague Evelyn Frick wrote in Alma: “Whether Joc realizes it or not, his decision to wear pearls during a game, a piece of jewelry which is often associated with 1950s-era housewives and thus femininity, is a subtle act of transgressing sports fashion norms, the pervasive hyper masculinity of professional sports, and ultimately pushes gender boundaries in an extraordinary way. In short, it’s an act that took a lot of chutzpah.”

And now that it’s October — excuse us, Joctober — Joc has given Jewish baseball fans everywhere an easy Halloween costume idea: throw on a Pederson jersey, some costume pearls, even cut your hair into a mohawk, and bam. You, too, could be a Jewish MLB star. (Please, tag us in photos @jtanews and @hey.alma if you / your children do this.) We will remain on Joc Pederson Pearl Watch (JPPW, if you will) throughout the rest of the postseason, and will keep you posted.

Side note: Joc’s Jewish teammate, Braves starting pitcher Max Fried, has also had an impressive October. Despite a less-than-stellar performance last night, Fried is 1-1 this postseason, with a 3.78 earned run average and 17 strikeouts in three starts. 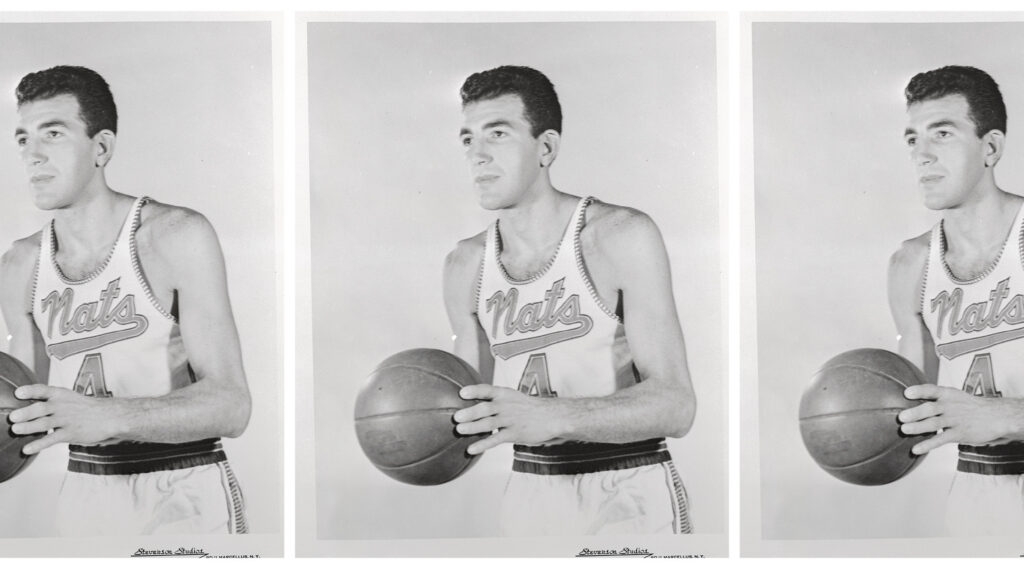 As part of the festivities marking its semisesquicentennial (look it up!), the NBA released its Top 75 players list this week over the course of three days. Two days and 50 players in, we were getting nervous — no Dolph Schayes. The NBA’s most distinguished Jewish player made the cut back in 1996 when the league celebrated 50 years with a Top 50 list. But recency bias being what it is (and an understandable skepticism about the style and quality of play in the NBA’s pre-integration era), we were worried that our long-ago legend would get the shaft this time around. Not to worry — shanda averted.

When the NBA released the final 26 names on Thursday night (one extra due to a tie), Schayes was on the list. And for good reason. He was a 12-time All-Star who from 1950 to 1961 was ranked as the best or second best power forward in the league (six times each). If they gave out NBA Finals MVPs back then, he would have won one for leading the Syracuse Nationals (the future Philadelphia 76ers) to the league title in 1955. Yes, the league he entered was a different universe and his high-arching two-handed set shot (nicknamed Sputnik) would be unrecognizable in today’s game. Yet he is widely recognized as an era-crossing player, who remained a star even after the league left its prehistoric era and took its first steps toward the modern game with the arrival of Black players and introduction of the 24-second shot clock.

Want more Dolph? Check out this rundown of factoids and career highlights on JTA.

The playoffs continue tonight with Game 6 of the American League Championship Series between the Boston Red Sox and Houston Astros. Will Alex Bregman and the ‘Stros advance to the World Series, or will Chaim Bloom’s Sox force Game 7? And after falling to the Los Angeles Dodgers last night, Pederson and the Braves head back to Atlanta for Game 6 tomorrow night.