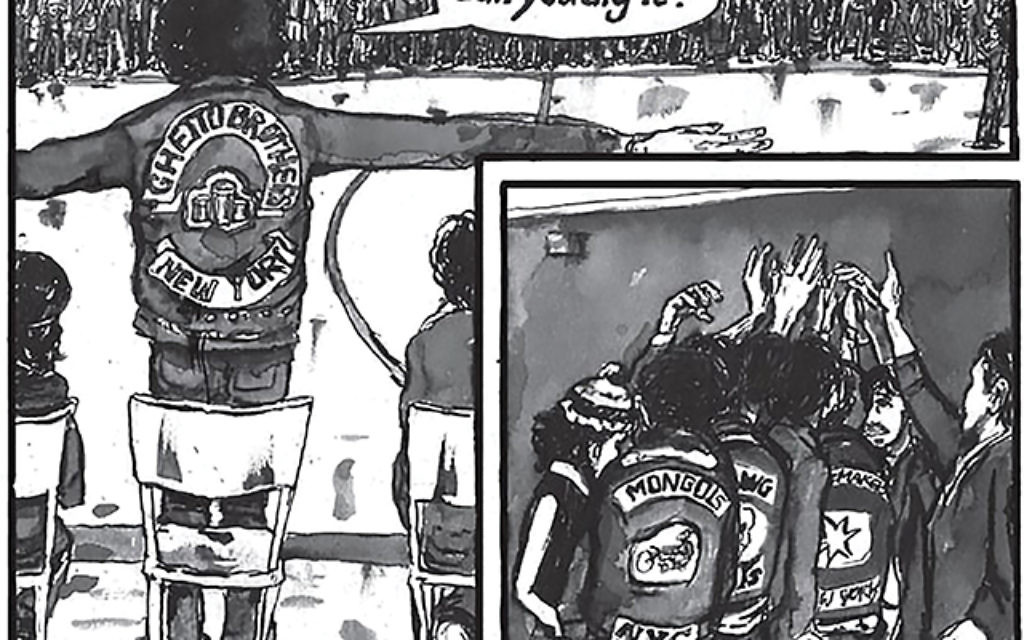 There was a moment, back in 1971, when the South Bronx felt like it might ignite from gang violence. But one gang leader saw another way.

This December marks the 45th anniversary of the Hoe Avenue Peace Meeting, an unprecedented gathering of South Bronx gangs organized by a gang that called itself Ghetto Brothers. Benjy Melendez, the Ghetto Brothers’ leader, was the visionary who said enough to the violence and who sought a peace treaty. Soon after, gang members — no longer afraid of going into rivals’ neighborhoods — started giving street parties, with music and dancing. From here, hip hop emerged.

Melendez and the Ghetto Brothers released an album of their music, “Fuerza,” or strength, and Melendez had a lead role.

The Jewish angle here is that at around that time, Melendez discovered that there were reasons why his Puerto Rican mother quietly bought bread from Jewish bakeries on Fridays and lit two candles. He realized that he was the descendant of hidden Jews, and began exploring Judaism. Soon, he found his way to the Intervale Jewish Center, the last synagogue in the South Bronx, and became an active member until that shul shut its doors in 2011.

Melendez is the subject of a graphic novel by Julian Voloj and Claudia Ahlering, “Ghetto Brother” (NBM/ComicsLit), which brings the reader intimately into the dark abandoned buildings turned gang clubhouses of the South Bronx, and into the big heart of Melendez.

Voloj’s own background — immigrant, German, Latin American, Jewish — eased the way for him to connect with Melendez and others he interviewed. He first met Melendez in 2009, while working on a photography series showing the Jewish community’s diversity.

Born in Germany, Voloj is the son of Colombian parents. His grandparents survived the Holocaust, moved to Colombia and then later returned to Germany. In elementary school, his best friend had a photo of his grandfather in an SS uniform in his living room.

“Judaism was kept at home, we didn’t talk about it in the outside world,” Voloj tells The Jewish Week. Their synagogue had 80 members.

Later, Voloj, 42, served as chairman of the European Union of Jewish Students. He met his wife while on a 2002 speaking tour of the U.S. and later moved to New York, where he has worked for the Museum of Jewish Heritage, Joint Distribution Committee, and now at the Metropolitan Council on Jewish Poverty, where he serves as director of development.

The book was also published in Germany, France, Spain and Brazil. Melendez, 64, has enjoyed the recognition. But he is in poor health, waiting for a kidney donor so that he can have a transplant. There’s a mezuzah on the doorpost of his fifth-floor walk-up apartment in Harlem, and he gets around in a wheelchair. After leaving the gang, Melendez worked as a social worker with youth at risk; many have found him since the book was published and told him that he saved their lives.

About the book, Voloj says, “It’s a very American story, about how one person can make a difference.” He adds, “It also shows how things are complex, that you can’t handle complex issues with empty, easy slogans.”

At readings — so far, at libraries and the Bronx Museum — former gang members show up with their old gang jackets, their “colors,” and grandchildren in tow. Voloj will be doing his first talk at a synagogue next month.

Julian Voloj will speak about “Ghetto Brother” in conversation with singer and composer Marika Hughes, whose new CD is “New York Nostalgia,” in this year’s Jewish Week Literary Summer program, “Only in New York: Stories of Jewish Identity, Creativity and Community, from the Upper West Side to the South Bronx,” on Wednesday, Aug. 17 at B’nai Jeshurun, 270 W. 89th St., 7 p.m. Free but reservations are recommended. events@jewishweek.org.