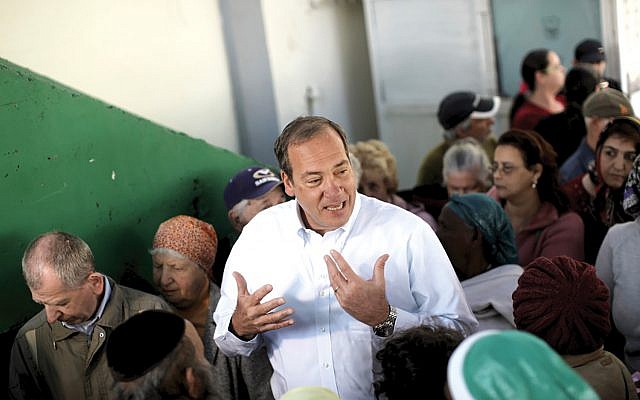 Rabbi Yechiel Eckstein at a Passover food distribution site in Lod, Israel, as part of his work with the International Fellowship of Christians and Jews. IFCJ

Zev Chafets, the U.S.-born author and columnist who made aliyah a half-century ago, sat down for a cup of coffee a few weeks ago with Rabbi Yechiel Eckstein, a fellow immigrant from the States.

Rabbi Eckstein, best known for his projects that raised an estimated $1.6 billion dollars over a generation and a half from Christian donors to support poor Jews in Israel and the former Soviet Union, mentioned the next major project he had in mind – an extension of his fundraising work to Hong Kong.

“He was very eager to spread his message” of interfaith cooperation, Chafets said.

The rabbi never got his chance.

Rabbi Eckstein died of a heart attack in his Jerusalem home on Feb. 6. He was 67.

There has been an outpouring of praise for his work from members of the Jewish and Christian communities in recent days. His activities improved relations between Jews and Christians as well as the lives of millions of poor Jews; it also served as a magnet for controversy.

As founder of the International Fellowship of Christians and Jews (IFCJ), Rabbi Eckstein became, according to Chafets’ 2015 biography “The Bridge Builder: The Life and Continuing Legacy of Rabbi Yechiel Eckstein” (Sentinel), “a pariah” in many Jewish circles for both his uncompromising management style and his close relationships with Christians, particularly evangelical ones.

Following his death, the rabbi was praised by Christianity Today magazine as “a major partner and friend.”

“A towering figure in the philanthropic and Jewish world,” said the American Jewish Joint Distribution Committee, on whose board Rabbi Eckstein served.

Rabbi Eckstein had a complicated relationship with the Jewish Agency for Israel – he was, through the IFCJ, a major funder and board member who later broke with the group and competed with it in its rescue work. But Isaac Herzog, the new chairman of the Jewish Agency, called Rabbi Eckstein “a leader who worked tirelessly” on behalf of the Jewish people. And Jonathan Greenblatt, national director of the Anti-Defamation League, said the rabbi “made significant contributions by fostering evangelical support for Israel.”

As a sign of the mixed feelings that Rabbi Eckstein’s activism had aroused, representatives of several Jewish organizations declined to speak to The Jewish Week about his legacy. Some criticized his portrayal of poor Jews in Israel and in other countries left the impression that Jewish groups did not take care of their own.

People who had worked with the rabbi remembered him as an Orthodox Jew who was among the first leaders of U.S. Jewry to realize the potential of improved ties with fundamentalist Christians, a scholar of Jewish mysticism and philosophy who also had an interest in Eastern religions, a generally easygoing man with a hair-trigger temper, and a talented singer who carried a guitar wherever he travelled. Ordained by Yeshiva University, he respected rabbinic authority though he frequently flouted the opinions of prominent rabbis when he thought his own judgment was superior. He was a confident individual known for his ego, though he battled bouts of depression. And he was a visionary who began his ecumenical work as a one-man operation on a small salary and, despite harsh criticism from his Orthodox community and others, built IFCJ into a 70-employee philanthropy that brought him a substantial six-figure income.

A rabbi’s son, he grew up in Ottawa, Canada, and founded IFCJ (originally called the Holyland Fellowship of Christians and Jews) after handling interfaith relations for the ADL.

His interfaith work in Chicago sparked his interest in the evangelical community, which was virtually a stranger to Jews in this country.

“People did not think along those lines back then,” said Rabbi Shmuley Boteach, who knew Rabbi Eckstein for several decades.

Rabbi Boteach, a prominent author and lecturer, has also drawn criticism for his close collaboration with Christians, both in this country and during his previous work as a Lubavitch shaliach in England. “What we had in common was feeling very misunderstood by the world Jewish community,” Rabbi Boteach said.

Rabbi Eckstein gravitated towards Jews who achieved positions of prominence in the Jewish and wider communities while charting independent paths.

“Change agents,” said retired Connecticut Sen. Joseph Lieberman, who was also a longtime friend of the rabbi. “It’s easy to [just] play the game, but nothing changes if you play the game,” said Lieberman, who served in the Senate as a Democrat for three terms before switching to Independent during his fourth, drawing controversy of his own.

Rabbi Eckstein, Lieberman said, “changed the attitude of skepticism [about evangelical Christians] in the Jewish community. I gave Rabbi Eckstein tremendous credit for this transformation.”

“Yechiel may have changed attitudes among some beneficiaries [of IFCJ funds], but I think that there is still widespread ignorance and negative prejudice about Christians and Christianity generally in Israel; and in the U.S., there is a profound suspicion of Evangelicals,” said Rabbi David Rosen, the American Jewish Committee’s international director of interreligious affairs.

“We need to be careful of generalizing about Evangelicals,” Rabbi Rosen said in an email interview. “We would do better to refer to those evangelicals who are ‘premillennial dispensationalists’, i.e. those who believe that we are living at the end of times, that the establishment of the State of Israel and the ingathering of the exiles is an indication of this.”

Evangelicals, said Chafets, saw Rabbi Eckstein as someone “who was not trying to get their money.”

“Our donors are those Christians who genuinely believe Jews and Christians share a biblical view and ought to come together for the sake of their shared vision, [part] of which is Israel,” Rabbi Eckstein said in a 2009 Christianity Today interview.

In speaking non-critically of the Christian faith, “I am as far as anyone can go and continue to have Jewish bona fides,” the rabbi told the magazine.

Chafets, in the introduction to his biography of Rabbi Eckstein, writes of his first meeting with him, at a kosher pizzeria here in 2004: “He was sincere and friendly, devoid of the irony that enlivens so much [contemporary] conversation.”

After writing a profile for the Daily News, Chafets did a longer one for New York Times Magazine, then decided to write the book. The two became close friends.

Chafets, raised in the Reform movement in Michigan, calls himself a secular Jew. “I’m not a ‘rabbi person,’” he said in a telephone interview from Israel last week. “If I needed a rabbi, it would be Yechiel.”