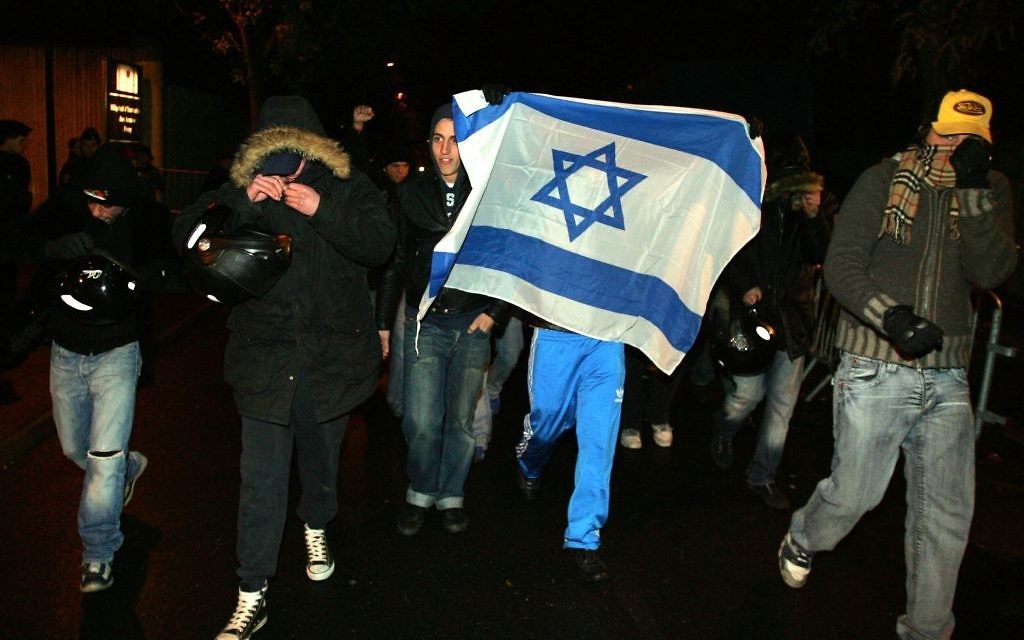 Amid a spate of violent anti-Israel protests, young Jews are turning increasingly to militant solutions.

In Canada, members of the Jewish Defense League, JDL, the activist group founded by Rabbi Meir Kahane in 1968, have been prominent at several high-profile street rallies, including last month at Palestine House in Mississauga. According to a report by the Canadian Jewish News, the faceoff, which resulted in two arrests and one JDL member “shedding blood,” marked the return of the Jewish activist group to North America.

Indeed, the JDL has announced intentions to set up chapters in Montreal and Calgary – and potentially Ottawa and Vancouver – in response to growing demand.

Though the JDL was very active in the United States during the seventies and eighties, the group was branded a “right-wing terrorist group” by the FBI in 2001, after a failed attempt to bomb a California mosque.

“The group was very active in the seventies, but the country was a very different place,” said Rabbi Steven Burg, director of the Simon Wiesenthal Center. “But I don’t think it has a chance of coming back today. New York has such an excellent relationship with law enforcement.”

Still, the JDL’s resurgence in Canada reflects a global reality.

In France, many frustrated young Jews have turned to the JDL (Ligue de Defense Juive in French) to combat repeated incidents of hostility. Most recently, the JDL made headlines when a pro-Palestinian riot outside the Synagogue de la Roquette in central Paris turned into a street brawl between the rioters and dozens of Jewish men who came to defend the synagogue. Over 200 terrified people were trapped inside the building until the violence diffused.

The JDL also made the news when six Jews were arrested for tracking down and beating up alleged anti-Semites, after identifying them from online self-portraits.

“It is no surprise that they are having more of presence because of the greater physical fear that Jews are experiencing,” said Abraham H. Foxman, National Director of the Anti-Defamation League. “However, I do not think they will be successful because Jewish security is responsibly handled by both various local Jewish institutions, law enforcement and with aid from Israel when appropriate and necessary.”

Kahane left behind a legacy of vigilance. "If I have succeeded in instilling fear in you," Rabbi Kahane said in the closing statement of his standard speech, "I consider this evening a success." He predicted that anti-Semitism in American would “explode.”

Though Kahane’s concerns about anti-Semitism in America never came to fruition (a recent survey released by the Pew Research Center found that Americans are more partial to Jews than Catholics, Evangelicals, Muslims or atheists), anti-Semitism is on the rise elsewhere, a phenomenon that's been exacerbated by Israel's recent conflict in Gaza.

A survey released by the ADL that chronicled the attitudes toward Jews in over 100 countries found that anti-Semitic attitudes are persistent and pervasive around the world, with more than one-in-four adults, or 26 percent of those surveyed, being deeply infected with anti-Semitic attitudes. The survey was fielded between July 2013 and February 2014 and polled 53,100 adults.

In a New York Times opinions piece on Thursday titled “Why Jews are Worried,” Deborah E. Lipstadt, author and professor of Holocaust studies at Emory University, cited some of the numerous incidents of anti-Semitic violence in Europe over the last few years.

“It would be simple to link all this outrage to events in Gaza. But this trend has been evident for a while,” she wrote. “I am unpersuaded by those who try to dismiss what is happening as ‘just rhetoric.’ It is language, after all, that’s at the heart of the ubiquitous slippage from anger at Israeli military action to hatred of Jews.”