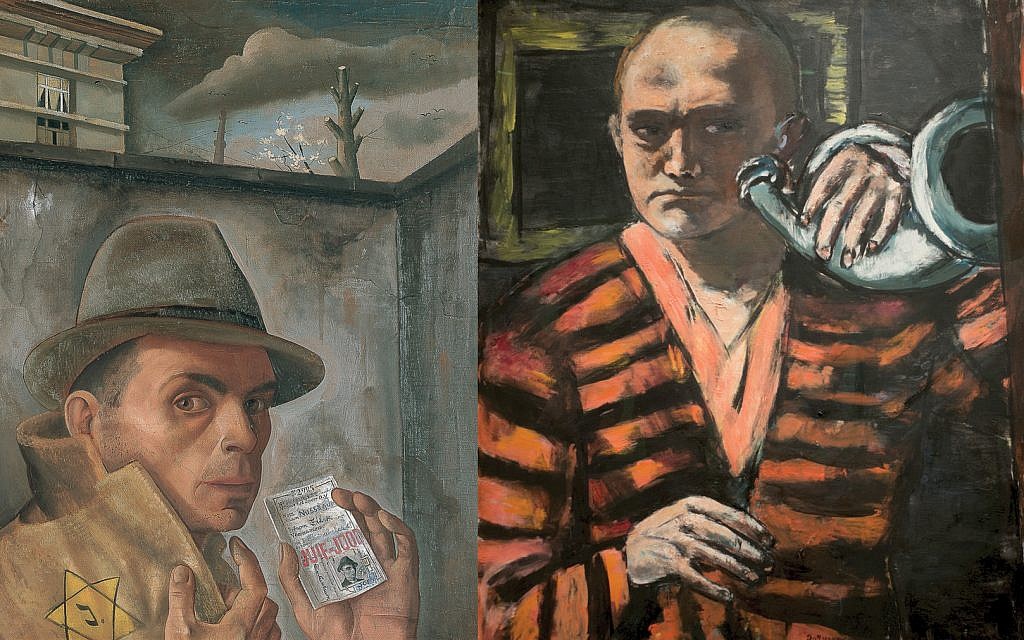 ‘The Self-Portrait from Schiele to Beckmann” at New York’s Neue Galerie lets us peer into the faces, and perhaps the souls, of 33 German and Austrian artists from the first half of the 20th century, an epoch defined by two World Wars and the Holocaust.

The 75 canvases, watercolors, photographs and etchings on display are not to be confused with today’s ubiquitous cell phone selfies, Tobias Natter, the exhibit’s curator, told The Jewish Week. Better to regard them as self-reflections produced out of the artist’s inner necessity. They ask, “Who am I?” he said.

Some also comment on the era itself. The celebrated German artist Max Beckmann (1884-1950), for instance, completed his “Self-Portrait with Horn” in 1938, soon after the Nazi regime forced him from his teaching position and removed 500 of his works from German museums, deeming them “degenerate.” Here he solemnly casts his darkly shaded eyes on the gray and black horn grasped in his left hand. Its position mid-way between his ear and his grimly closed mouth makes it unclear whether he will use it to sound an alarm or employ it as a hearing aid as he awaits alarms that are yet to be sounded.

But the works that confront us with the most provocative and distressing questions are by three Jewish artists, only one of whom outlived World War II and the Holocaust: Felix Nussbaum (1904-1944), Ludwig Meidner (1884-1966) and Michel Fingesten (1884-1943). Each of these artists was guilty of nothing more than the crime of painting while Jewish in Nazi Europe. 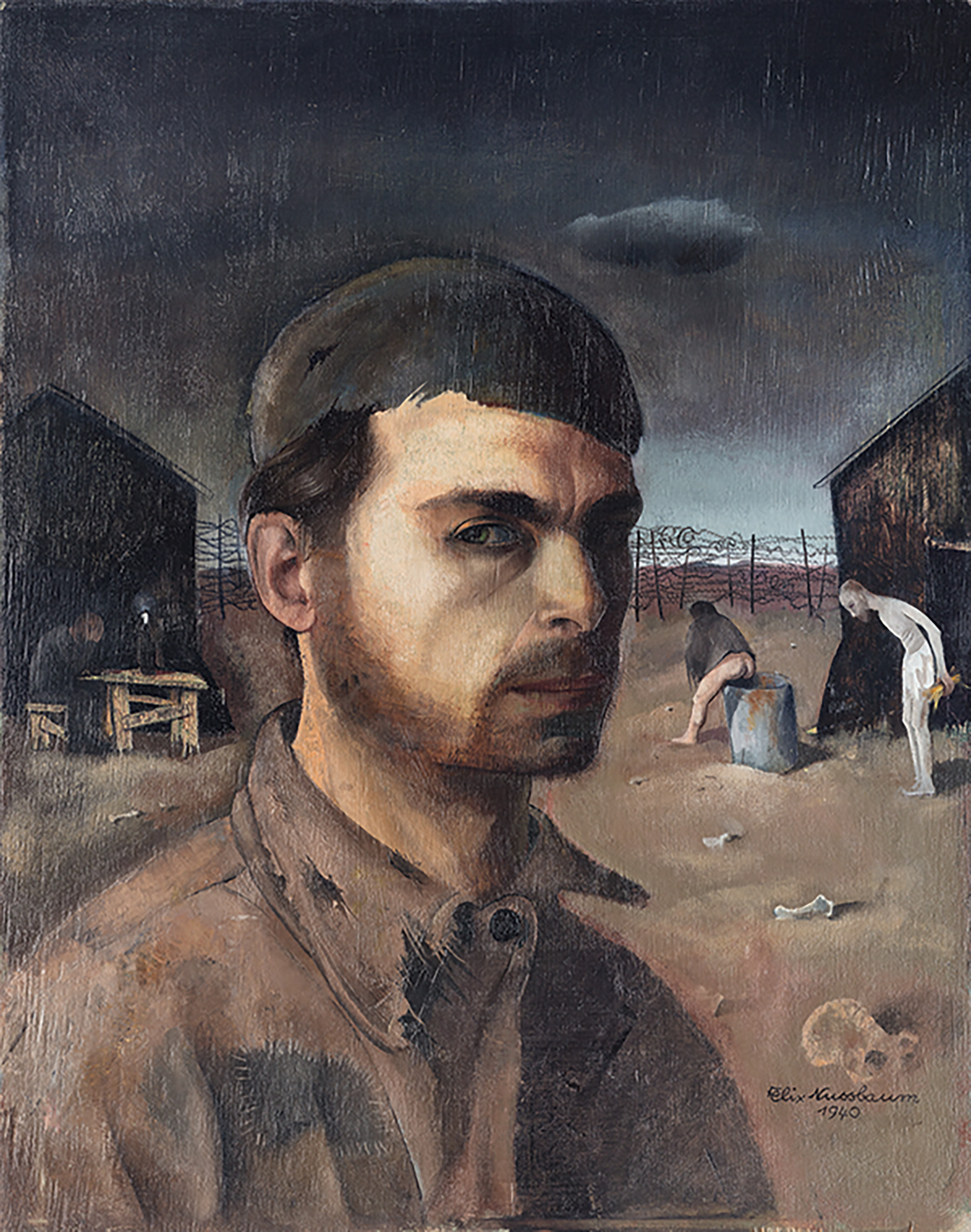 “Self-Portrait in the Camp,”

Felix Nussbaum had been an artist on the run since leaving his native Germany in 1932. He had gone to Rome that year on a fellowship to study at the Berlin Academy. But in 1933, with Hitler and his anti-Jewish regime now in power, the grant to the non-Aryan Nussbaum was rescinded. Thus began 11 years in exile and in hiding, primarily in Brussels, before being captured and sent to his death at Auschwitz in 1944.

In “Self-Portrait in the Camp” from 1940 Nussbaum portrayed himself in tattered prison uniform against a queasy colored sky, with a backdrop of barbed wire and a feces-smeared can where an inmate is seen defecating. He painted it shortly after escaping from the St. Cyprien internment camp in France, where the Gestapo had sent him. He and his wife spent the next four years in hiding, where he continued to produce haunting images, all the more eerie for the real-life horrors they depicted.

“Self-Portrait with Jewish Identity Card” is one of his last paintings, completed just months before he and his wife were captured, deported and killed at Auschwitz. With his coat collar raised and his hat covering his head and shading his brow, Nussbaum wears the haunted expression of someone in hiding — as indeed he was. And he tells us why, through the yellow Jewish star on his coat and the identity card stamped in red, in all caps, JUIF-JOOD. With his figure up against a literal wall, he is revealing to the viewer the secret reality of his existence, of his identity as a Jew, and as a hunted, almost caged being. Still, another world continues to exist above and beyond the wall. It can be seen rolling across the upper part of the canvas, almost like a mural telling a story. 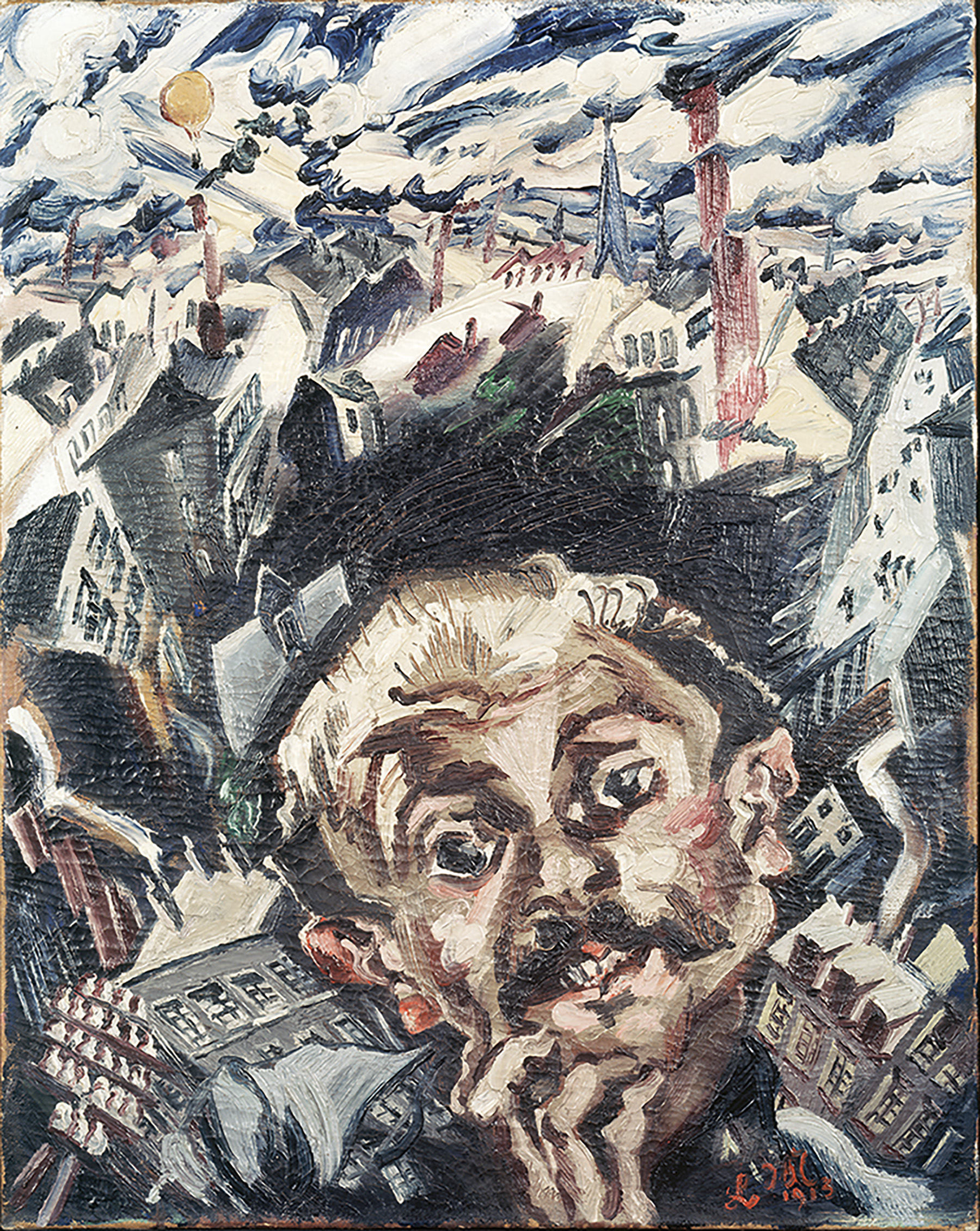 Ludwig Meidner’s “I and the City,” from 1913. According to the show’s curator, the frenzied painting is almost a prophecy of the catastrophic destruction to come in World War I.
© 2019 Ludwig-Meidner-Archiv, Jüdisches Museum der Stadt, Frankfurt am Main, Germany

To the left is the realistically rendered image of the top floor of an apartment building. Evidently this is the place where Nussbaum and his wife once lived; but now the windows are dark, the household within apparently empty, as if to say that life is gone forever. Next to it, a bleak storm cloud presides over a patch of blue light and the two top branches of a tree. One branch is cut off, clearly dead; but the other flowers with pink blossoms, a sign of spring and perhaps even some hope for survival. A third canvas, “Self-Portrait in a Shroud, (Group Portrait)”, shows him holding a green sprig, even as a rope coils around the figures beside him.

By contrast, Michel Fingesten, best known as an illustrator and graphic artist, depicts himself in a playful mood in a watercolor from about 1920, the title page from a book collecting “Self-Portraits by German Artists.” He wittily captures all the clichés of the artist’s life at once, showing himself looking slightly crazed with bulging eyes before his easel in a garret studio lit by a single bare bulb; a nude model idly combs her very long hair, while a bottle and a martini glass await him beneath his chair. There is nothing here to foreshadow his fate. He fled Germany for Milan in 1936, was sent to an Italian concentration camp in 1940, and died shortly after the camp’s liberation in 1943.

Ludwig Meidner painted “I and the City” in 1913; it is an intensely jarring amalgam of self-portrait and Apocalyptic cityscape. Fractured fragments of houses, factories and churches swirl in a frenzy of agitation around the artist’s angst-ridden face. Natter calls it “an amazing painting,” almost a prophecy of the catastrophic destruction to come in World War I. But that is only one aspect of this multifaceted artist. In the next decade, Meidner turned to Jewish and religious themes, reflecting his own growing observance. Although he succeeded in leaving Nazi Germany for England in 1939, he was soon interned on the Isle of Man as an enemy alien for the remainder of the war. Impoverished and unappreciated, he nonetheless continued to paint, and in 1953 returned to Germany, where he died in 1966.

“The Self-Portrait from Schiele to Beckmann” is an important exhibit, not least for its glimpses of the lives and works of these three artists.

“The Self-Portrait from Schiele to Beckmann” opened Feb. 28 and runs through June 24 at the Neue Galerie, 1048 Fifth Ave., neuegalerie.org.