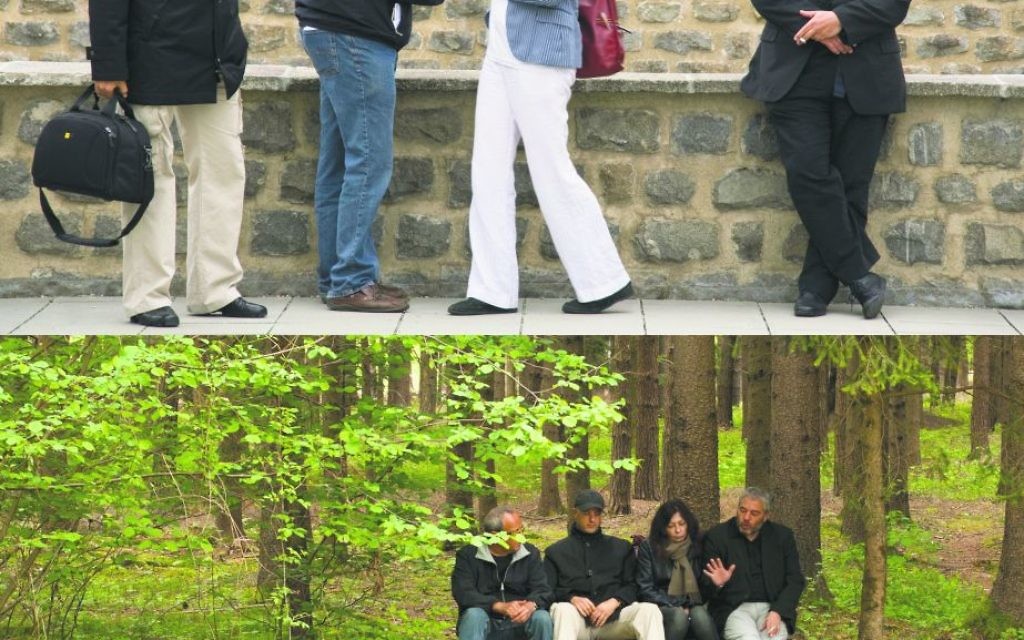 The first image one sees in David Fisher’s new documentary “Six Million and One” is a crumbling stone doorway bridged by a spider web. The visual irony is striking, with the rough yellow stone breaking down, the wispy lacework sturdy and undamaged. That irony is, perhaps, at the center of Fisher’s film.

I say perhaps because Fisher’s film, which opens on Sept. 28, is a singular, even peculiar exercise in familial self-examination, a follow-up to his earlier work, “Love Inventory,” which explored the relationship between his mother, a survivor of the Shoah, and her children. With the new film, Fisher continues that exploration with the emphasis now shifted to his late father, but the real emphasis is on how he and three of his four siblings interact on a trip to Austria to revisit the places in which their father was imprisoned. As a result, the film’s intentions and Fisher’s decisions are sometimes a bit baffling.

For the first 50 minutes of this 93-minute film, Fisher surefootedly takes both his audience and his older sister Esti, and younger brothers Gideon and Ronel through the pages of their father’s unpublished memoir of surviving in the little-known Austrian concentration camp of Mauthausen-Gusen. We meet several of the GIs, now in their late 80s, who liberated the camp. Even now, well over 60 years later, these men are traumatized by the memory of the few hours they spent in the remnants of a Nazi-made hell. One of the men still receives treatment for post-traumatic stress disorder from the local VA hospital. Another says tersely, “We saw the worst. Human beings at their worst.”

In his memoir, Joseph Fisher is equally candid and telegraphic: “Even at my happiest moments — I’m still there.” And gradually we begin to sense how their father’s deeply buried melancholy and trauma affected his offspring. As Esti says, their childhood family life was “like growing up in a freezer.”

This remarkable footage is deftly put together by Fisher with a structure that cunningly echoes the apparent irony of the first shot. Stories of his father’s experiences are punctuated by vistas of fertile and richly colored landscapes. And the film’s larger structure is tied together by shots of a young woman standing slightly off-center in the frame reading a ghoulish list of 63 causes of death in the Mauthausen-Gusen camp.

But in the film’s second half, Fisher’s interest veers wildly like a car on a patch of black ice. The four siblings have a series of lengthy conversations in which they try to make some sense out of their emotions, their roles in the family constellation and frequently needle one another playfully. There are points at which their reactions to sights and stories on their macabre tour are profoundly revealing. In the barracks at Mauthausen-Gusen, Ronel, the youngest of the quartet and the one most resistant to making the trip, squirms and paces as if he were genuinely experiencing his father’s own helplessness. Shortly after he gets into a wrangle with David about seeing the gas chambers there, the two have an exchange that produces dialogue worthy of Woody Allen at his most mordant.

Therein lies the problem with the film. Given the power of the first half, the shift in focus to the real but comparatively mundane issues (or the mundane terms in which they are discussed) is a severe disappointment. The four Fishers are genuinely likeable people and their struggle to understand and master their feelings is painful and worthy of the seriousness with which the film treats it. (Indeed, I would say that the position of second- and third-generation survivors is a subject that hasn’t been sufficiently explored by filmmakers.) But somehow one feels that the last half of this film is neither the time nor the place to do it.

“Six Million and One,” produced, written and directed by David Fisher, opens on Friday, Sept. 28 at the Lincoln Plaza Cinema (Broadway between 63rd and 64th streets). The director will be present to take audience questions the opening weekend of the film’s run. For information, call (212) 757-2280, or go to www.lincolnplazacinema.com.