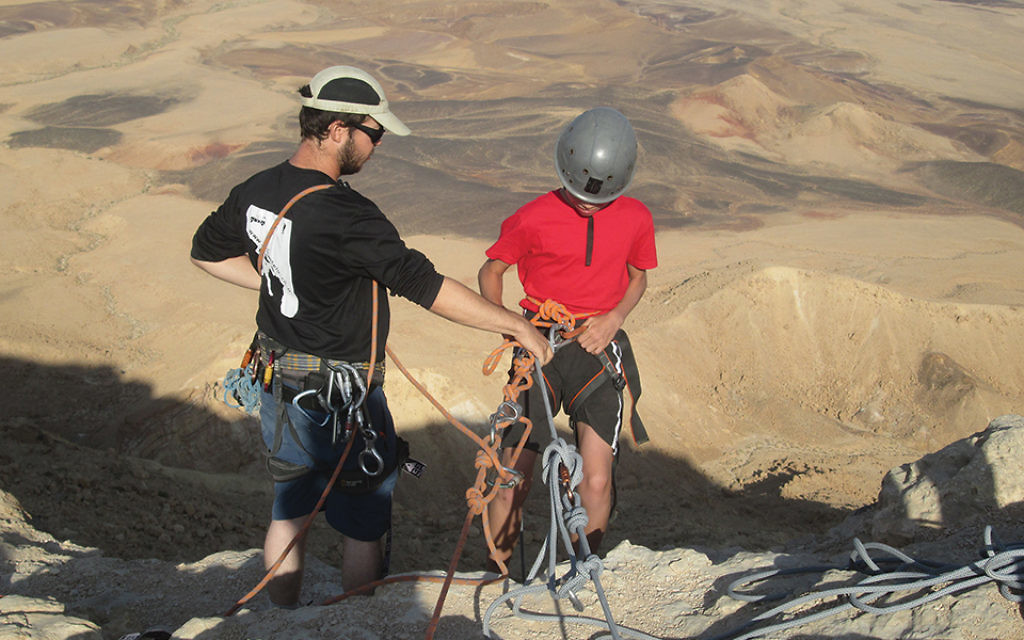 When, on a scorching July day, a friend suggested I visit the Ramat Hanegev (the Negev Highlands) in southern Israel in August, my first reaction was “no.” Just the thought of traveling to the Negev, which runs several degrees warmer than Jerusalem, put me into a sweat.

Then I researched the location and learned that the “highlands” are cooler than the rest of the Negev and that the summer nights can be downright cold thanks to its desert location. I discovered, too, that Ramat Hanegev is huge — its landmass comprises more than a fifth of the country — but has only 5,000 residents scattered in a variety of communities, including kibbutzim and moshavim.

Sde Boker, where David Ben-Gurion, Israel’s first prime minister, spent his golden years, is located in Ramat Hanegev. Admiring photographs of this part of the country, with its wide-open vistas and hidden desert oases, and after talking over the challenges of such a trip with our 13-year-old sons, we decided to accept an invitation from John Krivine and his wife, Marion, owners of the Krivine Guest House (krivine-guesthouse.com) and the Har Hanegev municipal council.

Our three-day stay in Ramat Hanegev began in Mitzpe Ramon, a small town at the edge of the vast Machtesh Ramon (Ramon Crater), a 25-mile-long, 1,600-foot-deep crater (it is six miles at its widest point) created millions of years ago by water erosion from an ancient sea.

To avoid the hottest part of the day we arrived from Jerusalem in the late afternoon, a sensible plan that provided us with ample time to explore Mitzpe Ramon, the home of the renowned Beresheet Hotel as well as less-expensive accommodations, and spend time at the crater.

Given a choice between a jeep tour in the crater and rappelling, we chose the latter at the urging of our boys, who were both terrified and excited at the prospect of rappelling down a cliff (though we couldn’t see the bottom, the easiest route was just 45 feet down). Our guide, Adam Sela, was beyond patient.

That evening we dined at Hadassar, a much-beloved vegetarian restaurant and country store (soaps, organic vegetables, jewelry) on the outskirts of Mitzpe Ramon.

At the restaurant we donned warmer clothing and headed out for a night of stargazing led by U.S.-born Ira Machevsky, who, during the warmer months, sets up telescopes and folding chairs in the desert for groups and individuals. Though our boys became impatient after the first hour, they were excited to see details of the moon not visible to the naked eye.

The morning of the second day the boys went on a guided bicycle ride (bikes and helmets provided) on the edge (think cliff) of Nahal Zin with a guide from Geofun at Midreshet Ben-Gurion, and returned for a leisurely breakfast in the Krivine’s garden.

That morning I accompanied Marion on a tour of Ben-Gurion’s Hut on Kibbutz Sde Boker, a short drive from Midreshet Ben-Gurion. Given the materialist lifestyle of our current leaders, Ben-Gurion’s “hut” — actually a very small house that was left exactly as it was when he died in 1973, is a portal into a simpler, more modest way of life.

At 3:30 p.m. Lior Schwimmer, a ranger with the Society for the Protection of Nature in Israel, drove us and some members of the Krivine family in his jeep to Ein Akev, a natural, shaded desert spring and pool situated in a gorgeous but rugged wadi. Along the way he showed us some of the ancient rock art discovered nearby.

As the jeep forded dry riverbeds (if you have back pain this particular jeep trip may not be for you) we spotted several intrepid teens returning from the spring and making their way up the steep wadi, on foot despite the searing heat. Having driven most of the way, it took us about 15 minutes to hike to the deep pool of fresh water fed by a spring and shaded by a cliff. We spent nearly two hours exploring the desert plants and swimming.

That night we again put on an extra layer for a jeep safari led by desert ecology and animal behavior specialist Dr. Haim Berger to explore animal life in the highlands (negevjeep.co.il). From the jeep, holding strong flashlights, we spotted foxes, gerbils, an ibex and a stork. On foot we searched for and found scorpions. Under Berger’s direction we touched them — a brave move for me. (negevjeep.co.il)

On the third and final day Yuval Hadar, a tour guide and official at the nearby field school, provided us with a detailed explanation of the local snake population and extensive hands-on interaction with it. A fantastic, kid-friendly opportunity.

After a dip in the community’s pool we headed to lunch at the Kornmehl Goat Cheese Farm and Restaurant (kornmehl.co.il), where the fabulous goat cheese pizza and other dishes made up for the lack of air-conditioning.

Our next stop was Kibbutz Revivim, which in 1948 was the southernmost Israeli kibbutz and the front line against the Egyptians. Visitors can visit the caves, furnished with period equipment, where Israeli fighters lived during Israel’s War of Independence.

Our last stop was the Rota Winery, a boutique winery with a small but excellent collection of reds and whites.

As it turns out, our visit to the Negev Highlands was far too short. Next time we will explore the Rimon Crater by jeep, do more rappelling and hiking and perhaps go on a ride in a hot-air balloon. We were surprised to learn that summer is a great time visit.

The Krivine’s guesthouse offers four one-bedroom “zimmers” — tastefully decorated suites (which sleep up to 4) decorated with finds from the couple’s far-flung travels. The community, which has the feel of a kibbutz, offers magnificent views of Nahal Zin, home to a herd of Nubian ibex, desert goats. One of the highlights of our stay: waking up to a dozen ibex in the garden.