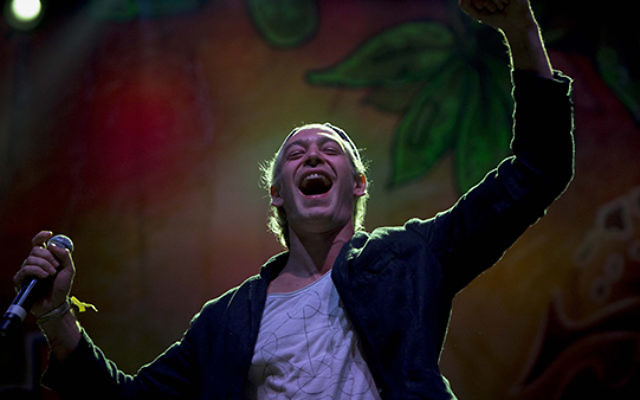 <Matisyahu made it: He performed this summer at a music festival in Spain after his revoked invitation was reinstated. Getty Images

Although surprising, it is not inconceivable that a traditionally Orthodox teenager in Brooklyn would be listening to the same Matisyahu album as a Jamaican Rastafarian teen in the Bronx. Musical icon Matisyahu, born Matthew Miller, began his career in the early 2000s as a reggae performer. He was raised in White Plains, N.Y., and his parents attended a Reconstructionist synagogue, but he was drawn to a chasidic lifestyle and identified by his Hebrew name, Matisyahu. While rapping he sported a long beard, payes and a kipa. His talent and his music — which often deals with spiritual themes — made him extremely popular despite his unusual look and observance of traditionally Orthodox Jewish law.

Regardless of Matisyahu’s religious observance, he rose to the top of his field and in 2005 his single, “King Without A Crown,” was number 28 on Billboard’s Top 100. Most impressive is that Matisyahu was accepted on the merit of his work, despite his visible Orthodoxy and the Jewish ideas expressed in his music. Although Matisyahu reportedly observed negiya (not touching the opposite sex until marriage) and would not perform on Shabbat, he managed to balance being an observant man while achieving worldwide popularity and mainstream appeal.

Matisyahu’s success together with his devotion and loyalty to Judaism, gave Jewish people, especially youth, a sense of pride and a worthy role model. Matisyahu was successful in conveying a message: maintaining your identity while rising to the top is an attainable goal.

In my opinion, Matisyahu’s most important musical contributions for Jews were his two Chanukah songs: “Miracle” and “Happy Hanukkah.” These songs provide music for Jews during a season when radio stations play Christmas songs around the clock. Matisyahu instilled in me a tremendous amount of Jewish pride.  Instead of the exclusionary feeling Jews usually have around the December holiday season, I feel proud hearing Matisyahu’s Chanukah songs being played in my favorite clothing store in the mall or blasted from the car speeding by me on the street in my Jewish neighborhood.

Although he shaved his famous beard in December 2011, Matisyahu remained proudly Jewish. In addition to making national media, his shave shattered the hearts of Jewish Orthodox youth who had finally seen someone who looked and acted like them make it in American popular culture. This shift in his religious views confused me because I always admired Matisyahu for finding the balance between religious observance and material success. Although no longer identifying as Orthodox, Matisyahu still gives Jewish youth a reason to be proud.

This past summer, Matisyahu was booked to play at the Rototom Sunsplash music festival in Spain until activists from the Boycott, Divestment and Sanctions (BDS) movement pressured the organizers to disinvite him because of his refusal to issue a statement in support of a Palestinian state and a condemnation of Israel’s so-called “war crimes.” He was removed from the musical lineup. After strong backlash from the international Jewish community and the Spanish government, the festival reinstated his invitation. Matisyahu proudly attended and sang his song “Jerusalem,” in which he expressed his love for Israel, in front of an audience waving Palestinian flags. I felt disappointed by Matisyahu’s decision to no longer identity with Orthodoxy, but those proud feelings resurfaced when he stood up to anti-Israel antics. He proved himself a proud Jew and supporter of Israel.

Matisyahu’s celebrity status is important because it showed that America is a country where performers are judged on the merit of their work and not their religion. Matisyahu’s success is also a credit to the American people’s tolerance. His success sends a message to Jewish kids that they can dream big, because if they are talented enough, they will make it while remaining steadfast in their commitments and beliefs.