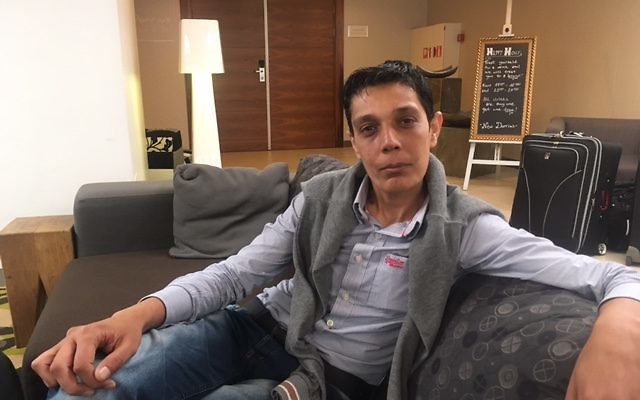 The question:  Should we allow a large number of refugees to come to the United States to live?  The answer in a Gallup poll was 21 percent yes, 72 percent no, and seven percent had no opinion.  This is not about our response to the Syrian refugees today; it comes from a 1938 Gallup Poll about allowing European Jews into the U.S.

In a 2015 Gallup Poll, 60 percent of Americans oppose letting in Syrian refugees, and that sentiment has only increased in the past year.  The Syrian situation is the largest crises since the Holocaust.  Before the civil war in Syria and the mass atrocities started five years ago, Syria had a population of 22.5 million. Today there are less than 18 million people. Five thousand people are fleeing every day, an estimated 400,000 have been killed, 12 million are displaced from their homes (4.8 million refugees, 7 million Internally Displaced Persons) and hundreds of thousands lie in prison because of their political views.

I just returned from a visit to Berlin and Amsterdam to “bear witness” to the plight of Syrian refugees, and to try and understand why countries like Germany and the Netherlands have been so welcoming while Americans, including the Jewish community, have been so reticent to help.

I made the visit, in part, to deal with my own fears of terrorists possibly entering with the refugees, to see what lasting lessons have been learned from the Holocaust, and to infuse the definition of refugee with personal meaning. I have come to understand why this refugee crisis and its impact directly connect to the Jewish story.

In my two weeks in Europe, I met with many refugees, as well as humanitarian, Jewish and government leaders.  I saw the shelters where refugees hold out hope that the next day might be better.

Of course, the political situation in Syrian is a nightmare that is extremely complex and nuanced.  However, the human suffering it has caused screams out to us for response.  Three of the people I met made a lasting impression on me, offering insight on what this genocide by ISIS of the Yezidi people, Christians and Shia Muslims in Iraq and Syria, and the horrible massacre of civilians in Syrians, has meant.

Documenting the tragedy: Filmmaker Duzen Tekkal with a group of refugee children.

Duezen Tekkal is a most personable Yezidi woman who is a German television journalist, author, and filmmaker. She wanted to know more about her roots, her people, and her history and joined her father on a trip to Iraq in 2014. Yezidis practice a 4,000 year-old tradition that combines Christian, Jewish and Muslim practices. There are about one million Yezidis in the world, half of them living in great peril in the Ninewa province of Iraq, and 100,000 living in Germany, most of whom are well integrated into German culture.  ISIS has pillaged Yezidi villages in Iraq, raped women, killed may Yezidis, and seeks to destroy the entire population.

Duezen is passionate about making the world aware of the plight of her people and she tells the story of the horrors her people have undergone in a compelling film: "Hawar – My Journey To Genocide,” which depicts the brutal ISIS persecution of her people.  Hawar means “cry for help” but is now synonymous with genocide.  She lamented the betrayal of her neighbors, and the scant interest the world has displayed for the genocidal plight of her people.

Chantal Suissa-Runne, is a Dutch Jew filled with boundless energy.  She is married and the mother of two young daughters. A descendant of Holocaust survivors and a product of Jewish summer camps, she serves on the board of the Liberal Jewish Community of Amsterdam. Deeply involved in interfaith activities in Amsterdam, she started a successful Jewish–Muslim Young Professionals Leadership Program, and is editor of the largest interfaith and intercultural online platform in the Netherlands.

I meet Chantal at her office, where she introduced me to Muhammed, a 22 year-old leader of the Syrian Volunteers Network, which he founded to help Syrian refugees.  Chantal is the first Jew he ever met.  Muhammed fled Syria and journeyed to Germany on the perilous Balkan route. He is studying at a university.  Chantal is anchored in Jewish values, and those values have inspired her to embrace the “other.” She is deeply committed to finding a way to really welcome in the Syrian refugee community and to help combat anti-Semitism and Islamophobia.

In Amsterdam, I also met Mazen al-Hamada, whose story was featured in a captivating New Yorker article by Ben Taub last spring. This Syrian refugee told of growing up and living a middle class life in Deir Ezzor. The youngest of 17 children, he had a good job as an engineer, and a close family. But he suffered after he denounced the human rights violations of the Assad regime.

One can see on Mazen’s face what he has been through –years in prison, horrific torture, his world destroyed. His journey to Holland was one many have made:  Syria to Turkey, a smuggler’s raft to Greece and a brutal journey of 1,700 miles to the Netherlands. I asked him how he managed to live now, and he burst into tears. “The government supports me…but I do not want that.  I want to work but that is not permitted.” Like many refugees, he yearns to return home and build a society infused with human rights and peace.

The Syrian Muslim refugees I met make it clear the Syrian people, like any other people, reflect the tapestry of humanity. So many are well educated and simply want to live in peace and pursue their dreams, free of terrorism.

I understand our concern that some refugees might be terrorists.

However, I also know we are a refugee people with an historic understanding of what it is like to lose everything.  I also know that Jewish values are clear about pursing justice for all, and that if we do not stand with other Americans in helping to open our doors, we will have to examine our consciences and take on the burden of responsibility that we just stood idly by.

In these dark times it is courageous people in their thirties like Duezen, Chantal and Mazen, and many others, that shine a bright light and seek to build bridges of understanding and reconciliation.

The Syrian refugee crisis is the great moral challenge of our time; it may very well define who and what we are as a nation. Now is the time to grant asylum to more refugees and to do proper vetting so that we can protect our safety.  Now is the time for the Jewish community to host Syrian refugees in their communities.  Now is the time to open our arms and embrace the refugee.  It will take courage. However, the risk in not acting is that of losing the soul and character of our people – and that is a risk we cannot assume.

Rabbi Lee Bycel is rabbi of Congregation Beth Shalom in Napa and an adjunct professor in the Swig program in Jewish Studies and Social Justice at the University of San Francisco.  He is a member of the United States Holocaust Memorial Council. (The views expressed here are solely those of the writer).