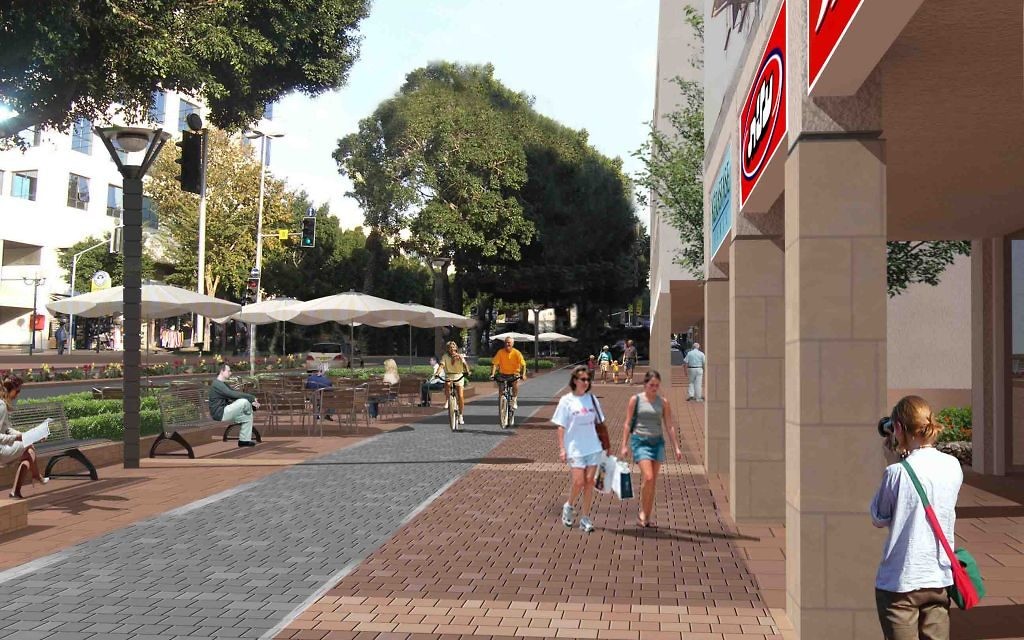 In this affluent Tel Aviv suburb, you can get Gatorade there, too, and American candies can be had on the grocery store shelves. And you can join the Penn Club and reminisce about the old college days in Philadelphia.

“I would say Ra’anana is the Great Neck of Tel Aviv,” said American Joel Leyden, president of the Leyden Communications group, founder of Israel News Agency and a Ra’anana resident for the past 10 of his 22 years in Israel. “Ra’anana really stands out as the most cosmopolitan, most modern town in the country.”

And while the influence of American culture can be felt in much of Israel, it’s particularly strong in Ra’anana, the suburb to beat all other Israeli suburbs, to hear the locals tell it.

As the city life gradually began to materialize in the small but vibrant new town of Tel Aviv, villages nearby — that eventually became suburbs of the city — sprung up nearly simultaneously.

One of these suburbs is Ra’anana, located about 12 miles northeast on the Ayalon 20 highway from the buzzing city of Tel Aviv. Ra’anana, also known as the Pearl of Sharon, was founded in 1922 by immigrant New Yorkers, members of the Ahuza Alef – New York Association, who are remembered in the name of the town’s main thoroughfare, Ahuza Street. What began as empty farmland cultivated by a few Arab residents eventually became home to American-inspired, upper-middle-class suburbia, high-tech innovation and an educational system coveted around Israel, according to city council members and residents.

“If you look at suburbs versus the big city, in Ra’anana there’s a feeling that it’s still a small village,” said Shay Even, 25, the youngest member of the town’s city council, who has been involved in local politics since the age of 14. “Everybody knows each other and it’s a very community feeling.”

Originally, Ra’anana was a Turkish and Arab village, filled predominantly with farmland, dirt roads and cattle. The initial New York group first came to the area in 1912 to purchase land from Arab residents there. But in 1922, more Americans began migrating to the area, purchasing plots of land from the Arab residents similar to the way prior Jewish pioneers had done so in nearby Tel Aviv.

“In those times the pilgrims who came here first looked for land that they could buy from the local Arabs that would be good for agriculture,” Even explained. “So they just spread around the Arab villages.”

By 1926, the municipal planters’ group had founded a lucrative community orange orchard, and a photograph of 1934 Ahuza Street shows camels trotting down the lanes rather than traffic-jammed automobiles.

Today’s Ra’anana is a suburb of 78,000 that more than lives up to American standards, in a way drastically different from other Israeli towns. In addition to the baseball diamond and the Gatorade, the town is currently investing three million shekels ($730,000) in new squash courts, according to Even.

“Because of the high-tech companies, a lot of people in Ra’anana travel to the United States a lot,” Even said, citing his own brothers as typical examples.

Though many people do work in the high-tech companies located in Ra’anana proper, most drive to the Tel Aviv area each morning and return at night, similar to the way Americans often commute from suburb to city.

Though the majority of the city’s population is now native Israeli, there is still a stronghold of American olim, as well as Brits, South Africans, South Americans, Australians and most recently, Francophones. Unlike most other towns in Israel, this suburb has a full-time international relations department as part of city government, Leyden added.

“In our local election we printed flyers in English and Spanish,” Even said, noting that Ra’anana school students begin learning English in kindergarten, whereas most Israeli schools don’t start English instruction until fourth or fifth grade. “There are some people who walk in the streets and don’t speak Hebrew.”

“A lot of Anglo-Saxons and a lot of New Yorkers are here,” Hoch said. “If there is really this phenomenon of the economy crashing in the States, it might be interesting to say here’s a mecca for New Yorkers to settle in.”

Hoch, who notes that a strong pocket of American Ivy League graduates live in this area, hosts an annual Ivy League Regatta in next-door Herzliya Marina, where the eight Ivy League schools (minus Princeton and plus MIT) compete against each other in a boat race.

With so many residents who believe in the importance of education, Ra’anana boasts one of the best school systems in all of Israel, producing a large number of Air Force fighter pilots from Ostrovski High School in particular, according to Even.

“Ra’anana is allocating a lot more money from its city council budget to education than are other cities,” he said, noting that education in Ra’anana is not just about good grades. “Because the population here is so strong financially, they support a lot of other activities like sports, computers and robotics.” Nearly every year, Ra’anana wins the national robotics competition and often competes in the United States, he added.

To its residents, Ra’anana really lives up to its title of the “pearl” of the Sharon region — young people may move to Tel Aviv for a few years, but the move is rarely permanent, according to Even.

“Everybody is saying at my age that they can’t afford to live here now, but they’ll come back when they’re 30 and raise their kids here,” said Even, who plans to spend the rest of his life in Ra’anana.

Whether the Ra’anana Even’s friends return to will be the one that they grew up in remains to be seen, however.

The growth of the fervently Orthodox community there is sparking tensions between the newcomers and the secular and Modern Orthodox population that have lived in the city for years.

“With the influx of religious people from France, there’s a big argument between secular and religious about the character of the city,” Even said.

The fervently Orthodox have only begun to settle in Ra’anana in the past 10 years, and currently 3 percent of residents are “black hat.” In today’s city council, Even’s liberal Meretz party holds five of 19 seats, while a haredi faction holds four. “There’s always those two sides that fight each other,” he added.

Currently on Shabbat, the stores and restaurants in the outside ring of Ra’anana are allowed to remain open — including a supermarket that sells pork — yet stores in the center of the city are closed, a policy supported by secular residents who appreciate the peacefulness of Saturday quiet, Even explained.

But ultra-Orthodox groups are now attempting to influence the status quo that Ra’anana has enjoyed for so many years, Even said, noting that even this past weekend, a group of religious youngsters rioted during Shabbat, demanding that a street be closed.

The street remained open, and so far, the secular population still has the strongest voice in Ra’anana.